Hali was about to press the “antique” feeling call button when her own phone began to ring. Even Conan froze and turned to look her way. She took a quick glance and saw that it was Lyris. She looked up at Conan, who must have been able to see the look on her face through the blackness of the room. “Who is it?” he asked in a low tone.

Hali was shaking a little bit, but she had a feeling she should answer it, so she did. “Hello? Lyris, everything okay?”

“Hali? Oh my God! Hali, you have got to help me, I’m surrounded,” Lyris’ panicked voice broke through the phone.

“Where are you?” Hali asked.

“I was trying to come over! I’ve been so worried about you and wanted to check up on you after your shift, but now I’m surrounded!”

Lyris’ voice was cracking and it sounded like she was traumatized. Hali didn’t know what to make of the situation and tried to figure out what she could do to help. “Where are you?”

“Outside, in the back alley! Please! help me!” Lyris cried for help again, but Hali didn’t understand. She moved to the window Conan had just looked out and drew the curtain back. She could faintly see the outline of huge dogs outside, standing still in waiting. She angled herself to look down the alley more and could see some more outlines of dogs. She could also see the form of a small human frame with four dog shaped guards around her.

“I can see you I think,” Hali squinted.

“Y-you need t-to help-p mee!” Lyris cried again— tears choking her words. Hali didn’t know what she could say or do. She turned to Conan, who had probably heard the whole conversation; if his hearing was as good as his keen sense of smell.

“Hang up,” he said in a whisper. “We need to call for backup and I need to get out there.”

She hung up and put her phone back in her pocket, reaching for his phone again and flipped it back open, ready to call Eleanor. She could hear Conan moving closer to her, stopping in front of her. The faint light from his phone shone on his serious face, as well as his bare chest, which she tried her best to not focus on. This was not the time. Her eyes met his as he spoke with a serious tone. “Make the call, I’m going out to distract them until they arrive.”

Hali nodded and pressed the green call button, bringing the phone to her ear. She saw his form faintly moving away; his body contorted and he grunted and groaned as he shifted forms. The swift transition ended with his wolfish paws padding across the kitchen floor. The back door creaked as Conan pushed it open, slipping outside. Instantly, she heard the wolves getting into it and felt her heart leap into her throat. Hali was in no danger at the moment, but she wished her power worked for sensing other people too; she had no idea if Conan would be able to survive. The phone rang a couple of times before there was a click and an older woman’s voice broke through.

“Ah, Conan, why would the likes of you be calling me so late? You didn’t somehow manage to pocket dial me with that old phone, did you?”

“I’m Hali, Conan’s roommate, he asked me to call you,” Hali stated.

“Ah, you’re that artist tenant of mine,” Eleanor stated, “The house isn’t on fire, is it?”

So this woman was the building owner and Amy’s grandmother. Hali didn’t know what she was supposed to say to her. Conan hadn’t mentioned whether the woman knew anything about the werewolves or not. Hali was unsure how crazy she was going to sound, so she fought to keep herself composed despite the sounds coming from outside. Conan needed help right now.

“N-no, the house isn’t on fire. He wanted me to call and ask for your help,” Hali struggled to explain, “He’s outside and there are.... um… wolves outside and—“

There was a sigh from Eleanor. “Alright. We will be right over. I’ll send Amy down.”

There was another click and she was gone. Hali really hoped this woman was taking everything seriously, especially with how short she was with her and how quickly she hung up. With the addition of saying she’d get Amy downstairs? What the hell was an elementary school teacher going to do?

Hali flipped the phone closed and put it down on the counter. Pulling out hers yet again; this time, turning on the phone’s flashlight, she shone light into the darkness around her. Hali made her way closer to the open door and tried to see what was going on, but she still could only see several large shapes rolling around on the ground. The feeling in the pit of her stomach was still a dull ache and she didn’t know what to do. There was no way Conan could fight ten werewolves alone! She feared she would see him die in front of her.

There was a creaking of floorboards above her, then feet stomping down the stairs before someone burst into the room. Hali whirled around, shining her flashlight on Amy, who moved past her and was looking out the window at the persisting chaos. “Did Conan already go outside?” she asked. Giving her answer with a silent nod, Hali watched as Amy walked ahead of her and looked out the door to see what was going on. “Does that man ever like to get himself into messes. All right, time to get him out of this mess,” she sighed.

Amy was wearing her PJs and had a fluffy house coat over top. Or, she did, before removing it to place next to Conan’s clothes pile. She sniffed and stretched a little. Hali still had no sweet clue what was going on and tried her best to cope with all of this. She only got more confused when Amy turned to her. “Coming?”

I still don't believe Lyris isn't involved! Also I love that everyone is in on it besides Hali lol 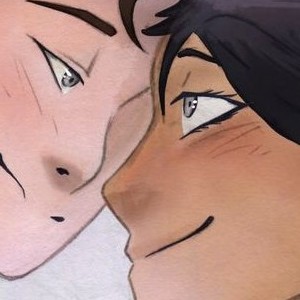