CW: Things get a little steamy.

The evening was warm. Eliza looked up at the night sky seeing it was a clear night, the stars shone brightly and the moon lit the streets. She extended her slender arm out for the taller woman to take as they left the restaurant together. She personally thought the date had gone pretty well; Julia was nervous at the start but eventually relaxed as the evening went on. She had arranged for a private dining experience for them, the ambience was low and there was little to no distracting background noise for the wizard.

“How did you find that?” Eliza asked her as she guided her toward the direction of her apartment. Julia gripped her arm and tucked her curls behind her ear, she smiled shyly at the smaller woman.

“The food was good. Thank you.”

“I am glad to hear that. You still live in the same place, right?” Eliza asked.

“Yes. As is our custom, would you like me to carry you home?” Julia said with a small chuckle.

“That only happened twice, didn’t it?”

“No, any time we were at the same party I had carried you home. You were quite drunk those times; it’s no surprise you don’t remember.” Julia said openly.

“Is that so?” Eliza said amusedly, she glanced up at the taller women who sported a similar expression.

“Yes. Your drunken ramblings were extremely endearing. I liked the parts where you told me you were going to grow up to be a ‘tall beefcake’.” Julia said. Eliza looked up at her blushing, as she tried to recall these moments. She had no recollection of ever saying such a thing... although she was aware she had become blackout drunk a few times in her life. Noticing the wizard had the faintest smile, she realised she was being teased.

“I will have you know that I have impeccable muscles.” Eliza flexed her arm to show off the barest hint of a bicep to Julia. ”See?” The wizard immediately poked the soft tendon.

“I see. Very impressive, you could carry me home with those.” Julia said dryly before cracking into giggles.

“Lets not, we know how that would end. I can, however, escort you home.” Eliza responded with a laugh.

Julia’s grip on her arm tightened as they walked in the warm evening air.

Eliza looked up into the taller woman’s deep chestnut eyes, feeling her heart flutter. Her hand rested on Julia's firm bicep. Leaning up, she kissed her softly. Julia’s hand grasped her hip as the taller woman returned the tender embrace.

The bard pulled away from her, not wanting the kiss to end. She looked at her with a shy expression.

“Um... are you free on Lenyasday evening? I have a spare ticket for a musical I am attending and would love for you to join me.”

“Great! I'll pick you up at six. We can eat out and then go together.”

“I'll see you in three days, then. Good night.” A phantom of a smile graced Julia’s face, she leaned down and placed a lingering kiss on the bard's cheek.

Eliza glanced at Julia, who was enamoured by the musical. She felt butterflies in her stomach as she observed how her body language emanated enjoyment. She smiled as she looked back at the ballad being sung on stage between two star-crossed lovers. Reaching out in the dark theatre she intertwined her fingers with Julia’s; she was overjoyed when the wizard held her hand and gently rubbed her thumb against her knuckles, showing her comfort and delight.

She moaned softly, when Julia pulled her closer, her arms wrapped around her waist as their tongues danced with one another; sending sparks down to her core. Her hands gripped her muscular arms as she parted from her, her eyes hooded.

“I heard there is a conference being held on arcana this week.” Eliza said huskily. Her fingers trailed up the wizards defined muscles as they stood in the entryway of the wizards home.

“Would- would you like to go together?” Eliza asked.

“Oh. Yes! I would like that!” Julia said excitedly.

“Shall we meet for breakfast and go together?” Eliza asked. Happy to see how excited the wizard seemed.

“Yes. We can meet at Amit’s for breakfast at seven?” Julia said. Eliza smiled as she reached up towards the wizard, her fingers intertwining behind her neck.

“That sounds lovely.” Eliza said, connecting her lips against the wizards. She sighed into the kiss as the taller women bought her closer, her front pressed against the other woman; she felt herself become excited. Julia’s tongue brushed against her lower lip, pulling it between her lips as she sucked on it. Eliza’s body was on fire.

“Do- do you want to come in for a drink?” Julia asked her, in a surprisingly seductive voice. Eliza licked her lips and looked at the wizard.

Eliza glanced around the apartment, taking her shoes off at the front door. She navigated her way around the tower of books on the floor and into the living room. Not much had changed in the flat. It looked exactly the same as it had when she last visited.

“I’ll make a pot of red tea.” Julia said as she disappeared into the kitchen.

Eliza made herself comfortable on the sofa, tucking her legs under herself as she waited on the wizard. The property was tall and airy but felt a little cramped, the plants added a lovely addition to the flat otherwise it would be bare.

Julia placed a tea tray on the coffee table, there was a small bowl of salted nuts. Eliza looked at her, she looked stunning, she had taken off her dupatta and now she was in just her lehenga that revealed her muscular feminine figure. She sat down next to her on the sofa and smiled at her, her body pressed against her.

“Is for horses.” Julia responded, a twinkle in her eye. Her fingers drummed against her thigh, letting her know she was pleased with the pun.

“That’s terrible!” Eliza laughed, nudging Julia’s shoulder. Her hand lingered on her shoulder as she leaned in closer, licking her lips she asked.

Julia turned to face her, leaning towards the smaller woman, her hand resting on her slender thigh, her breath hot. “Yes.” Said the wizard.

Eliza heart pounded in her chest, the soft sensation of the other woman’s lips moving against her own shot sparks to her core. The bard wrapped her arms around the wizard’s powerful shoulders, bringing the taller woman closer to her. Their kiss turned from tender to passionate in mere moments, the bard leaning back on the sofa, guiding the wizard on top of her. Julia pulled back for breath but immediately began peppering kisses down her jaw, her lips traveled down her slender neck, she gasped when she licked her pulse point before she sucked on it, making her moan out loud. Her core throbbed at the sensations the other woman was driving in her.

Eliza’s arms snaked around the wizards back, her hands clutched onto her bare shoulder blades. A loud groan left her lips as she felt the wizards teeth nick her skin, she pulled back glancing at her neck before looking at the bard seductively. Her pupils blown out, she licked her full lips; completely unaware of the effect she was having on her.

“Can- Can I undress you?” Julia asked with a touch of apprehension. Eliza looked up at her dark eyes, licking her lips as her hands began to unfasten the top of her sherwani, the mage watched her fully captivated as she revealed skin, stopping just at her bosom before she let her hands tease the edges of her top.

“You can finish undressing me.” Said Eliza huskily, her fingers trailed down her exposed chest, enjoying how the wizard looked at her. “I want to feel you inside of me.”

Dupatta: Is the scarf that that is wrapped around the body of any Lehenga, Slawars etc. 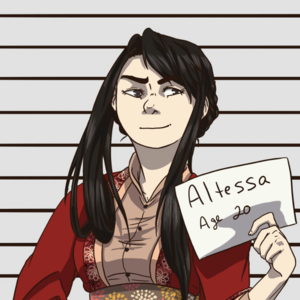 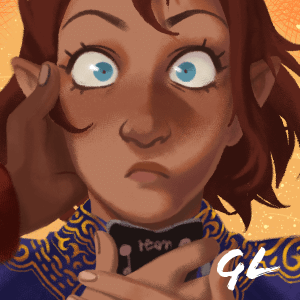