Shinohara was glad that Spring finally came. It was getting warmer. Since thirty years the Winter hasn't been so freezy as this year. In previous years, it was enough for Shino to drink hot tea and, wear three thick pajamas and jump into his bed. And this Winter? He also needed the warmth of the other living being, which was Yamiyoru. An angel towards whom Shino himself wasn't sure what he really felt.
But that was behind him. Now cherry blossom trees have started to bloom in the park. Beautiful, pale pink flowers fell to the ground. Almost like snow, but more delicate and not so cold.
"I feel like in a paradise" Shinohara said to himself, standing in front of one of the trees. A tall, spreading cherry tree which branches gently swayed in the breeze.
At one point, someone put his hands over Akumarou's eyes. Shino just laughed and grabbed that someone's hands.
"Yamiyo, don't play with me like this, you're not a child" he said, turning to the angel.
Yamiyoru also laughed.
"When you're broody, someone could even kidnap you and you wouldn't notice" said Yamiyoru, crossing his arms. "Sometimes you're as clumsy as me, Shinohara."
"Why do you still call me by my full name, Yamiyo?" asked Shino, looking in angel's eyes.
"Alright, alright, Shino" said Yamiyoru. "Or maybe I should call you "Aku"?"
"Don't call me that" growled Shinohara.
Yamiyoru just laughed.
"Don't laugh."
"Why?" angel teased him.
Shino sighed and pushed Yamiyoru to the grass. He leaned over him and smirked.
"Because I don't like this name. Technically it's my real name, but I don't consider it my name at all. And you know this" explained Shino.
Yamiyo suddenly stopped laughing. There was only the faint trace of a smile on his face.
"Shino, I don't like this situation and..." the angel cut his sentence, making a serious face. "Let me go."
Shino obeyed and helped the angel get up. Yamiyoru smiled a little weird and flew away. It was the first time Shino saw him fly.
"He's beautiful"
"He looks beautiful against the sun" Shino said to himself.
"Akumarou" he heard quiet voice of Hashidani. "What the hell are you doing?"
"Me?" Shino was confused.
He turned around.
"Don't scare me like this or I'll have a heart attack."
"Let's make a deal" said Hashidani, leaning on the tree. "You and me
"You and I will have a duel" Hashidani announced. "If you win, you can give me some punishment. But if I win, you and Yamiyoru will never meet again. Got it?"
"What's the matter, Hashidani?" Shinohara tried to understand the angel.
"I'm not going to let Yamiyoru fall" explained Hashidani. "See you in the park at 1pm in three days, Jigokuno."
And he walked away, leaving Shinohara confused like never before in his life.
* * *
It was evening. There were a few first stars on the sky.
Hashidani was sitting on the balcony and staring into the space. Izumida walked to him.
"What are you thinking about, Hashidani?" he asked.
"History repeats itself, Izumida" Hashidani replied, to which Izumida looked puzzled. "I won't let it end the same." 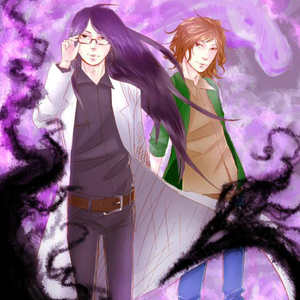