Last Chapter: Suddenly, a small applause of claps came from behind him; Sara and her four girl-friends she met at the nearby town. They were wearing that supposed scouting ‘outfit.’ Which only consisted of similarly styled clothing they could salvage from unused buildings. The point of the clothing was to hide themselves well within the forests of the south. decorated with two axes hoisted at their waists. "You're so amazing," Sara said ironically.

"If only your sarcasm were as good as your combat skills," Luis smirked. Sara's face turned beet red. Quickly, she turned around with her friends towards the woods so they could practice being unheard in the wilderness. The siblings eyed each other with a play-like intimidating stare, and both smirked.

‘Things won't ever be the same,’ Luis thought.

Atlanta now lay empty as the city was abandoned. The sun had disappeared behind the dark clouds and gave a dark and gloomy feel like the end of times. It rained heavily, the streets filled with bodies, trash, and roaming rabid animals. "Come on, Austin! Let's go! Let's go!" The man yelled. They had both been running for hours, dipping through alleys and running through destroyed buildings, their clothes had been tattered through the weather and the fights.

"I'm right behind you, but we got to go faster Adriel, they're right on our tail!" Austin yelled.

Behind them were one of the most dangerous gangs in Atlanta. "Come back here, man! We just wanna talk," One of the members laughed with his wrench in his hand.

"Yea, let's just talk!" Laughed another, running after them.

"Sick 'em!" Another gang member yelled, and in the distance was the sound of ravage dogs, two of them, in pursuit.

"I love you too!" Austin cried with him. This was it; this was their last moment together. They could hear the wet paws of the savage beasts coming towards them at an alarming rate, then all of sudden the whistle of two objects whizzed by their heads. Only to turn around and see that two bolts had hit the dogs directly in the chest, killing them instantly.

"What the f-" Adriel choked.

"Duck, dumbasses!" A voice cried out. Bolt after bolt sent launching towards their pursuers until it finally stopped.

The two friends nodded in unison. Their bodies soaked in sweat while in front of them were a team of crossbowmen.

"Who are ya, and why were ya being chased after these gang members?" The man asked in a thick Atlantan accent, his hand having the brand of a laurel leaf crown.

"I am Adriel, and this is Austin. We were being chased because... well, we don't know why but they weren't friendly... and where'd you get those weapons from?"

"Hmph... That’s none of your business! Now," He raised up his hand and simultaneously did the men raise their crossbows aiming directly at the two, "Submit or die."

"Y'all are missing out on the good parts like king crab legs!" Ariel chimed in.

The group groaned; it was moments like these where the group could calm down and relax, especially since winter weather has officially started to creep into town slowly.

"What I would do just to smell that!" Mikael moaned as he thought about it.

"Yea, it's been a long time since we've had any of those things, but let’s just hope that we're still alive, " Ariel sighed.

"Ain’t that the truth," Tonya agreed.

“Alright, enough fantasizing about food,” Ariel stood up, dusting herself off. “We have some things to check off the list. How’s the progress on the farm out there?”

“We’ve tilled most of the soil so far and planted what we could. It took us longer than expected because one, the land hasn’t been planted for ages, and two, we don’t have any type of machinery unless you count the horses,” Mikael said exhaustedly.

“Well, that’s good, at least. What about the news on the road?”

“Well, it seems like people are getting sick. Especially since people are hoarding what they have, and it’s starting to spread because people in mass are leaving the cities,” Tonya stated.

“What do you mean, leaving the cities?” Ariel asked.

"Remember Tonya, It's either them or us, and right now it has to be us," Mikael reminded.

“We’ll be lucky if none pass by here but, if they do we need to be prepared and protect the kids here,” Ariel stated. "Last but not least, we need to find a proper food source before things get worse, hunting for nearby animals with my bow isn’t cutting it," Ariel sighed.

“Carlos and I could go check out the river nearby and see if there’s any fish there?”

“Alright, you guys can go there, but be back in time for supper, we have more things to talk about,” Ariel worried.

“‘I’m gonna go find Lau, the rest of you do what you want,” Ariel said walking out of the house.

“Not you too!” Ariel groaned, closing the door behind her. A couple of things had changed in the last month, including them cleaning up the house and tilling the land. Since everything was almost done, the kids finally had time to relax and play like actual kids. Screams of laughter filled the front lawn as kids chased after one another in a friendly game of tag. On the side of the porch sat Lau.

“Hey Lau,” Ariel smiled. “Why aren’t you playing with them?”

“Why not?” Ariel furrowed her eyebrows in worry and came closer.

“I just don’t, okay!?” Lau hissed, walking at the edge of the porch.

“Girl…” Ariel paused and calmed her nerves, “Lau, talk to me.”

Lau turned around, her eyes watery and red, “I miss my family so much! I don’t know where they are, and what if I never see them again?”

Lau continued to sob, leaning on Ariel, “How would you know what it feels like to miss your family?”

“When I was around your age I lost my family too,” Ariel admitted.

“Don’t be; you weren’t there. I do know what you’re going through, and you have every right to be sad, and I won’t sugarcoat it. They may not be alive, but I need you to live for me, okay?”

Lau wiped her tears and shook her head, “I understand.”

“Good, now go play with your friends. I’m sure they miss you.”

Most of the autumn leaves lay dead and grey on the ground crisp as usual. The sun now reached its peak as Mikael and Carlos reached the bank of the calm river.

“Looks like we finally made it,” Mikael huffed, vapor leaving his mouth, “You ever think about how this winter is much colder than usual?”

“Yea, it’s been frigid. Maybe it’s just because we’re not heating it up as much with toxic gas emissions?”

“That could be it,” Mikael pondered.

“Or it’s because we don’t have a heater, and you’re aging,” Carlos half-joked.

“Haha, very funny,” Mikael grunted, “Let’s start walking down the bank and see if we can find any fishing equipment someone left behind.”

After an hour of walking, they were able to find a nearby shed that looked worn down. The door wreaked of mold and rotten wood.

“Well, today’s our lucky day,” Mikael smiled. In front of them lay a couple of fishing rods and what seemed to be compost of live worms.

“Wait, you have to fish with live worms?” Carlos asked disgustedly.

“You are a city boy, huh?” Mikael laughed, “Most of the time, people fish with live bait. Come on, let’s test the waters.”

Grabbing two fishing rods and a handful of bait, they made their way back to their clearing. After Mikael showed Carlos the basics of fishing, they had slowly started to collect fish. After a couple of hours, they were able to collect a good amount of fish enough to last them a couple of days. “Okay, are we done yet, Mikey?” Carlos groaned.

“One, don’t call me Mikey. Two, yes, we are. We can start heading back home now.”

“Why not, Mikey,” Carlos taunted and then paused, looking around, “What was that?”

“What was what?” Mikael looked around with him, “Stop fucking around, Carlos. You can’t scare me like that.”

“I’m being so serious, right now, Mikael.” Carlos looked around, drawing his makeshift spear, which was a very long shaved down tree branch sharpened at the tip.

“Shit,” Mikael cursed under his breath, grabbing his spear as well. Listening closer, he heard shuffling among the shrubbery. “Whoever’s there move away now or I’ll… I’ll stab you!”

After a few moments, the shuffling happened again and then popped up three adults. One looked like a musclehead, another seriously scrawny, and the last was a man who looked like he just came from an extensive bar fight.

“Woah there, y’all. We don’t want any trouble,” Mikael warned.

“We don’t either,” The musclehead said, staring at their pack filled with fish, his eyes darting back and forth, “Just give us your food, and we’ll be on our way.”

“Just give it to us! We haven’t eaten in days!” The scuffled man commanded.

“No, now back off, before either of you get hurt!” Carlos yelled. The scuffled man then burst into a sprint towards Carlos, his friends following suit. Carlos followed his training and set his spear in a defensive position and waited. Coming up closer, Carlos saw the glint of metal coming from the deranged man’s hand.

“Hey, over here, big guy!” Mikael yelled, breaking into a full sprint for the musclehead. Using most of his weight, he tried to plunge the spear into his enemy, but the musclehead moved out of the way and closed the gap between them. Mikael felt the force of a huge fist meet with his cheek as he was pummeled to the ground.

Carlos howled over when the knife deeply sliced his arm, but regained his balance and stabbed one of the men in the stomach, causing him to cough up blood and retch over. Yanking his spear back out of the man, he whacked the second man in the side, pushing him to the ground. The hard ground making a huge thud sound against his thick clothing.

Mikael was then pinned down and choked by the musclehead struggling to reach for the spear he dropped. Losing consciousness, he had a decision to make, live, or die. He remembered that he stored a knife in his boot if he was just able to reach… Got it, Mikael thought. He pulled his knife from his boot, gripped it tightly, and shoved it in his head, causing the man to go limp onto the ground. Mikael got up, heaving and Carlos out of breath from that life-changing event. 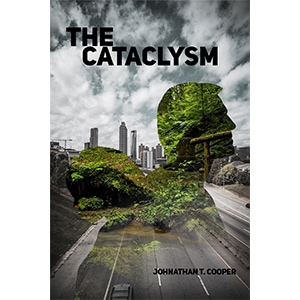