Yohan trudged his way towards Andrew, lightly taking the band-aid from his hands. Startled, Andrew stared at Yohan as the novelist helped him put It on. Conscious of their close proximity, Andrew shyly peeked at Yohan’s face, his heart skipping a beat. The author hadn’t changed one bit— he was still nice and caring, albeit a bit grumpy and reclusive than before.

Andrew couldn’t resist the corners of his mouth turning up into a soft smile. He felt warm and giddy— his old memories washing over him as he quickly casted his eyes away from Yohan’s.

“… Did we ever meet each other before?”

Andrew froze, his shy smile slowly fading as his hand slightly trembled in Yohan’s. Did… he recognize him? Keeping calm, Andrew hesitantly gazed into Yohan’s eyes, as the novelist looked at him with his face scrunched up in uncertainty. Whew… I thought he remembered me…! I can’t have him recognize me so soon!

“Oh… I just felt like I’ve done this before… Never mind. Sorry again for running into you, earlier…”

The two men awkwardly stood in front of each other, not knowing what else to do. Yohan scratched the back of his head as Andrew cleared his throat nervously, looking away. His hand still tingled from Yohan’s touch. What was he going to do?! He liked him too much… this was insane!

Yohan glanced at the man in front of him. How in the world did he run into him? Noticing Yohan’s scowl, Andrew fretted, worried that he might have offended Yohan with his comment from earlier.

“Why do you keep calling me Mr. Yoo? Just call me Yohan.”

“Huh? But… You’re the author I’m in charge of; how can I just call you by your name?”

“Well, there you go. I’m 29 too. Just call me comfortably, no need for formalities.”

“So, what were you… Uh… I mean…” Yohan trailed off, not knowing what to say.

“… Do you have a ride back home?” Andrew asked, breaking the silence.

“Would you like me to give you a ride?”

“That’d be great but… Don’t you have something to…?”

“Oh, it’s fine… I just came to sightsee since it’s been a while I’ve last visited.”

“Then, let’s go.” Yohan replied, marching down the road towards the pier nearby.

Andrew stared after him. Did Yohan Yoo just say that he wants to walk around the pier with him?! His heart fluttered, nervous and excited to be spending time with his crush. A happy, sunny smile splayed across his lips, as he trailed after the embarrassed author.

“Are you sure you want to stay here? If you’re busy with the draft—”

“Oh, I already finished it. I’ll email it later when I get back home.”

The pair fell silent once again. Andrew peeked over at Yohan, noticing the first-aid kit, he paused.

“Should… we put that in my car? It’s parked over there.” He pointed to a white SUV nearby. Yohan raised an eyebrow. Why had he been at the foot of the hill earlier when his car was parked over here?

Meeting Yohan’s baffled gaze, Andrew chuckled, “I was planning on going up that hill to take a picture of the beach… Here, I’ll put it in the trunk.”

Yohan muttered his thanks, watching Andrew gently place it in the back of his car.

Resuming their short walk to the pier, Andrew cleared his throat, unsure of what to talk about, “So… Who was that man earlier…?”

“Oh. Eddie’s a friend of mine since childhood. We went to the same church and school.”

“Ah… I see. It must be nice to hang out with a childhood friend. I haven’t seen mine… Well, since high school.”

“Nah, he’s annoying… But… why haven’t you seen your childhood friend? Is it because of work?” Yohan glanced over at Andrew who grimaced at the question.

“… Not exactly… We dated but then broke up in high school, so it’s been a bit awkward since.”

The two fell quiet as Yohan chastised himself. What was he doing, acting chummy with his new editor?! Groaning, Yohan clamped his mouth shut. If he couldn’t act unbearably towards the new editor, it would do him good to ignore Andrew’s attempts to start a conversation! Though… Yohan did still owe the guy for running into him earlier… Dammit, I’ll just be nice to him just for today! He’ll be running away soon enough!

The pair eventually made it to the pier, taking in the breathtaking view of the many shops and restaurants that were lined up along the wooden bridge. Yohan breathed in the salty air; it had been a long time since he had visited the iconic pier. He smiled, nostalgia washing over him as he gazed down at the ocean.

Realizing that his editor wasn’t next to him, Yohan scanned the area, until he found the modelesque man looking at some handmade items from a vendor. Yohan frowned. That feeling of déjà vu was still fresh in the writer’s mind as he turned back to admire the sea.

He knew he had experienced something similar before… but where? Frustrated, Yohan sighed, sneaking another peek at Andrew’s handsome face. He was good-looking— enough to possibly be a celebrity… Yohan placed a hand on his chin, continuing to stare at the unsuspecting man. …He’d be the perfect model for the second lead in my book… Or first lead…? Hmm.

Feeling Yohan’s gaze on him, Andrew looked up, only to see Yohan’s eyes flitting elsewhere. Was he waiting for him? Quickly heading over to Yohan, Andrew was about to reach him when Yohan ran towards him. Confused, Andrew stared at him. Yohan pulled Andrew towards him, while a small child on a scooter narrowly avoided running into the handsome editor. Andrew’s breath hitched while he stared down at Yohan who was still holding his hand. Andrew could smell Yohan’s citrusy aftershave, as Yohan let him go and squatted down next to the scared child.

“Hey, kiddo, be careful, all right? It’s dangerous to go around without your mom—”

“Michael! What are you two doing with my child?!”

“Er, sorry, your child was about to run into—”

“Ugh, stupid fucking Asian homos… Get away from my child you dirty freak!” the woman shrieked, yanking her child away by the arm.

“I—Excuse me, but I haven’t done anything to your child.” Yohan said coldly, standing up from the ground.

“Did I ask for your opinion? God, these Ch*nks are everywhere these days!” she huffed, glaring at the writer with such disgust and disdain.

Yohan scoffed in disbelief before he looked down at her child and smiled sweetly at him as Andrew frowned in anger. Who the hell did she think she was to call Yohan a disgusting freak?!

Crouching down again next to the child, Yohan smiled as the woman brought her child closer to her. “Hey, kiddo, tell your mom later what really happened, all right? Being a Karen isn’t all too attractive.”

The woman gasped as she shoved Yohan away from her child, causing him to crash onto the wooden floor while she quickly ran off with her child in tow. Andrew stared after her, shocked, as did other passersby, who asked the two men if they were okay. Yohan didn’t respond, brushing off some of the dirt on his pants as Andrew thanked and reassured them that they were fine. Hesitantly, Andrew glimpsed down at Yohan, tapping on the author’s shoulders. Yohan flinched, looking up at Andrew.

The ride home was tense as Yohan mulled over the woman’s words. How was he mistaken to be a gay man?! He didn’t even care that he was called a ch*nk—it wasn’t the first time he had heard someone call him in such a derogatory manner—but him, being accused as a gay man? Now that was a first.

He glanced at Andrew who was staring straight at the street, seemingly unshaken. Was he…? Nah… he couldn’t be… right? Yohan sighed as he looked out the window in silence. Did it matter if Andrew was gay, bi, or straight? He was stuck with this editor for a whole year!

I’m going to make your life a living hell, starting now… So, you better run while you can.

A mini date on the pier~? :D Also, I apologize if anyone was offended by that 'Karen' .-. You'd think it won't happen in a liberal state like California, but it happens... T^T

See you guys in the next chapter~ <3 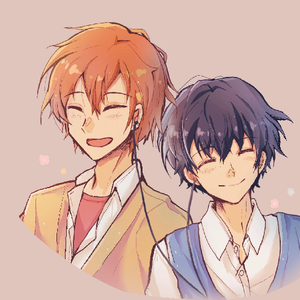 Did Yohan just check out Andrew?! 💕 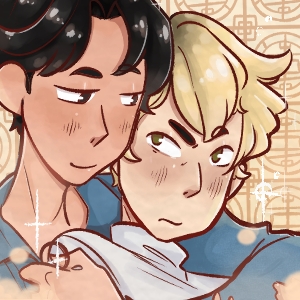