Kai’s group journey has started. As it was said before, the expedition team is not really numerous. At the rear of it the two younger guards were enjoying their first trip outside Asmund. Like the sun was shining, the untamed golden hair boy was smiling from cheek to cheek. His outfit is as simple as it gets: a pair of simple black pants and a red shirt with a simple design. He also has a black hood coat surrounding his waist and some pouches around his waist. At his right leg is attached a small pocket bag, ideal for concealing small items, and his right arm has some kind of black leather bands that covers from his right forearm to the pulse. He seemed to be enjoying his trip, not worrying about their situation. At his side was his brother. The bookworm boy, as Turk called, was reading an old notebook, which seemed written by hand. The boy used a black high neck gaiter hood just like his hair, with some orange lines designs on it, which could not hide his feeble physical. He travels with a custom-made black and white sling bag on his back and has a pair of gloves following the same design as his outfit. As he turns other page of the notebook, he starts coughing.

-Jax, are you okay? - asks the golden hair boy worried, while holding on his right hand a shining blue rune.

-I’m fine, don’t worry about it. You have to keep low profile Leo; how do you explain to have this type of item in your possession. – says Jax while making Leo hide his item.

-I don’t really care about that, but your symptoms seem to be getting worse. Just like the old man said, he only did a patch-up to your body.

-I know Leo, but I’m fine really. I just can’t use my power so often. I have to put my training on standby until we get this. – Jax points to a draw on his notebook, revealing a rune – Darkmore wrote that this is an Essentia Adamant sealer. With this I can seal up any Essentia bursts for the time being, until we reach Azure Continent.

-And you really believe that this Kai guy can help us get something like that?

-Yes, I heard rumors about him and in this moment, he’s our best shot to get one now. It’s a really rare item, but because it seals back Essentia no one wants something to stop his own Essentia flow. Usually this type of item makes part of high-grade range weaponry, to strike down heavy Essentia users, and that is why it’s considered as forbidden to anyone that doesn’t belong to the Nation ranks. But we have to be patient, if we reveal ourselves as Essentia users, the merchant could very well scam us, or even sell us out to the Nation. I think this can get dangerous. Specially you Leo, you are wanted man after all.

-Well, you know I got your back. So, take it easy until we get this done, don’t worry about me. – says Leo smiling.

-Guys, let’s call the day here. By this time tomorrow we will have reached path’s halfway to Swallow’s Nest. – announces Kai, while getting the camp up.

-Nice, time to eat! – an enthusiastic Leo is salivating – what’s the dinner?

The drive Chu gives to each of the escorts a little box, containing a little potato curry portion. Leo seemed sore.

-Really?? Where is the meat?

-Kid, this is not a leisure trip and mister Kai spend and bet everything on his stock and hiring you guys. Stop whining about it and be grateful for your meal. - lectures Turk, while taking a bite to the curry. His expression was nauseated. He then stands up and goes to Kai and mutters – Kai, you expect me to eat this every day? The boy is right, where is the meat?

-You glutton! Did you hear yourself preaching the kid? I bet everything on this, I couldn’t spend more on food. Be grateful for what you have.

Kai and Turk start arguing, while the others were grinning and eating the curry.

-Jax, do we really have to eat this every day? I need meat!

-Leo, endure it. After we reach Swallow’s Nest, we can eat something good.

-But did you eat this? This is so bad. – complaints Leo, as he drops curry from his spoon to see its viscosity. – Better than nothing, I guess.

Kai’s travel crew soon falls asleep after having dinner. As they rest, something is lurking in the night shadows. It’s a thief’s guild, the Angry Boar. This is a group formed by Nation’s outcasts, that heists merchants from big cities. They make use of this season to gather materials for waging war against the Nation, or they seem to say so. Headed by Peter Grimm, known for riding on a wild boar, this group aims to rob and ravaging travelers’ camps. This night they would attack Kai’s group, at the nightfall.

They never stood a chance. The sleepy Chu and Yu were trampled by some of the Angry Boar’s goons and rendered unconscious. Kai tried to yell, but it was gagged before he could warn anyone of the attack; Turk was immediately surrounded, and all tied up with chains.

-You think these puny chains can hold me back? Think again – says Turk while struggling to get out in vain – What? No, it can’t be … you have Essentia Chains.

-Say nighty night, monkey – says one of the thieves, as he strikes his head with a mace, leaving Turk bleeding and unconscious.

The only people left were the four new hired guards. Buck was too scared to move and was easily subdued; Keith tried to fight back, only to be knocked down easily. Jax and Leo fight it off 2 guys each themselves, but they were getting surrounded.

-Seems like we have some feisty boys right here, huh? – says Grimm, as he approaches them grinning- Can you surrender now please? We have more appointments to attend to.

-I knew this was being too easy Jax. What do we do now? Should we flee?

-I don’t know if we can conceal ourselves anymore, but we have two choices: we get out of here by ourselves without what we came for, or we have to take care of it and hope Kai doesn’t make it harder for us after we handle this.

-Hmmm, I don’t know Jax – says Leo crossing his arms, trying to think. Then he whispers to Jax’s ear– I think our priority is to get that rune you need, right?  I’ll talk to him first then.

Two thugs of the assault crew approached Leo and Jax.

-You little brats, are you so scared of us that you would freeze up? – asks one of them while licking his knife menacingly.

-Be right back fellas, don’t do anything before I got back ok? – says Leo as he jumps over all Angry Boar’s crew easily, a distance easily larger than 20 meters. Everyone was in shock.

Leo got closer to Kai, who was lay down on the ground gagged, but just as astonished as the others. Right by his side were 2 Angry Boar members, that were stunned by how quickly Leo get there and didn’t even try to prevent Leo from ungagging the merchant. 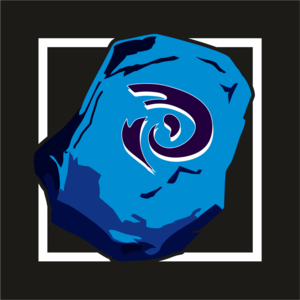