Cats don't like water. I remembered it the harsh way.

I tried to leave the cat (now Lieutenant Fluffypaws, don't ask) by the shore, but it kept climbing to my neck. I decided to just undress and enter the river. Would I drawn?  Was one of the thoughts on my head. I first removed the sword from my chest, then took off my chestplate and last, but not least, the remains of my skirt.

I, indeed, was a skeleton and nothing else.

But I... could move? and think...! Not all skeletons are able to do that though.

Perhaps I wasn't just a skeleton.

My bones weren't the nuclear white I had expected them to be, either. They were slightly yellow and covered in a layer of moss and fungi. Lieutenant, still on my shoulders, hissed as my knees submerged in the water. It didn't like water, apparently. I then remembered cats didn't like water. I tried to get it out, but I tripped and both fell in the river. Presumably scared, it bit my skull and scratched it.

I was surprised it hurt.

It ran away and started licking itself, to my surprise. I thought it would run away from me. Only then, when Lieutenant wasn't on my shoulders, I started cleaning myself. I hated all that filth on me and on my clothes. I saw myself in the river. The water was clear as it had never been before and my now clean skull appeared in the water as a ghost, floating.

I was now, indeed, completely sure: I wasn't dreaming.

I got out of the river, my bones almost shining after the cleaning , and washed my clothes.

They were horribly filthy. Once I had judged them dry enough, I put them on and stabbed the sword through my chest again. Weird, I know. But it kept my chestplate in place and was a way to honor the person who once fatally wounded me, in my opinion. I do not remember his face, or if he shed a tear or not. But it's not like I cared, I was alive again.

Clean and fully dressed,I carefully grabbed Lieutenant and placed her on my shoulders and started walking. I wasn't thinking on where to go, and Lieutenant wasn't picky about that. I chose a path that once headed towards the capital city of Aetria, the biggest empire back when my flesh was still wrapped around my bones.

I remembered a few things from that city; the music, the children playing in the streets, the smell of tenderized meat coming out of the inns... but not the name.

Wait.-I even stopped walking for a second- I can't remember any names.

I would have cried if I still had organs for that. Faces came to my mind, voices, feelings... but not names. Not even the name of my parents, whom I don't remember either.

Every name from my mind was gone, erased, perhaps, by the force that woke me up.

Why would someone wake me up from the dead, of all the dead people around, with only half-baked memories and nothing else?

I came to a relisation. If so many years as it looked had passed since my death, then everyone I remember...

It's weird to express feelings being only a bunch of bones, you know? You can't say something gave you a stomach ache, or that you have a lump in the throat, for you have no stomach and no throat. Sentences of that kind become obsolete, useless.

Did I get to say goodbye to everyone I remember? To all those nameless faces?

My chest felt like it was full of anvils. At least I was clean. Perhaps bathing in the river had helped me a bit. I even found a suitable hand for myself, having both hands never felt better.

I should have let go of who I was before in the river, but I shouldn't taint those waters with my grief to untaint myself, my soul.

Did I still have one?

The lieutenant being a cat just roughly killed me. But also, yeah, I feel that it is suitable since he just got revived from death and quite a few things have changed for him. 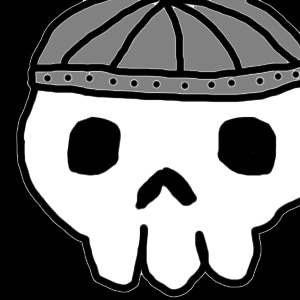