After almost a month always traveling, the brothers and Kai finally arrive to Serpens City. Since their more earnest talk, Kai felt more reassured of his trip companions and trust his life to them. Sure, they still have their secrets they didn’t share, yet he was the same. However when their campaign was attacked by several thugs’ groups along the way, Jax and Leo defend them as a true family.

Due to the thieves’ assaults and the journey duration, even their ride, the axel rhino, shows a tarnished state; its palanquin is all teared up, full of cuts and without one of its corners, and his own natural body armor is full of scratches. Jax and Kai’s clothes are somewhat dirty, but without holes, in contrast with Leo’s, proof of more than a few skirmishes along the way. The arrive of their party to the city meant a hot shower and a decent meal in a long time.

-Welcome to Serpens City, my friends!

Just as Jax’s party set foot on Serpens City town, a stranger approach them with a big smile. He instantly opens up his coat, exhibiting different knifes and blades.

-These blades are the best ones you can find in the entire Crimson Continent. And just for you I can get you a discount for travels: you can get your choice for only 5 gold coins. A-

Before the salesman could finish his sentence, Kai pretends he didn’t see him and past right beside him, the brothers followed his example. Just as they think they are clear of him; numerous shameless salesmen pop up in front of them, some even trying to rob their bags and their rhino mount.

-This rock has the power—

-My family is so poor, and this rhino can solve all of my financial problems….

-What about trading this dagger kit for that rhino. This kit is priceless you know.

-What about sleep in a five –

Kai, without any warning, pulls the axel rhino reins and it stomps the ground. The floor shakes a bit, throwing out off guard the peddlers, which the travelers use it as an opportunity to escape their harassment, remounting the rhino and runaway.

-Damn, they sure are eager to sell.

-This is Serpens City, kid. You are walking wallets for the locals.

The little demon appears once again, this time with a hood dark brown coat, looking somewhat down, surrounded by darkness.

-Hello everyone. Looks like it’s time for another appearance huh? …What? Why am I so down? Well…

The demon suddenly puts his hood down, revealing his incomparable devilish smile, and opening up his coat, he shows up numerous daggers and pamphlets.

-I can’t believe you don’t want to get in these great deals. Look at the quality of this blade, it’s a masterpiece. Or this dagger, is there anything that grants you more stealth than that? Or this one, or even this…huh? You are not interested in any of this? Tough costumers… What about some info? This is on the house this time I guess, but next one you buy it I need to make a living you know!

The demon opens up one of the brochures, with the title “Serpens City: I just accept gold”.

-Oh, the Serpens City … such a nice city…like 200 years ago. It was known as a paradise city until a massive battle between two formidable rivals changed the landscape of the territory, obliterating its sea connection and leaving the rivers dry up. As the time passed, each year there were less and less local resources, resulting on the population exodus. However, as the Nation extended its frontiers, it engulfed the city, and it was decided to restore it as a travel point a decade ago. Even though that its area has no natural resources, it’s a strategical stronghold, and travel across Crimson countries you are fated to pass through it.

This made numerous people to migrate there once again, including multiple salesmen to explore sales to travelers. Even though you get access to almost anything by order it, due to the lack of self sufficient supplies, the city was renamed Serpens City, signaling the town emptiness when compared to the past.

With the repopulation of it, the rebels infiltrate easily on Serpens City. The habitants of the town know that exist members among them, however they help their community in secrecy as a way to not expose their members. The Nation from time to time tries to find them, but with no results. The rebels gain the towners favor and continue to make precise strikes to a helpless Nation.

As the demon finishes his brief explanation, he smells something. His eyes begin to shine, and his pupils turn into gold bags.

-Seems like there is some stuffed wallets waiting for me, unlike you bums who just wasting my time! - yells the demon, before turning his back and comically run in the opposite direction -Sir, can I have a moment? Did you know that a brand new knife series is something that could change your life? As a matter of fact, I have here with me that same kit…

Kai finally throws the salesmen off their back, hiding in an alley. He sighs in relief as he sees no sign of their pursuers. From his sling bag, Jax gets a wide blanket, in order to cover up the axel rhino’s body.

-Phew, they are persistent. We have to return this rhino to the rent shop, but it is difficult to be discrete with it. So Leo, I want you to be here with it, while me and Jax try to find out where is the shop stables, and find some place to rest.

-Why does it have to be me?

-Leo, you are joking right?

-The rhino is too big to be able to hide out, but you always get into trouble no matter what, usually because you talk with no filter!

-No buts, Kai is right, just be here for a while. We will try to resolve this as fast as possible. 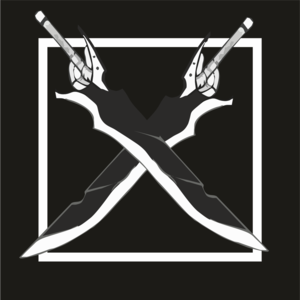