I advance past the crowd of people to eventually make my way into the middle, where all the action is happening. As soon as I arrive in the circle, another one of Ryan’s friends, Sera, gets immediately domed onto the car, not even five seconds in… this is brutal.

“HAHAHA! THE PRODIGAL BLADES ARE UNDEFEATED! NO SOUL IN THIS CITY CAN MATCH OUR MIGHT!” The guy currently in the middle boasts.

“Aw… shit…!” Sera grunts, dropping the sword he was given beforehand.

The guy Sera was dueling earlier wears a shit-eating grin on his face as well as a buzz cut on his head. The blade he is using is made with real steel, fondly enough… I guess since the sword can actually kill someone, Ryan’s gang are taking this very cautiously, though that isn’t going too well I can see and I’m going to be the one who’s going to break this cycle of torment for them… Oh well, I’m gonna try to have fun with this one.

I walk out amongst the crowd and kneel down towards Sera, still groaning in defeat. Without saying a word I reach for the sword next to him and take grasp of it.

“J…- Joseph! Don’t face him! Your hubris will suffer just as much as mine!” Sera exclaims.

I sigh, “There you go talking about your hubris again… Let me handle this one, Sera. I’ve been having a bad day.”

Sword in my right hand and my left hand clenched, I stand opposite to Little Miss Hotshot over here to accept his challenge. As he turns his head toward me, he proceeds to give me a face of disgust.

“Hah?! A kid?! You gotta be kidding me?! Are you guys seriously putting this kid on the line?! BAHAHAHA! You guys make great comedians!” He insults me.

“Nah, I was just passing through and thought that I might as well take a shot at you.” I say.

“Hoh? Well lucky for you! ‘Cause you’re facing the Prodigal Blade’s number one! What makes you think I’ll go easy on you since you’re younger than the rest?”

“The Prodigal Blades? Going Easy? What’s so ‘Prodigal’ about you and your team? You guys look more like a cult to me with your matching jackets and hairstyles.” I snarkily quip.

“How about this? If I; a kid, manage to beat, knock and ridicule you amongst all these people while on camera, you promise me to disband your little fanclub of sorts as well as drop swordfighting altogether, deal?” I propose.

“You’re doing this so that I don’t have an excuse to not go easy on you, huh?” The hotshot says.

“Of course, it would look cheap if you didn’t go all out, and besides, I wanna see the champion you really are.”

“Ha-HAHAHA! PESKY CHILD! I EAT LITTLE SHITS LIKE YOU FOR BREAKFAST!” He squeals.

“Oh yeah? Well then, I hope you choke on my bones.” I say smugly.

Whilst Hotshot and I transition into our battle stances, Sera who has finally gotten back up, climbs on top of the Broken SUV and begins to record on his phone. Meanwhile, Ryan is over at the back still trying to take in what I just said, he’s probably thinking about how this wasn’t a part of the favour. It doesn’t matter, if I can get rid of these lowlifes then they won’t be bothering anyone anymore.

I slowly shift my legs apart and bend my back leg, my blade at the ready in my hand as I twirl it to get a feel for it. I inhale deeply and sharply as I steady myself, my eyes narrow with conviction and determination. The final touch being my smirk, to tick him off of course. Although, it seems I’ve already pissed him off to the brink so whatever I’m doing now is just icing on the cake.

Hotshot’s eyes are twitching, his fist is clenched tight to the point where he might accidentally break his hilt. His teeth are gritted and almost rattling with ferociousness, eager to take a swing at me.

Little time passes and Hotshot has yet to make a move on me. Still leaving my guard up, I turn around to check if Sera is recording. As I do so, Hotshot sees his opportunity and does not plan to miss it. Whilst I am ‘distracted’ Hotshot attempts to take a cheap shot at me. I hear his footstep hit the snow and immediately react, I parry his attempted overhead swing and violently throw him to the ground. The crowd around us woahs in awe as my opponent hits the concrete.

From the look on Hotshot's face, he couldn’t believe what I just pulled on him, and not even two swings into the fight either… What a champion...

These updates are getting shorter and shorter.
I hope I can make the next one longer at least.

Next update's the first fight scene of the series so it should be pretty hefty.

Other than that, have a good day/night readers! 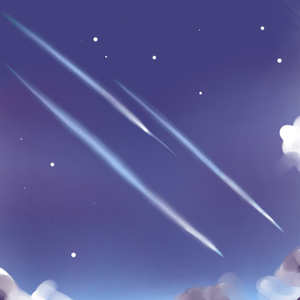