Although the ceremony hadn’t been completely initialised, Ira felt the connection between Mireska and himself being severed as if by an unknown force and he was pushed away. “Move! Tainted one,” a young man next to him suddenly hissed. He could barely be two moons older than him. It was Kyle, Roderick’s son. Those that had previously hindered Ira’s view, jumped back and formed a passage way for him. His reputation preceded him. On the surface, he looked like a thug: The tattoos on his arms, entwined in a dance with scars from brawls and fights with wild animals, as well as Ira’s now dropped gaze, confirmed the image. In addition, he sported the virtues of the hunter and a drunk. The passageway closed behind Kyle as he stepped into the centre of the village square and pointed at the Old Hag with a jerk.

“Grandma, what’s up? Are you done with the babbling soon? I want to put this shit beh...”

The movement of a hand. It was one movement from the Old Hag’s hand, which first brought Kyle to his knees, stole his breath and ultimately pushed him to the ground. Apparently, the Old Hag hid more secrets behind her grin than previously assumed. The grin grew wider and she raised her voice, full of mockery: “Patience, my child. It is your third attempt, no?” She looked towards the older villagers. “Do your parents really believe that you can become a decent village person and you can pass the ritual? Hehehe.”

Kyle’s gaze darkened with every “He” that escaped the hag’s mouth. But what was he supposed to do? The magic pressed him so firmly to the ground, he could barely breathe. The disgrace he felt was high. Ira seemed visibly upset by the scene, but not out of compassion for Kyle. He carefully leaned towards Mireska, not taking his eyes off the Old Hag, and whispered: “Don’t you think, it’s scary what a witch can do with one movement of her arm? Magic is terrifying, right Mireska?” “I think, the Old Hag herself is much, much scar...” Mireska wanted to answer in a hushed tone, but she was interrupted by the Old Hag’s voice. “Let us begin with the only girl, who has proven worthy of the trial this year.” She hesitated, smiled and continued: “Yes, I am talking about you, Mireska, you little dove. Hehehe. Step closer, my child.” 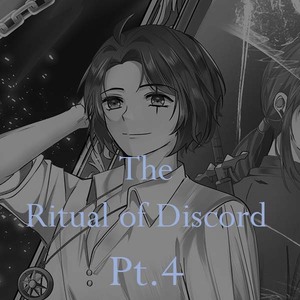