No reaction. Although Mireska had heard every word, she did not move an inch. She was frozen in shock, before Ira freed her from it with a nudge of his elbow. “Hey! Move. She called you.”

“Uh, yeah,” Mireska stammered and mumbled her protest to herself. With every step, Mireska came closer to the centre of the ritual place. The floor was made from a single, huge stone plate, decorated with runes and several notches, which had been carved in circular segments. Where the circles touched, stood crescent-shaped insignias, while the triangles were in places where the circles crossed. While it wasn’t visible to the eyes of humans, those with a connection to magic could see it. Every furrow, every notch was fed by the endless mana current, which encompassed our world. Given the current intensity and density, the ritual place had to be right above a vein of the mana current. If the humans weren’t so inattentive and dull, they would stand here in awe.

Mireska knelt on the floor and looked at the Old Hag, who came towards her bent forward. She felt goosebumps grow on her skin with every step the Old Hag took. She seemed more threatening than usual. The mana that encompassed her, cut of her air. She gasped.

Ira watched the event. He was concerned. He had never seen Mireska like this and although he knew, it was a normal reaction during the ritual, he wanted to run to her, help her. But what could he do? The villagers were only waiting for a reason to banish him. He clenched his fists and only one question went through his mind:

How long does it take?

The gasping stopped and tore Ira from his thoughts. The Old Hag now stood directly in front of Mireska and pressed two fingers onto her forehead. The torches around the square burned brighter for a moment and the sky was clouded in a deep blue shadow. The Old Hag began to recite something. Ira tried to make out what she was saying and pushed forward through the crowd. But it was hopeless. With every step he took towards Mireska, he seemed to walk further away from her at the same time. What was happening? Was he the only one wondering about what the Old Hag was saying?

The lips of the Old Hag closed and, at the same time, Mireska collapsed and fell to the side. The ritual had begun. 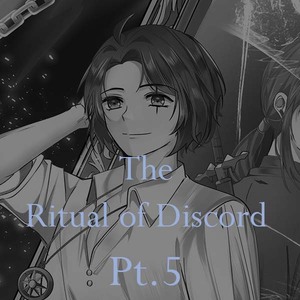