Ira’s breathing got heavier by the minute. It felt like an eternity to him.

This could only feel like an eternity to those, who do not lead their existence in eternity.

After a few more moments, four to be exact, Mireska’s body slowly began to move. A kind of smoke went up from her body. White smoke. Some of the villagers sighed with relief. Because white smoke was the sign that the soul was ready to face the responsibilities of adulthood. And she would forever keep the village’s will. Ira’s gaze appeared a little bit relieved, but worry still lay heavily on him. He had noticed that Mireska had hastily avoided his gaze when he smiled at her, worry draining from his face. He asked himself whether she would now hate him, too. What was hidden in her gaze? What had happened?

Without turning around, Mireska walked towards the adults behind the Old Hag. She was now accepted and would receive her profession over the next few weeks, and maybe even a partner. Ira’s gaze went to Kyle, who was still lying on the ground and couldn’t move. Would Kyle... No, Ira immediately discarded that thought. Only the accompanying feeling stayed, making his chest ache.

To Ira it was something of a blessing when the procedure of the ritual continued and he could distract himself.

The Old Hag congratulated Mireska. “Well done, my child. Or should I rather say young woman?” she asked rethorically, accompanied by a coughing laugh. She turned to Kyle. “Now to you - Kyle. Given the thirst for action in your eyes, ... You seem to not want to be held back any longer. Careful that doesn’t turn into your undoing.” Again, the Old Hag burst into strange laughter. It made some of the villagers uneasy. But they depended on the Old Hag and her ritual. Contrite and with his face turned towards the ground, Kyle set his anger free. “Shut up, grandma, the ritual is...” Again, Kyle’s words were choked off and enormous pressure went around the ritual square, which only pressed him closer to the ground. Even those villagers closest to Kyle bent a little bit at the knees. The Old Hag straightened up, smiled in a way that would give children nightmares even today.

I too have seen this and that and written it down, but that face will probably haunt me for centuries ... 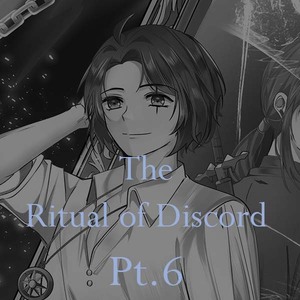