“If you make it!” she remarked and got more venomous. “You can howl as loudly as mountain wolf. In the end, your eyes tell me that you’re rolling around in your own dirt like a piglet.” Her gaze grew darker and more serious. “Now stop with the tantrum and sit down!” The hand, which had just rested against her forehead, slowly glided over her eye and moved toward the hem of her dark blue, festive coat. Every inch pulled Kyle closer and closer to the centre of the circle.

Bristling and grinding his teeth, he didn’t let this go uncommented. After all, his pride was important to him. “Me and afraid. I’ll show you, grandma!”

She didn’t react, but immediately began reciting the incantation. She didn’t adhere to the same formalities as she had done with Mireska. The blue-black flames around the village square burned brighter and reached never before seen heights. She grinned, closed her mouth and put her hand on Kyle’s chest. As if beaten by an invisible force, Kyle was thrown to the other end of the ritual place. An excruciating scream accompanied the events, followed by silence. The silence, however, was short lived, because Roderick, Kyle’s father, pushed forward through the crowd. “What are you doing?! Don’t you want to send my son into the ritual on the same terms as the others?! You barbaric witch!"

It is only with a sigh to possibly write down these lines. As it is said, the apple never falls far from the tree. But this apple has already rolled back under its roots.

The Old Hag turned her gaze to the right, slightly confused, and raised an eyebrow, followed by a short “Hm?”. That was enough to silence the man.

“Do you have something to say, Roderick?” she asked with an indifference, which only she could allow herself. “You know, the ritual can only be worked three times. During the last time, only the purity of the heart is tested.” Her gaze grew darker and her smile began to show again. “If he does not have that, you know the fate that awaits him.”

Roderick looked to the side and clenched his teeth. What should he say?

Other than with Mireska, it didn’t take long for the smoke to leave Kyle’s body. But it wasn’t white. Everyone looked at each other irritatedly; even Ira couldn’t not comment:

“Pink? Why is the smoke pink?” 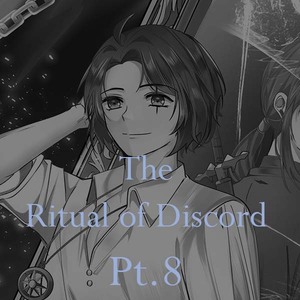