The confusion of everyone present was understandable. After all, they had never seen the smoke take on the above mentioned colour. White stood for life, black for death and blue for not passing the test. A murmur went over the square.

“Oh, interesting,” said the Old Hag with honest interest. “That I did not expect. Eden must have gone soft. Quickly, get Mariel. We don’t have a lot of time. The smoke is already turning black.”

Roderick didn’t wait another second and turned towards the crowd, called to his wife Mariel. His gaze went over the crowd. That wasn’t very surprising, because he always sent her far away from him, never liked to have her close. Slowly, he saw a little passage be formed and a shy woman hesitantly move forward. “How can she waste any time?” he murmured and grew angry, stomped towards her. Crouching, Mariel only noticed her husband when his body shielded her from the light of the torches and threw his own shadow onto her. She looked up. Her eyes were similar to those of a rabbit, finding itself across from a fox. Their gazes didn’t meet. She didn’t want to see her husband’s face. She knew exactly with how much disdain he would look at her. Suddenly, she felt pain jab into her side. Roderick pulled on her arm, dragged her forward and pushed her towards the hag. A “Make yourself useful” accompanied Mariel’s faltering steps.

Now she saw him. The body of her son. Her beloved son Kyle, from whose body darkening smoke drifted up. She looked over her shoulder, didn’t know what to do. Should she simply come here to watch her son die? What did they want from her?

Suddenly, she felt the pain again. But this time, in the front and worse than before. What could that be? That was simply the body of her son, wasn’t it?

No. Something was between him and Mariel. A shadow. The shadow, which the smoke threw onto the ground, had created a connection between Mariel and Kyle. The wisps of smoke began to fade, but not the shadow.

The pains grew, were hardly bearable anymore. Mariel slumped to the ground, at the same time, the shadow severed the connection and retreated.

“Ugh. What was that?” “Seikatsu,” whispered the Old Hag and moved closer to the woman writhing in pain. She began to explain but stopped whispering and laughed between sentences. “Congratulations, Mariel. I thought, Kyle’s soul had reached its earthly end. However,” she stopped for a moment, “the ghosts of nature had another opinion. As I said ...” The Old Hag was now so close to Mariel that not even a mouse could have jumped between their faces. She reached for Mariel’s cheeks with both hands and squeezed her face a little bit, like a grandmother. The hag’s smile looked like a crescent moon. “Congratulations on your pregnancy, Mariel.” She straightened up with malicious laughter, turned her back on Mariel and returned to her place. 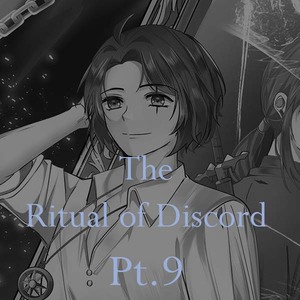