Roderick stepped forward from the rows of the other villagers and became a part of this, to him, unreal scenario. He silently put his arms under his son’s lifeless body and lifted him. Ira, too, watched the events and threw a compassionate glance to Roderick, despite his past with Kyle. Roderick got angry - no, boiled with anger, over him not being able to act like an adult. He closed the distance to Ira.
“What are you looking at, tainted one?! Acting like you’re pitying us, huh?” He threw his son’s body over his shoulder and widened his stance. “Isn’t that what you wanted, huh?” “Roderick, please,” Mariel’s voice weakly sounded from the background. She tried to calm him down. But in vain. Instead of calm, the sound of Roderick’s flat hand striking Mariel’s young-looking face without a second of hesitation rang out. “Shut up! Don’t embarrass me!” Mariel looked to the side and slowly walked away from the ritual square. “Well, tell me! That is what you wanted, right? No, you probably even wanted his soul to die completely! You cursed soul. Foul piece of dirt! That should have been your fate! I hope, you fail, that you die and turn into a shadow! Tortured until the end of days.” Roderick looked towards the sky to hide a tear. He dragged his hands through his hair and began to shove Ira in front of him. “You and your red hair weigh on us like a curse. Nobody here needs you. You and your tainted body! It would have been better, had you never been found. Or if we had left you for the wild ones! They would have known what to do with you. After all, they already gave you a pretty scar.” He pushed Ira so hard, the other one fell. “I will be speaking ten, no, a hundred prayers next to the body of my son.” He stepped on Ira’s hand and bent down. Ira stayed silent and looked away. No villager intervened; all turned away. “And do you want to know for what, tainted one?! I want the smoke escaping your body to colour the evening sky blacker than the night. It will be a sign that my wish has been fulfilled. Your death ... I will celebrate it. And now ... D ...” A strong gust of wind pushed Roderick and Ira apart. “Tsk,” Roderick hissed, let go of Ira and spat on the ground.

Ira looked around, looked at the other villagers. Their mouths were silent, but no words were needed anymore. The short flare of their eyes and them quickly looking away were signs enough to show the unity of their disdain towards him. Even Mireska didn’t want to answer Ira’s searching gaze. Ira’s thoughts were foggy. He turned onto his stomach and scratched over the hard floor with his fingernails. Balled his hands into fists to express his inner despair. He asked the question, which had accompanied him his whole life: “Why ... Why do they hate me?!” Even if he thought, it was only part of his thoughts, the question squeezed through his teeth and triggered a murmur. 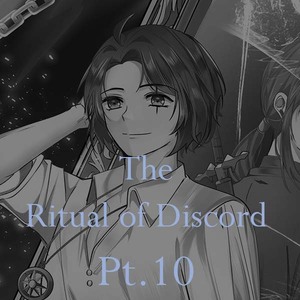