Jones and Beatrice sat at a table inside a small, almost eighties-styled burger restaurant. Jones munched on his sandwich with the vigor of a hungry caveman whilst Beatrice picked off the onions and pickles that she specifically told the waitress that served them that she didn’t want.

“Nice work earlier,” Jones congratulated her in between munches. Beatrice just shrugged as she took a sip of her soda-pop.

‘If only it were a beer,’ she thought to herself in dismay. She sighed mostly to herself but Jones picked up on it.

He placed his sandwich down as he stared at her for a bit. “What’s wrong,” he asked in a slightly worried tone. “Sandwich undercooked or something?”

Beatrice played with the straw in her cup. Twirling circles in her drink absentmindedly.

Jones leaned forward and waved a hand in front of her face. Her gaze shot up to meet his, her face morphing into a questioning expression. “What?” she asked him with a raised brow.

“I sure don’t feel like it,” she responded with a yawn as she laid her head into her arms and closed her eyes.

“Couldn’t sleep again, huh?” he asked as he took a sip of his drink and pulled out his phone. She didn’t respond.    He was certain she had nodded off into the realm of sleep until she moved her right arm to her pocket and retrieved her phone.

She opened her right eye to gaze at the message before standing up and running her hand through her hair. “My ride’s here. I’ll catch you later, Jay.”

He shot her a frown as he folded his arms. “What about the meal?” A part of him told him that was a stupid question to ask. This was Beatrice after all. And if he knew her as well as he thought...

“I’ll pay you back next go around,” she responded as she waved lazily at him and walked out the double doors.

Jay let out a huff as he stared down at his mostly devoured sandwich. “You’ve been meaning to pay me back next go around since a month and a half ago,” he muttered to himself as the waitress came to him with the bill.

Beatrice approached the passenger side of an old, sky blue Volkswagen Beetle where she was cheerfully greeted by its overly energetic driver: a young woman with her black hair styled in a bob. Her slender frame was adorned with a yellow hoodie with roses decorating the sleeves and back, black sweat shorts, white sneakers, and topped off with a black sports cap on her head.

“Hey, hey, hey Brood Queen,” the woman greeted with a wave and a wide smile. Beatrice let out a defeated sigh.

“Max,” she responded, not so cheerfully, as she got in. Max was humming happily to the tone of some campy pop music on her stereo. Beatrice gave her a side glance and contemplated getting out and walking.

“Oh, so I heard through the grapevine that you and Jay are on some big murder case. It was a guy from that big robotics company right,” she beamed at her as she pulled out onto the road. “Pass the deets sister.”

“Awww, come on,” she whined playfully. “We’re friends and friends tell each other secrets.” Max started giving Beatrice puppy eyes hoping to get the woman to let up on the information.

“No, and keep your damn eyes on the road! Are you trying to get us killed!”

Max perked up in surprise and quickly turned her gaze back to the road in front. “Oh, right. My bad,” she chuckled sheepishly. She continued to hum and smile to the tune of the song on the radio.

Beatrice stared at her acquaintance. For the odd-something years she’s known her, she still couldn’t understand how she could be the way she was in a place like Shiko. She was by no means fortunate. As far as she knew, the girl didn’t have any family. She wasn’t even sure if she had any other friends.

Yet Maxine Lawson was always a bright and bubbly person in comparison to the dark and dreary world masked behind pretty lights that most of the other citizens inhabited. From her car to her fashion sense, to her endearingly joyful personality, and her, in Beatrice's opinion, shitty taste in music. How Beatrice secretly wished she could be the same way.

‘Maybe. Maybe it’s all just a facade,’ Beatrice thought to herself.

Beatrice noticed her lips moving and realized she was saying something. She snapped back into focus upon Maxine’s gaze meeting hers and quickly faced the passenger window with a bored and uncaring expression.

“So?” Maxine questioned her with a smile.

“So what,” Beatrice questioned back with a bored tone. She didn’t even hear anything the young woman had said.

Maxine giggled in response. She was already well aware that her gloomy friend wasn’t paying attention.

“This new Karaoke bar downtown. You wanna go this weekend? Or, is food and music not edgy enough for you,” she joked with a smug expression.

Beatrice shot her an annoyed look. ‘What makes you think I’d want to partake in such a childish activity,’ she thought to herself. Of course, the exact opposite of that is what came out of her mouth.

“Fine,” she drawled out with slight venom. “If it’ll get you to stop talking for the rest of this drive,” she mumbled.

“DEAL,” Maxine exclaimed cheerfully as she went back to humming yet another pop song. Beatrice gazed at her once more.

‘How can you always have a smile on your face,’ she thought to herself. For some reason, it burned her up inside. 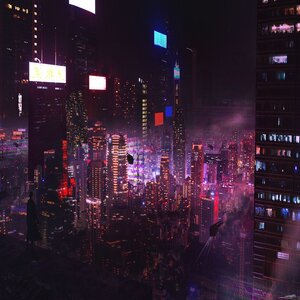