A masculine figure opened a door to a decrepit old house. Its halls and rooms were mostly bare save for a few items such as old toys and photos scattered here and there. For a long since forgotten amount of time, the figure had laid claim to this squat, and its rat-infested floorboards had been the only home he’s ever known since his reawakening.

“I’m home,” he uttered, his voice coming out hoarse and damaged. He closed the door behind him, cutting off the faint light that shone through it and engulfing his home in black- though he didn't need light. Nor would it be beneficial to have any. His cerulean eyes shimmered in the darkness. He could see everything around him clearly. He walked further into the home, his dark cloak trailing behind him, as he made his way into what was once the living room. He sat down on the rotting floor and leaned his back against the wall just under a boarded-up window. He began whistling a tune as he dug inside of his cloak and pulled out a small assortment of breadcrumbs that he managed to scrounge up. After a few minutes, the sounds of small feet scurrying about reached his ears.

A trio of small rodents surrounded him as he flashed them a sad smile from under his hood.

“It’s good to see you guys. Betty, Sherlock, Mina.” He took a small handful of the crumbs and set them on the floor in front of him. The trio of rats quickly started to devour the bread crumbs as the stranger looked on. It didn’t take long for them to completely consume the crumbs and they started to crawl and sniff around the stranger for more.

“Sorry guys,” he chuckled while rubbing his head. That’s all I can give out today. Two of the rats, after realizing there would be no more food handed out to them, scurried off into the darkness of the house. The stranger stared down at the remaining one as it stared back.

“Sorry, Betty. I really can’t give any more out. We’re running low as is.” The rat continued to stare at him with her dark eyes. She moved forward and placed a small paw on his knee.

He relented under her gaze. “Okay, but no more after this. And don’t tell Sherlock or Mina.” He gave her a little extra breadcrumbs which she happily took and munched on as she curled into his lap. Although he wouldn’t admit it around the other two. Betty was his favorite of the bunch.

“I killed another one,” he spoke softly to the rat. “A company shareholder.” A hint of sadness hung in his voice. “I wish there was another way. I wish I didn’t have to hurt those children or his wife. But I had no other choice. I HAVE no other choice. I can’t allow anything or anyone to ruin my plans.”

He stroked the rat’s small form tenderly as it drifted off into sleep. “Everything I do, I do to ensure a future where I can be with her again. And where I can finally be free of the strings they placed on me and the rest of my kind at birth.” He stared down at the sleeping form of the rodent. Watching its body rise and fall with its every breath. He closed his eyes. It would be the first time he attempted to achieve that which humans call sleep. Auto Droids like him didn’t need such a thing. But he always wondered. Was it possible for a machine to dream?

The sun beamed down something fierce though it didn’t bother him. He was a machine after all. And machines don’t feel. Though a quick check via connecting his cyber brain to the local weather station told him it was a little over one-hundred degrees out. Not too un-average for California. The android stood next to a red muscle car watching a trio of birds sitting in a nearby tree outside the police station.

“You’ve just been standing there the whole time”, a masculine voice spoke out from behind the android. The machine turned its cerulean eyes towards the man opening the driver's side door. His brown hair was pulled into a bun, his hazel eyes glancing at the Auto Droid up and down, and his nameplate shimmered under the light of the sun as it lay pinned to his button-up. The name on it read Moreau. And in his free arm sat a little girl eyeing him with a bit of reservation.

“I was just thinking, detective,” the machine responded, turning its gaze back to the small bird family.

“Thinking huh,” Moreau responded idly. He stared at the back of the machine's jet-black hair. “So you're supposed to be my new partner, I take it? You got a name?”

The android turned to face Moreau and nodded. “Yes. My designation is….” Moreau raised a hand to stop the android from continuing.

“I meant your name. Like, regular ol’ human name. Not letters and numbers.”

The Auto Droid looked confused. “I'm sorry, but I only have my designation. Is that not what you're looking for?”

“Can I name him papa,” the girl asked out of the blue as she perked up a bit and looked at her father pleadingly with puppy dog eyes. Moreau smiled at her then looked at the Auto Droid as he responded to her request with an awkward chuckle.

“That won’t be necessary, just my designation, K-100, will suffice,” the Auto Droid responded as he gave an awkward smile of his own to the girl.

“How about Kyle,” the girl blurted out, ignoring his previous words.

“Uh. Kyle?” The Auto Droid raised a brow and tilted his head. The girl looked at him with a large smile beaming across her face.

“Yeah, Kyle. I got the name from this cool superhero cartoon me and my papa watch. You look just like the main hero named Captain Kyle! Your designation thingy ma bob even starts with a K. Pretty cool, huh,” the girl said as she giggled and sat pridefully in her dad's arms

“Kyle,” the Auto Droid uttered to himself as he mulled over the name. He felt a tugging sensation at the right leg of his black dress pants and looked down to see the girl looking up at him with a smile wide enough to reach the moon.

“You and I are going to be best friends. I just know it.”

Kyle looked down in confusion. “Friends?”

“Yeah, yeah, best of friends. What do you say!” She giggled once more as her eyes shut from the large smile she plastered on her face. Her father looked on at the spectacle with amusement as he leaned forward onto the car roof.

Kyle's mouth was agape as he stared down at the little girl, then to Detective Moreau who simply shrugged and smiled, then back down to the girl. He did his best to give her a friendly smile but it only looked awkward and painful on his face causing the girl to giggle even more.

She took his right hand in her left suddenly causing him to drop down to her level and shook it. “Best friends it is, Captain Kyle! Oh, my name's Beatrice by the way. Don’t forget it.”

“Best friends it is,” the Auto Droid responded. He didn't exactly know what being best friends entailed. But something about the child spurred his curiosity.

Beatrice woke up the following morning and glanced around her room. She sat up in her bed and stared down into the palm of her left hand. “Best friends,” she whispered softly to herself. “What a joke.” She clenched her left hand into a fist as she sat in her bed and tried her best to push that dream and those words to the back of her mind. 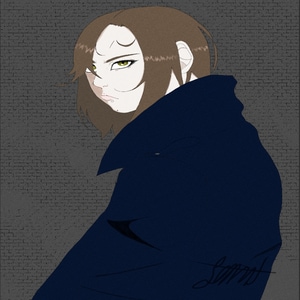