C-77 slowly opened his eyes and glanced around. Above him, a  ceiling fan spun slowly. He moved a bit taking notice that he was in some lightly furnished room laying on top of a bed. The sounds of light snoring hit the Auto Droids' ears causing him to glance to his left. Kneeled over the side of the bed with her head in her folded arms laid a ginger-haired girl fast asleep. Her curly hair was a bit longer than he remembered it and her soft face was adorned with freckles.

He smiled softly at the girl as she began to stir. She sat up and rubbed her eyes as she slowly opened them allowing them to adjust before turning her sea-blue eyes towards her long-time friend. A wide smile adorned her face as she jumped up onto the bed and wrapped her arms around his neck.

‘That’s right,’ the Auto Droid thought to himself. ‘My name is Marckus. That’s the name she gave me.’

Marckus returned the girl's hug as he tried to remember exactly how they got into this house. And where exactly they were. The last thing he remembered was being hacked by an Auto Droid and then…

“MarckMarck, I was so worried. I found you sleeping by the place where we promised to meet. You wouldn’t wake up. I was so, sooo worried.” Tears started to well into her eyes as she hugged him even tighter.

Marckus rubbed a hand through her hair as he attempted to soothe the crying child. “Don’t worry. I just had a little glitch in my systems. I’m fine now, Anna. You don’t need to cry. We’re free now.”

She leaned back but kept her eyes downcast as she sniffled a bit. She was still visibly worried about her friend. Perhaps she even blamed herself for their current predicament.

An idea came to Marckus. “Hey, how about we do something fun, ye?”

A smile adorned her face. “Like, play a game?”

“Yeah, whatever you want to do,” he responded as she slid off the bed and stood there watching Marckus stand up himself before he bent down to her level and placed his hands on his knees. “So?”

The girl took a moment to ponder over it before she smiled at Marckus and grabbed his hand as she began to lead him out of the room.

Marckus raised a brow but smiled and followed nonetheless. Still, something was stuck in his mind. “Hey, Anna. How exactly did you get us from the pier to this house?”

The last place he had remembered being was in Central Market and he doubted Anna, being a human child, had the strength to carry him from there to the pier and get them out to wherever they were.

The girl didn’t turn to him as she responded. “Oh, I had help.”

Marckus raised a brow. “I thought I told you to stay out of sight till I found you.”

Anna turned to him with a smile. “Don’t worry, he’s a nice man. He’s just like you.”

‘Just like me,’ Marckus Mentally questioned. He opened his mouth to say something but whatever it was got caught in his throat as he took notice of the change in scenery. They were in an endless field of Blue Pansies, a flower he once gifted the girl some time ago.

“He’s over there. He wanted to meet you,” the girl said joyfully as she pointed to a singular tree in the distance. Marckus squinted as he tried to make out the figure.

“Anna, who is that?” When the girl didn’t respond he looked down to see her gone. ‘When did she?’ He heard the girl giggle and the sounds of rustling grass. He looked up and saw the girl running towards the figure.

“Anna? Anna wait!” Marckus gave chase. As he neared the tree, he slowed. Standing under It was a man in a white casual dress button-up, black pants, and black dress shoes. Anna stood beside him facing Marckus with a smile

“Who,” Marckus uttered before the figure cut him off.

“I am K-101, an Auto Droid created by the Tomaru Corporation of Advanced Robotics. Just like you, C- 77.”

Marckus stared at him in confusion ‘That voice. I recognize it.’ Marckus’s eyes widened as he was struck with a new realization.

“You’re…” Markus froze up in fear as K-101 stared emotionlessly at the Auto Droid.

“Anna, get away from him now,” Markus shouted at the girl. But she didn’t move. She continued to stare at him with the same smile. Marckus became even more panicked. “Anna!”

“So, the pier is where you hid her.” Marckus’s pupils dilated in fear at hearing K’s voice. K snapped his fingers and Anna’s form began to fade and crackle into noise before completely vanishing.

“W-what?” Markus looked from the spot where Anna vanished towards K then back to that spot. “What have you done with her.”

“What,” Marckus responded as he turned his gaze slowly back to K.

“Though now we know where to find her.” Markus became horrified as he realized what had just transpired. This K-unit hacked into him and used a projection of Anna as Marckus knew her to find the real Anna’s location.

Rage began to build within the Auto Droid.

“Harming and kidnapping humans goes against all Auto Droids core programming, C- 77,” K said in the same monotone and emotionless voice he always had.

“SCREW YOU. YOU DON’T KNOW ANYTHING ABOUT ME, ABOUT US!” Markus charged towards the form of K with the intent to kill before the world around him faded away and he fell into an endless void screaming.

His eyes darted open as he awoke back in the real world. His arms were still bound by the mag-cuffs as he sat in an all-white room at a steel table. Across from him sat the same Auto Droid from the illusion. The same one that hacked him.

Marckus let out a shaky breath as he glanced down at his reflection on the table.

“There’s no point in the silence. We know you are the one that killed Mr. Daughtry and kidnapped his daughter. We know where she is. There’s no more reason for you to hide.”

Marckus continued to look down. 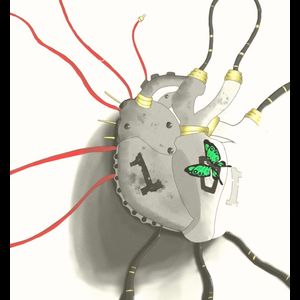