Anna awoke the following morning to the sight of a cream-colored ceiling, a fan spinning slowly above. She sat up a bit and rubbed her head. It hurt something fierce. The events from last night were still somewhat fresh in her mind.

She turned to her left and noticed Beatrice still sitting in the chair. A pair of black earbuds were in her ears and Spike was resting peacefully at her feet. Anna noticed the bags under her eyes and her tired expression.

‘Did she stay up all night watching me?’ she mentally questioned.

Beatrice yawned and glanced over towards Anna. Upon noticing she was awake, she flashed the girl a small smile.

“Hey,” she greeted as she rubbed her tired eyes.

“I did,” Beatrice replied with a yawn.

“Because of me,” Anna uttered. Beatrice stared at the sad expression on her face before shaking her head.

“Because I chose to,” she responded.

Anna looked away. “Sorry,” she apologized.

Beatrice leaned in and lightly flicked the girl's forehead causing a small surprised yelp to escape Anna's lips. “Stop doing that. Apologizing for things that aren’t your fault.” Beatrice smiled down at her.

“As I said, I chose to stay.” Anna looked at her with glistening eyes.

“Thank you, Ms. Beatrice,” she replied to the woman.

“Just Beatrice is fine. You should go and clean yourself up.” Anna nodded as she stood up to go to Beatrice’s bathroom. Beatrice followed suit, leaving her room and entering her kitchen to retrieve a canned beer.

Within a few minutes, Anna came out of the restroom and into the living room. Beatrice was reheating some leftovers for the girl. Anna's eyes landed on the canned drink. Her mind started swimming with unpleasant memories. The memory of the horrid stench of alcohol clinging to her father pervading her senses.

“Here you are,” Beatrice said with a bit more enthusiasm than what she usually displays. She sat the food on the island and noticed Anna wasn’t moving. She seemed almost like she was caught in some trance.

“Anna,” Beatrice said, trying to get the girl's attention. Her gaze was fixed on the canned beer on the counter. Beatrice noticed where her eyes were facing and her brows dipped slightly in confusion. She called out to the girl once more.

“Earth to Anna.” Anna perked up a bit, seemingly broken from her trance-like state, and faced the woman.

“You alright,” Beatrice asked as she moved forward to give the girl a once over. Anna took a fearful step back. Beatrice noticed this and frowned.

Anna realized how this action may have looked and dropped her head in shame. “S-sorry I…” Her voice cut off before she could finish her sentence. She stood there in silence a bit before she spoke again.

“Can you not drink those please, Ms. Beatrice?” Beatrice looked at her in confusion.

“What, this,” she asked, picking up the canned drink. “It's just a drink. It’s kinda like soda.”

“Not really,” Anna responded in a low voice.

“Look kid, I appreciate the concern but I’ve been drinking these for a loooong time now and I’m still perfectly fine.”

“That’s not it,” Anna responded as she began to shake slightly though Beatrice didn’t notice.

Beatrice frowned. “What’s the big deal? It’s just one can.”

“It makes people do bad things,” Anna argued back.

Beatrice looked at the girl with barely contained irritation. “Anna, you're in no position to boss me around like you’re my mother. Thanks, but I’m more than capable of handling a few...”

“JUST STOP,” Anna shouted, cutting Beatrice off and causing the woman to fall silent. Her face was full of surprise from the sudden outburst. The stench of alcohol in Anna's senses was overpowering. Her mind was flashing with images of all the terrible things her father did to her and Marckus.

“YOU’LL JUST GO CRAZY AND HURT ME LIKE HE DID!”

Beatrice’s expression softened. ‘He,’ she thought to herself.

“Like who?” Anna's shaking was uncontrollable now. Beatrice wished she hadn’t asked. But a part of her wanted to know why this girl was like this. It couldn’t have been solely because of the Auto Droid, could it?

“Was it something Marckus did?” Anna shook her head vigorously as she felt around in the pockets of the shorts she wore for the flower Marckus had gifted her. When she couldn’t feel it her panic intensified.

Beatrice thought about what could be causing such a reaction from her. Her reaction at the peer, the pain and trepidation Anna displayed when she first brought her into her home, last night. Something was seriously ailing the girl. But if it wasn’t the Auto Droid. Then what was it?

Beatrice contemplated this as Anna began to hug herself, fighting back the urge to cry. Then the pieces started falling into place. The battered state she and Jay found Anna, the Auto Droid saying he accidentally killed her father whilst defending himself and Anna, and last night she heard her muttering something about her father in her sleep. Could it be?

Beatrice looked at Anna as the girl sat on the floor and curled into herself. She sat down next to her.

“Was it your father,” she asked. Anna buried her head into her knees and gave no response. That was all the confirmation she needed.

Beatrice regarded her with a sorrowful expression before leaning in and wrapping an arm around her. The contact surprised Anna as she tensed up a bit but after a while she relaxed into Beatrice. She managed to calm down a bit.

“Why did he hurt me,” Anna asked out loud to no one in particular.

A feeling of guilt overtook Beatrice. Marckus was, perhaps, telling the truth. And they just handed this girl’s only hope, only friend, only light within her life over to Tomaru Corp. to have his memory wiped, and lied about it.

She and Jay were as much to blame for her current state as her father in her eyes now. She wished she could undo everything but it was too late. But she would do her best for her. She had to.

“I’m alone. Everyone I ever loved has left me alone. I don’t know what to do. I just… I just want Marck back. I miss him so much,” Anna said in between light sobs.

It took a while for Beatrice to figure out what she wanted to say. She looked down at the girl and her left arm. “You’re not alone. Not anymore.” Anna looked up at Beatrice with teary cerulean eyes.

They were only a few words but they had a great impact on her, bigger than what Beatrice thought they did anyway. But those words weren’t just for Anna. Here beside her, Beatrice found someone whom she could relate to. Someone who was once friends with a machine, someone who had lost family, someone who knew what it was like to be left alone in this cruel world.

Whether she was conscious of it or not, Beatrice also said these words for her own self.

“Come on,” she said with a smile. “Spike has been eyeing your plate for a good minute now.” Beatrice pointed a thumb at the aforementioned dog who was sitting down staring up at the kitchen island where Anna's food was. He looked over at the two staring at him, licked his snout, then back up at the food.

Anna giggled slightly as she rubbed at her eyes. “Thank you for this, Ms. Beatrice.”

‘I’m not alone,’ Anna thought to herself as the two of them stood up and moved towards the kitchen to eat. 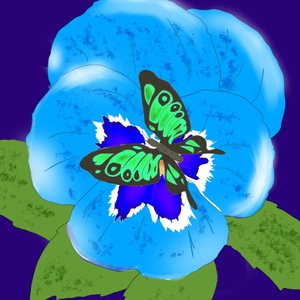