“So, like, you promise me he’s not a serial killer?”

My best friend and roommate Whitney was half-leaned over the bar, contemplating her phone. I knew she was on the profile of some guy named “Justin4335”—he was supposed to meet her here in a half hour, but I also knew Whitney. If he was running late, or if Whit got a better offer between now and then, well…the word MANEATER wasn’t over her head for nothing.

I looked over at her phone. “I honestly can’t say.” I couldn’t pick up on someone’s vibe over the internet, unfortunately.

Whitney gave me a look. “What good are you then?”

“I’m your permanent wingman!” I protested. “But only in real life situations, and preferably ones that don’t happen where I work.” I gestured meaningfully at the tray I was filling up with IPAs.

Whitney rolled her eyes. “I know Sasha gave you twenty bucks to set her up with Logan.”

“Real lifeeeee,” I sang at her, walking by with my tray.

That’d been an easy match—every time Logan saw Sasha in class, his eyes lit up. I didn’t even need to read the words RELATIONSHIP MATERIAL softly scripted above his head, nor the slightly more intense FUTURE WIFE written above hers.

If I’d just been able to get them together in a closet, seven-minutes-in-heaven high-school style, things would’ve taken care of themselves.

But somehow technology made everything harder. People felt better if they spent money on me getting them a “sure thing” and didn’t leave meeting people up to random chance.

And I guessed I liked the fact that my stamp of approval counted for something—after all, I saw a cheerfully pink MATCHMAKER!, in the mirror firmly over my head when I brushed my teeth in the morning, plus or minus the exclamation point depending on how enthused I was to be awake that day.

It was what I was good at—too bad it didn’t count as a real career. Getting sent twenty bucks now and then was not going to begin to cover my student loans, as fun as it was.

I ran my tray of beers out to their table and coming back I saw a strange man come in with the word ENTITLED etched over his head like it was in stone. He made a beeline over to Whitney’s side, where she was still lounging with her curvy hip jutting out.

He did not look like Justin4335’s photos in the least, and I could tell by the way he was moving for her he felt entitled to pinch her ass.

I practically skipped over and shielded my best friend’s admittedly attractive butt with my tray as his hand came up. “We don’t do that here,” I said, giving him my best customer service “I’m nice, but don’t make me cut you” smile.

He frowned at me, clearly wondering what kind of girl-radar I’d used on him to read him at ten paces, and retreated.

Unfortunately, he didn’t leave—he went to hang out with the table I’d just served. I’d have to keep an eye out for him for the rest of the night.

Whitney looked over at me, having missed the altercation in its entirety. “I love you Elle, but you’re so weird.”

Whitney wound up leaving with Justin—the only words floating over his head were GYM RAT, and his pecs lived up to it—and then Chance showed up.

“Hey, Elle!” He waved at me as he sat at the corner of the counter like he always did, and I brought him the same beer I knew he’d order.

“Hey.” I smiled at him, and teased him a little with the beer, hovering it over the bar. “Isn’t it a school night? Don’t you have something to be studying for?”

Instead of studying me? I didn’t need to read the word YEARNING over his head when he looked at me—I could see it in his eyes.

Chance was a friend, a good one, and I knew I needed to break it off with him—only there was nothing between us to break, which made things awkward. I felt weird enough with my powers, I didn’t want to go around kicking puppies.

The door on the far wall opened, letting in a rush of people, all college types, except for one—and for once, I was looking at a person instead of reading their word. Dark hair, dark eyes, well-built but lean…he was hot, but this was a college town, right next to a city—a lot of guys here were good-looking and into sports.

No, there was something about his presence that was different from the rest.

Despite probably being around my age…he most definitely was not a puppy.

He fell into a corner, talking to someone, and by the time I tried to read him there were too many other people’s words in the way, the bar was a veritable alphabet soup.

Maybe his sign was BILLIONAIRE LOOKING FOR LOVE or PRINCE OF A SMALL ISLAND NATION.

“I won’t,” I told him, trying to sound firm, and then moving on to do my job.

It was a busy night. I got tipped well, and Chance insisted on staying till the bitter end with me. “I’m fine,” I told him. “The bus stop’s only two blocks away.”

“Totally. I’ll see you tomorrow in class.” I waved him off, washed three more glasses, then tossed an air-kiss to the closing waitress, before heading out the door.

It was cold and dark, but I had my coat on and I’d made this walk a million times before.

Which was probably why I could immediately feel eyes watching me.

The bar wasn’t on an entirely empty street, and lots of times there were drunk people out at night. Still—I swiveled my head around some, and caught the hot guy from earlier, still hot, but now walking behind me, his word impossible not to see.

I whipped my head back around as my heart jumped into my throat.

I had known something like this was probably only a matter of time, right? I mean, having my skill, I was going to bump into someone bad, truly bad, eventually.

I just didn’t think they’d be heading my direction.

My feet were picking up speed, and I was scared to look back and see if he was still there behind me.

Just because he’s a killer doesn’t mean he’s going to kill you.

No, he’s just hanging out on this lonesome street in the dark because….

I snapped and bolted for the bright lights of the bus station across the street without thinking.

I heard a squeal of brakes and then felt someone tackling me.

Only I hadn’t. I was on the asphalt, and the bus I’d almost gotten hit by was idling, its driver coming out to see what was happening, and a man’s arm was wrapped around my waist like a seat belt. I sat up quickly and looked back, where my KILLER was disheveled, a lock of dark hair hanging over his face, his coat open and his shirt twisted up, showing a hint of abs.

He sat up beside me, and his sign didn’t change, not even as he looked deep into my eyes and gave me a slow smile. “Is this always how you catch the bus?” 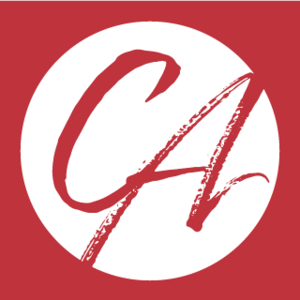 So excited to finally get to meet you all! I’m Cassie, the writer for A Killer Date, and I love Elle and her Mystery Killer so much already, I can’t wait for y’all to read more! If I had a word it’d say WRITER…or maybe BIG NERD…or maybe CAT LOVER–how about you? 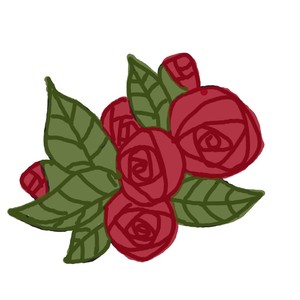 This is an interesting concept, can't wait to see where it leads. You've got me hooked in the first chapter! edit:ah yes, to answer the question in the end note...my label would probably be...Oblivious. I'm always in my head, missing what's around me. 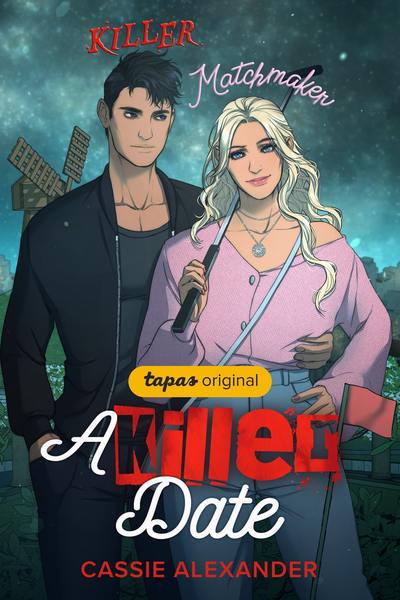 Everyone identifies themselves a certain way—by their job, by their outlook, by their location. College student Elle can see the label that best sums up a person floating above their head, and when she looks in the mirror, the word she almost always sees is “matchmaker.” Among her circle of friends, she has a nearly perfect success rate for setting up excellent flings, summer romances, and long-term relationships. She can also spot liars and cheats at one hundred paces, thanks to her gift.

And then she meets the one person whose identity she wishes she couldn’t know. Being at the wrong place at the wrong time throws her together with Byron, a ruggedly handsome, if tortured, guy—oh, and he has the word “killer” floating over his head! Elle is terrified, but she also feels like she has an obligation to do some detective work and figure out what Byron’s deal is. Eventually, Elle is drawn into Byron’s world, including a criminal organization known as the Syndicate. But she’s really in trouble when she realizes she’s drawn to him, too.
Subscribe 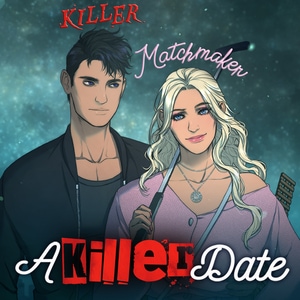