The eight of us look over at Aura, Ren, and Juni. They stand on the back porch. Ren keeps his arms around Aura. Juniper holds her hands together as she watches us.

Ren smiles at me. “Watch out for one another, okay?”

We all glance over at one another. Soveliss’s eyes are already glowing a bright blue as we look back at Amai’s parents and Saisho’s friend. We start to back up to let Soveliss do his thing.

Soveliss circles his hands around before him. “Alright. Let’s go to Destiny!”

A portal opens up on the ground. One by one, we each jump into the circle. Soon enough, the portal snaps shut behind us once everyone is in. We continue to fall. Rainbow colors surround us as we make the journey down.

After a few moments, we hear Naomi speak.

As our surroundings change from bright colors to a lush forest, an orange mist showers over everyone. Everyone crouches down. I feel fine as I see the Forest of Vibrance around us.

Immediately, I reach forward to catch Allisa. She has trouble keeping herself up after the trip. She winces a bit, clenching her eyes shut. This must have taken a toll on her. Allisa isn’t Written so she probably doesn’t travel between the two worlds much, nor does she have the ability to relieve the pain with magic.

Allisa looks up at me after a few minutes as she smiles.

“Thanks, Iki.” She whispers. Allisa starts to try and get up.

I move to help lift the elven girl up. “It’s alright,” I say. I squeeze her hands with a grin. “I’m glad you’re safe.”

“Should we get moving?”

The two of us look at Soveliss. He dusts himself off after speaking. He watches us expectantly.

“Yeah,” Amai whispers, “Let’s go. We need to get to the observatory safely.”

All of us successfully get up without any interruptions or hazards. As we make our way to Taruna Observatory, I watch our surroundings. I don’t want to believe that something could happen, but after our last visit to Destiny…

I’m not sure if we can trust ourselves.

Soveliss walks up the stairs to the observatory door. He unlocks and opens the way inside. We all take the invite. Everyone gives the elven man some sort of thanks as they make their way inside. I pat Soveliss’s shoulder as I pass him.

We walk inside. I can smell old books as I close my eyes. I smile. I open my eyes again to see all of the materials in the library.

We’re back to something familiar in Destiny.

“Okay,” Soveliss says. “I need a few people here to help me go over some details about the whereabouts of Violet and Kaen.”

The elven girl nods. “Yes, she’s the one who went missing not too long ago.” She says. “Hm… I wonder if the Blades know anything.”

Allisa nods as she glances at me. “Kaen formed a group called the Blades a while back. They’re all Written, each of them pretty good friends with each other.”

“They’re super strong,” Naomi says. “Kaen was especially; she was the leader. They went by the name… Kindred Spirit, I think. Is that right, Soveliss?”

“I don’t know, Naomi,” Soveliss grumbles. “I would have to check the Archive the next time I can get my hands on it.”

“What’s that?” Saisho asks. He crosses his arms. “Another device?”

“No, no.” He mutters. “The Written Archive is a magical book with the entire history of Written individuals. It has their names, Written Names, images of their forms, status on if they’re alive or dead… or… if it can even find them in Destiny or the Normal.” He starts to trail off at the end. “It updates by itself all the time when new information is learned, but it can only tell us so much.”

“Do you think we’re in there?” Amai asks.

I put my hands on my hips. I look at the two girls.

“Did you not listen to Soveliss?” I ask with a snap. “It’s the history of every person who has Written magic. It probably updated itself to have all of us in it the second we even got our Charms.”

Within moments, I see Sakasu put her hand on her Charm. Her voice rings in my ears.

“What’s going on with you?” She asks. “Your attitude is more prevalent than usual.”

“Doesn’t give you a right to snap at people.”

I look at Soveliss and Allisa.

Allisa puts her hands on her hips. “What do you mean?”

“Why do you want to find them?” Soveliss asks.

I cross my arms. I look at the others, then I close my eyes. I tilt my head up a little as I open my eyes again, sighing.

“Maybe to ask some questions. See if we can find anything about Kaen’s disappearance.” I suggest. “It’s the best way to get clues.”

We look out the windows. Sakasu’s girlfriend is right. The sun has set on the day, and that means Corruption will be more active. Even if I am more experienced than the others, I’m not as experienced as Naomi or Soveliss. I wouldn’t know what to do if I saw Corruption at night.

And let’s be honest, I don’t think I’d defend myself well with how I’m feeling right now about everything.

“How about I embark for their location in the morning?” I ask. “I can go to the Blades and see what information I can get.”

Saisho crosses his arms. “Do you plan on going alone?” He asks. “Wouldn’t be very smart of you if you did.”

I don’t want a potential backstabber following me around. Sorry, Saisho, but I don’t trust you right now. And I don’t trust that Amai won’t make this all about finding Violet, or Sakasu and Naomi get distracted in trying to act tougher than they are.

Wait, what are these thoughts?

“Well, it might be best if only one of us goes,” I suggest. “That way we don’t possibly overwhelm them with people?”

“She’s right,” Allisa defends me. “But that doesn’t mean you should go completely alone…”

We all look at the entrance from the hallway. A small, white fox with three tails trots into the room. She smiles at us as her ears fold back, the tails wagging in sync. Her blue eyes seem to shimmer a bit.

Sakasu runs over to the fox. She puts her arms out as the fox jumps into her arms. Snowie wiggles around a bit.

“You came back!” Snowie giggles. “You’re home! Oh, did you bring chicken?! You promised!”

I look at Snowie as Sakasu sets her down. I smile a little.

“What was that about wanting to come with me?” I ask. “Snowie, do you have clues?”

“Clues?” Snowie says. “No, but I know where the Blades live. I can take you to them! Besides, they love me- everyone loves me.”

I think for a moment. While Snowie does have some magical capabilities, the others could be useful if I have a run-in with Corruption. But I also don’t fully trust all of my friends right now…

I look at Amai. She crosses her arms and looks at me with a dull expression.

“We can stay here. Let Ikimono take Snowie if she wants.” Amai grumbles.

I shrug the statement off.

Ikimono has a new mission; find the Blades. 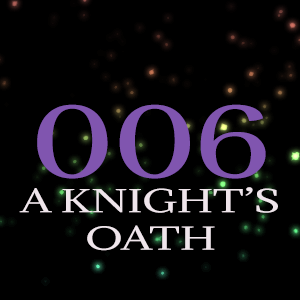