“Have you…I mean…” Israel’s finger flicked behind his ear for a moment, rustling a few strands of bleach-blond hair. His silence trailed on unusually long, and the look on his face grew increasingly tense.

“Have I what?” Manny was glaring down at his notebook, a plate of cafeteria food beside him, pencil chiseling away at an algebra equation.

“Like…I mean…” Israel jumped in his chair slightly, causing a bang that echoed through the voice-filled campus cafeteria. “Been…seeing…that…that…” A hand flipped through the air for a moment.

The math problem evaporated from Manny’s head. He looked up. Israel was staring back at him, teeth grit nervously, giving his friend an uncertain stare.

“Uh…no. No, what do you mean? Why are you asking?” Manny’s face went blank.

“I dunno, ‘cause it seems like he’s still around.” Israel shrugged awkwardly. “The other day, I ran into this random pregnant girl who was looking for him.”

“Yeah, you’ve seen her too?!” Israel looked mind-blown. “Yes! That was her name! And she was acting like her life depended on finding the dude!”

Manny slowly lowered his eyes. “Well…I’m sure she’ll find him soon.” She won’t have to, he knew. He’s going back on his own.

“That was weird,” Israel reflected. Then, expression changing like his mind had flipped a switch, “So. How’s the algebra coming?”

Manny did not get a chance to answer. With his eyes on his notebook, he did not see anyone approaching until a heavy hand gripped his shoulder. Someone took the seat beside Manny. The student turned to see a familiar and foreboding face. His throat instantly went dry, mind freezing up.

“Uh…” Israel was the first to speak. His blue eyes sized up the newcomer, and he smiled hesitantly. “Hi, Brice…?”

“Hi, Israel.” The heavy hand tightened on Manny’s shoulder, and Manny felt the frat boy turn towards him. “Hi, Manny. Fancy running into you here. Where’s my money?”

Manny’s fingers fell limp on his pencil. “I…I don’t have it, yet.”

“Yeah, well, you’ve had some time. How much do you have so far?” Brice was wearing a confident smile, his stare aimed belittlingly downward at Manny. “It’s 250, now, you know. And by tomorrow, it’ll probably be 300.”

“Manny, what’s he talking about?” Israel cocked a thumb in the frat boy’s direction.

“I’m not gonna give you much more time,” Brice warned levelly. “I need my money.”

“Brice, what the hell are you talking about?” Israel drew his arms across his chest. “What do you mean, Manny owes you money?”

“He owes me for that whore he slept with,” Brice replied easily. His eyes turned back on Manny. “That little faggot slut he slept with.”

Israel was a mixture of bewildered and irritated. He turned to his friend, a look of frozen disbelief on his features.

Manny tried to swallow, nervous glances darting between Israel and Brice. “I—I’ll pay you back,” he promised. Then, suddenly fearing Brice was about to say something else about Angel, “Tomorrow. I’ll pay you back by tomorrow night, ok?”

“Then I’ll be back to collect tomorrow.” Brice grinned threateningly. But he stood up and walked away from the table.

No sooner had he left than Israel made an emphatic gesture at his receding figure. “What? What? Manny, how do you owe Brice money!?”

But Israel had apparently guessed exactly what Manny had feared he might guess. “Who is that Angel person? What’s going on? You were paying to sleep with him!?”

“No.” Manny shook his head quickly. Then, uncertainly, “Yes. Maybe. Look, I was drunk. I didn’t know what was going on. It wasn’t until much later that anyone told me.”

“Angel is a prostitute?” Israel had gone as pale as snow, a deathly look of shock on his face.

“Manny!” Israel’s voice hushed to a horrified whisper. “You slept with a prostitute!? Prostitution is—is illegal! And dangerous! And—and illegal!!”

“I didn’t know he was a prostitute when I slept with him,” Manny defended in an equally hushed voice.

Israel’s arms splayed stiffly across the table. “When were you going to tell me about this? How—how long have you known?” Then, jerking back against the backrest of his seat, “Did you use a condom? Damn it, Manny, I should take you to a clinic to get screened.” Then, the horror on his face deepening still further, “Brice is pimping him out!? Brice, the frat boy!? Brice—Brice is part of a fraternity—he’s pimping someone out in the frat house?”

“No, it’s…it’s not like that,” Manny breathed. “Angel has a pimp, and the pimp is demanding payment from Brice. Brice is charging me a certain fraction, or something. A-and I don’t want to go to a clinic, I—”

“A fraction?” Israel’s eyes widened to impossible proportions. “As in—as in—you weren’t the only one who had him that night?!”

“Yeah, he…” Manny made a weak gesture with his hand. “They said…they…r-ran train on him, or…something…I didn’t understand…” Horrible memories of that dream flashed in Manny’s head, and he shut his eyes for a moment.

Israel slammed his hands down on the table. His lips moved in a pale effort to make words, but nothing came. He suddenly stood up and walked around the table. Israel grabbed Manny’s shirt collar and dragged his friend to his feet. A scattered gesture was made towards Manny’s backpack and algebra supplies. “Pick up your things. We…we need to go outside.”

Under a tree in a desolate corner of campus, Israel broke the silence, again grabbing Manny’s shirt collar and yanking on it several times. “Shit! Shit! Shit! Damn it, Manny, do you know what running train means!?”

“It’s gang-rape!” Israel cried. “It’s a misogynistic term for gang-rape!” he released Manny’s shirt and gestured out in an arbitrary direction. “It’s a felony, Manny—it’s a felony to be even remotely mixed up in something like this, do you understand!? It’s a misdemeanor just to sleep with a prostitute! Do you understand what even a misdemeanor could do to your career!? Especially if it involves a sex offense of some kind!?”

Israel sighed. “Manny. Manny, you can’t ever do something like this again. Pay Brice whatever you owe him and get free of it. Shit, and don’t go back. I’ll steer clear of Zeta Phi, and you do the same, ok? They’re mixed up in some really bad shit, and you don’t want to be a name they remember when they go down for it.”

“And I’m taking you to a clinic to get screened. Today. Sometimes if they catch those things quickly, you can get rid of them. Or treat them a lot better, anyway.”

“Some of these tests take a little longer, and we’ll have to get back to you with the results in a week. You should also get tested again in about one month. But, from the preliminary tests, everything came back negative. So far, so good.” The nurse at the clinic had been nice. Manny had never gotten himself tested for STDs before, and the process had been a little uncomfortable. It had also taken all the time Manny could have used to go to Leon’s apartment and ask for money.

No matter, he could go tomorrow. It would have been a little more convenient to do all the pride-disposing in one day, that’s all.

Manny swiped his key card and unlocked an empty dorm room. As he had expected, Angel was gone. But regardless of how little it surprised him, it still deeply disappointed him.

In the shower, Manny ran his hand down along his inner thigh. He would never feel that touch again, would he? Those soft, beautiful lips. Incredibly skillful tongue. He should have stolen a kiss while he had the chance. He had had the chance. He should have done more. Washed Angel’s clothes himself. Gotten him some real food. Given him some clothing. Paid for an Uber to take him where he was going.

But the next moment, Manny was glaring at the shower wall, doing his best to defy his own feelings. Paid for Angel’s Uber? More money Manny did not have.

After he got out of the shower, Manny scoured his dorm room for whatever cash he had lying around. It came out to a little over eighty dollars. With one more drawer to check, Manny walked over to his desk. But he froze when he saw his trash can.

There was bandaging on the top, lying amidst wadded pages full of algebra equations and bone drawings. He had taken it off already.

Manny lowered himself to the floor and silently picked out a strand of bandaging. He lifted it slightly, a lump developing in his throat. Suddenly remembering the sheets Angel had slept with, he glanced over to the place on the floor where they had been spread out. But it was not until he looked up at the shelf where the laundry detergent had been placed back where it belonged that he found the sheets: neatly folded beside the clothes Angel had borrowed. Manny’s blanket was back on his bed. The bowl Angel had eaten cereal out of was washed and dry in the dishrack. 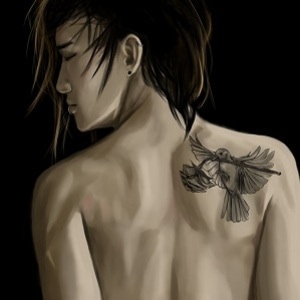