“Incredible!! You look so cool!” Leon marveled at the lieutenant captain, fully dressed for space exploration.

Around his chest wrapped metal armor, topped with a plating that resembled extreme shoulder pads. Two giant yellow jetpacks were strapped to the back, along with a smaller one strapped on each metal sandal he wore. Leon and Jun wore the same thing, but his armor had a few tweaks to distinguish him as a lieutenant. Plus, he wore it with more style somehow.

Emil blinked and laughed in disbelief. “Really...?” he asked as if this were the first time anyone told him, which couldn’t possibly be true. “Oh. Wow! Thanks so--!” He coughed, then spoke in a lower pitch. “Thanks, Rookie!”

“How come we have a mirror here?” asked Jun. “The walls and stuff are already reflective.”

The blond shrugged in response. Meanwhile, Leon looked at himself in the mirror, clad in all his armor. All that was left was the helmet, so he decided to put it on.

He turned around to see Jun. The rubber neck lining of the IF jumpsuit was stretched over the eldest ranger’s head. Both of Jun’s eyes were revealed, as the black bangs that usually covered the right one had been tucked into the makeshift cap.

“You gotta wear it like this before putting on your helmet.”

“Oh yeah!” Leon remembered. “Thanks for reminding me!” He promptly pulled his neck piece over his head, then slipped on the helmet.

Emil did the same. He also pressed something on the side of his helmet. A click sounded in Leon’s.

“Can you guys hear me?” Emil’s voice crackled over the headset.

“I can!” Leon confirmed.

“Great!” Emil could be seen winking through his helmet. “Now’s a good time for a quick refresher course on safety and the controls. Jun, I know you know all this already, but bear with me. So first, lift up the right panel on you guys’ helmets and press the button underneath that. What that’ll do is secure your helmets to your necks. Then jiggle the helmet around a bit. If it pulls at your neck, then you know it’s on tight enough to keep all the oxygen in. Do the same with your gloves, too. Lack of oxygen is really rough on the skin!”

Jun and Emil started testing out their helmets and gloves, and Leon followed their lead.

“Okay! Now that we’re all safe, we can go over the jets. They’re controlled by these buttons under our chest plate thingy.” He pointed to four buttons underneath the triangular plate on his chest. “The top ones control the jets on our backs; the bottom ones are for the jets on our feet. And now that we have on our jumpsuits--”

Leon’s eyes widened as Emil lifted one of his foot jets up to his arm.

“--I can show you guys something neat!”

“Lieutenant, please refrain from using the jets inside of the ship.” The captain’s voice cut in. “You will propel yourself across the loading deck.”

Visibly disappointed, Emil put his foot down. His attempt to set himself on fire was thwarted yet again.

“Is everyone prepared for the loading deck to be drained?”

Emil paused for a moment. “Yeah, I’d say we are, Captain!”

“Affirmative. I will commence draining out the air from the loading dock in T minus ten... nine... eight...”

There seemed to be no change when the captain reached zero.

The lieutenant checked on the others. “You guys are still able to breathe, right?” Leon and Jun confirmed that they could breathe. “Okay! We’re all set for the hatch to open.”

Captain Galhardo began another countdown, and after reaching zero, the door at the end of the loading deck lifted up to reveal nothing but a starlit sky. A lack of gravity was the only thing keeping Leon from running out into the twinkling expanse.

Jun and Emil flickered their shoe jets to propel themselves forward, so Leon did too… Only he held on too long, so it skyrocketed him out of the ship. This surprised him, but even though he’d flung himself uncontrollably into space with no known way of stopping, he kind of enjoyed himself. Stars surrounded him in every direction. What more could he want?

He felt a hand grab him, yanking him backward and back into reality. This caused him to spin around, revealing that his savior was Jun. Emil floated toward them.

“Whoopsie, that was a close one! If you ever find yourself unable to stop,” Emil began, “try to use the same force to propel yourself in the opposite direction!” He demonstrated this by kicking his legs out in front of him and firing his shoe jets. His momentum slowed to a near halt. “There’s no breaks in space, so you won’t be able to stop completely, but it’ll slow you down quite a bit!”

“Thank you… Thank you both!”

Emil chuckled. “No problem. Anyway, I’ve been talkin’ your ears off long enough. If you tap the button on the right panel on your helmet--”

“It must be very exciting for you.” She sounded so nice, so serene. Having Mia as a partner meant he could finally get to know more about this mysterious girl. It thrilled him to think that they could be friends, and he really wanted her to like him.

“Yeah!” Leon watched as Emil and Jun split off from each other. “Hm. Jun and Emil left. I guess that means we’re just supposed to do whatever.”

“I… I don’t know for sure, but make sure to stay around the ship, okay?”

“Okay!” He answered. “Do you know where the Earth is from here?”

There was a pause. “It should be onnnn--- Okay, let me figure out where you are in relation to the ship… Oh, there you are. It should be to your left.”

“Oh, thanks!” responded the bucktoothed ranger. Mild embarrassment overcame him. “...How do I turn?”

“Uhhh… It’s been a while for me, but. I think you stick your right leg out and pulse the jet on that foot?”

Leon followed her directions and began floating to the left. “Hey!! It’s working! Thanks so much!!”

He heard some kind of noise of surprise from her end. “Um, please tone it down some. I am wearing headphones.”

“Oh, sorry!” Leon covered his mouth with a hand, even though the helmet blocked it from making any difference. “So… you’ve done this before? How was it?”

“Nerve-wracking, but… okay in the end.”

“Nice! I mean, the ‘it being okay in the end’ part, not the nerve-wracking part, haha!” he clarified. Something to his left caught his attention. “Hm?”

“Oh, I just noticed… I just noticed…” To his left floated the entire Earth, not just the section he saw from the ship, the full planet. Swirly clouds and land masses of varying colors decorated the giant blue marble in the sky. In that moment, it was just him, his home planet, and the millions of stars and other celestial bodies surrounding them both. This was peace. This was paradise. He felt tears come to his eyes.

“I just noticed the most beautiful thing I’ve ever seen in my life…!”

The tears in his eyes made it hard to see the Earth, but it was no less breathtaking.

And now we're back to Leon. See him step into the stars! 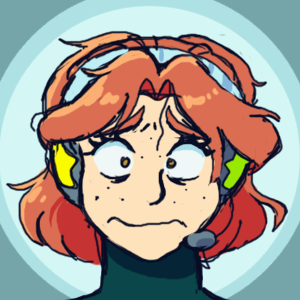