We keep walking in the Forest of Vibrance. I can hear the birds chirping around us as we stay quiet. I don’t even look over to Maeko; I have no reason to talk to her right now. She’s just someone I’m helping for the time being until we can find Kaen.

Or, I guess, Violet as well. She might be a clue to finding Kaen. Hopefully they’re together so it’s not so much of a hassle.

As we walk, I find myself lost in my thoughts. My mind drifts to a particular elf with long platinum hair. She’s been awfully… kind to me the past few days, more so than when we first met. I’ve also found my reactions around her to be different. I’m happy around her, as if I’m around Nova, but there’s a bit more happiness? I don’t know how to describe it. All I know is I’m feeling something I’ve never felt before.

“So,” Maeko looks over at me. She interrupts my previous thoughts. “What’s going on with you and Allisa?”

I quickly look at the red-head Blade. I purse my lips. “Um. What are you talking about?”

Maeko giggles, “Oh, come on. I saw you two holding hands.” She playfully narrows her eyes. “You two…?”

“No!” I say. I grit my teeth. “We… I don’t think there’s anything going on between us. She just… really missed me, I think…”

I mean, we are, aren’t we? Nothing huge has happened between me and Allisa. Maybe the hand holding is a little out-of-character for me, but I think it was just her keeping me close so I could see the book easier. I dunno.

But then why did we hold hands the whole time?

Something tells me I should talk to Sakasu and Naomi once I get the chance. They probably know a little more about this. Especially Naomi, seeing as I’m pretty sure she’s been friends with Allisa for a long time. The two of them might be able to give me advice, pointers, or something to help me understand what’s going on.

I should do that next time I see them.

She rolls her eyes. “Sure, alright,” Maeko hums.

She grins at my question. I see her cheeks take on a similar hue to her hair. She looks to the side.

“Yeah,” Maeko says. “We’ve been dating for nearly a year and a half now. They’re really sweet. They love to surprise me every now and then with little stuffed animals, and they’re a great cook. You gotta try their mac-and-cheese balls sometime.”

I cross my arms. “They seemed really shy when I first met everyone.”

“Ah,” Maeko purses her lips, “They’re like that with everyone they first meet.” She shrugs. “They’ve always been somewhat skittish around people they don’t know.”

“Did I do something wrong?”

“What? No,” Maeko glances at me. “They probably weren’t expecting your arrival the other day. “

Maybe Maeko is right. It’s probably just in their personality. They couldn’t have been expecting my arrival; heck, it seems like none of them were. Even when Snowie and I found Sara sleeping in that tree, we weren’t expected to come.

It’s not a big deal. Right?

“Is everyone in the Blades like that?” I ask. “I mean, Kori and Sora were both kind of like that.”

“Eh, although I can explain Sora, don’t take Kori’s attitude to heart.” Maeko immediately shrugs it off. “Unless she’s actually angry, but then you’ll know. I think she’s just been really stressed as of late.”

“Let’s change the subject,” Maeko says. When I look over at her again, she grins, placing her hands in her pants pockets. “From what I’ve heard, you’re from the Normal, right?”

“How different is the Normal compared to Destiny? I’ve never been, so maybe you can help me a bit.”

I think for a moment. Our voices are replaced by the sounds of the ground crunching beneath our boots. I cross my arms as I try to think about what to say about home. There’s so much, but so little to talk about.

“Well, for starters, we barely have any magic,” I begin to say. I reach up to tighten my ponytail a little. “None of our technology is assisted by magic, and probably over half of our world… doesn’t believe in Destiny.”

“I’ve always heard about that,” Maeko says, “but I guess it makes sense.”

I nod. “Mhm… The story of Destiny is usually told as a fairytale. You only really know the truth if your family is from Destiny, or you find out about it from someone else.” I put my hands in the pockets of my jacket. “It’s weird.”

“Does that mean part of your family is from Destiny?”

“Yeah, although my family is fairly small.” I say. “My mom and her parents are from Destiny. Grandparents are Written, Mom is not. They came over to the Normal when my mom was little, so they didn’t experience this whole Corruption fiasco. But believe me,” I shake my head, “Grandma was heartbroken when I told her what I knew.”

“Small family huh? Is it just you and your grandparents?”

I shake my head again. “Nah. I have my dad, too, but he’s not related to Destiny in any way. He doesn’t really understand the whole thing.”

Nor does he try…

“That’s interesting,” Maeko interrupts my thoughts before they spiral. “You seem to have a nice life. And a nice little family.”

“Heh… you wanna see a family? You should meet Nova’s folks sometime.” I smile. “She’s got four siblings.”

The two of us laugh a little as we near the cottage once again. I look at the HQ for the Blades, smiling a bit to myself.

Maeko isn’t too bad. Maybe we can get along.

After a bit of discovery, Ikimono has a small talk with Maeko... and starts to think about things. 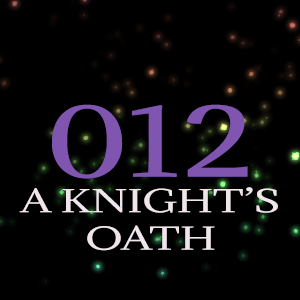