“Do you understand now?”

I watch as Atlas enters this void once again. I look around, still seeing nothing else around us. I watch as the man’s red eyes meet with mine. I purse my lip.

“If you’re talking about the argument with Sora, then yes. I get it, I can be harsh at times without realizing it.” I say.

Why is he here? Is it just to rub this all in my face?

No. Atlas wouldn’t do that… right?

“I think it’s time you come back to your roots, Iki.” Atlas says. “Maybe you need another reminder of who you were.”

“What the hell do you mean?”

Atlas chuckles. “It hasn’t been that long. I know you believe you’ve always been this stuck up and hard to touch, but… you once were like your friends.”

“Beginning of the school year, of course.”

Atlas disappears into the void around us. I yelp as I try to reach out for him. I look around to find myself alone. For some reason, I feel myself shaking ever so slightly.

The scene begins to form around me. I notice a room with small red lockers on the walls. There are a few benches around. My outfit has changed within my dream; I wear a black tank top and red shorts.

Is this my gym uniform?!

“Oh god, Marle,” A voice says behind me. “Do you wanna take a look at this? Some nerd just called my latest post ‘unnecessary’. Can you believe that?!”

I look to the side. A girl with dark skin and short hair in a half side bun looks at her phone. A young lady with red hair stands beside her, her arms crossed. She looks over the other girl’s shoulder.

“Ugh… they’re probably just jealous… They wished they looked as good as us.”

I roll my eyes. Cheerleaders. These are some of the girls on the squad at school. Pretty sure their names are Nadia and Marle. They’re the worst of them on that squad; always judgemental and willing to put others down without hesitation. It’s disgusting how cocky they are about everything.

“No offense,” I say, “You guys look like everyone else.” I put a hand on my hip. “You’re not royalty just because you can put others down.”

Both girls freeze. They look over at me. Nadia purses her lips as Marle balls her hands into fists. She’s the first one to turn to me while the other puts her phone in the pockets of her shorts.

“Ah!” Marle says. “The lone wolf has decided to speak!” She smirks. “You got a lot of nerve talking to two girls who can ruin your reputation within seconds.”

“Good thing I don’t have a reputation to ruin,” I shrug. “Try all you want, but I’m not scared of you.”

Nadia raises an eyebrow. “That’s a lot for someone with two eye colors to say…”

I gulp. I forgot. This took place in a time where I didn’t have the ability to hide my heterochromia. Both my purple and yellow eyes were visible. Even if I wanted to, I can’t change the color here.

It’s not in my memory.

I watch as Nadia turns to walk up to me. She stops just inches away from my face, narrowing her eyes as she grins.

“No… but what is bothersome is that your eyes are actually pretty like that…” She says. “And you’re a lone wolf. Kind of a waste of beauty, y’know?”

I narrow my eyes. “As if your beauty isn’t a waste when paired with your ugly personality.”

Marle and Nadia stop in their tracks. I look up at the door. A freshman with purple hair stands there, her eyes trained on the two cheerleaders with a glare.

“Ah! It’s the useless Winter!” Nadia claims. “Who knew you’d show up to defend a senior!”

The girls laugh as Nadia steps away from me. The two slowly approach her.

“Isn’t that a shame?” Marle says. “You really could be like your sister…”

“You wanna take this one?” Nadia asks as she looks at the red head.

“You’re right, Vi.” Marle says in a sarcastic voice. “You aren’t your sister. What a shame and a blessing. I mean, don’t get me wrong, everyone loves your sister… but no one loves you. You’re in her shadow. You’re an echo in her song.”

She begins to stroll up to Violet. The girl keeps her ground as she stares at the sophomore head-on. She doesn’t waiver one bit.

“Keep talking shit about my sister,” Violet says. “We’ll see where that gets you.”

“You mean the sister who wouldn’t care if you disappeared?”

Marle grabs the collar of Violet’s shirt. The freshman yelps as she’s forced into the other’s grasp. Nadia begins giggling. I see her pull out her phone and aim it at the younger girl.

“Yeah, pink eyes and purple hair… don’t you know these colors clash with one another?” Marle asks. “God, you are ugly! Look at how awful your hair is.”

Violet begins to shake. “Shut up!”

“How about you learn your place, you absolute mistake!”

Marle throws Violet to the ground. She lets out a cry as her back hits the floor. The two bullies start to laugh at one another as Marle walks to high-five Nadia. My lip curls.

I can’t believe they did this!

In seconds, I lash my arm out to smack Nadia’s phone. It falls to the ground. I hear it shatter as both sophomores gasp in horror. Nadia stares at me.

“How dare you!” She yells. “I made that case and paid for that phone myself!”

“You shouldn’t have been recording that.” I say. “She really didn’t do anything to you. You harmed her for no reason. I have every right to go tell the teacher what you brats just did.”

“As if she’d believe you,” Marle says, “She’s the cheer coach. She’s not gonna listen to a bunch of sorry loners like you.”

I stop myself. Honestly, she’s right. That teacher is known for taking the side of the cheerleaders, even if they don’t deserve it. I could just go to the principal, but what difference would that make?

But Violet got hurt…

“Ugh,” Nadia says as she picks up the pieces for her phone. “Let’s just go, Marle… we’re gonna be late to lunch.”

The bullies finally leave the room. I watch as Marle kicks Violet while she’s down. The freshman lets out a cry in pain. I scramble over to her side.

Violet looks at me. “Wh-what are you doing?” She starts to shake.

“Relax, I just want to help.” I respond quickly. “That was a hard fall you took. I want to make sure you’re not hurt.”

Violet quickly pushes me away. There isn’t a lot of force behind the attempt to shove me away from her, but it’s enough to get the message across. Her eyes fail to break away from mine as she tries to get up.

But why do I care? When this happened, I barely knew Amai’s sister. I only knew her because we were in the same gym class. We barely talked unless it was to work together. I don’t have any ties to her.

But she did try to help me just now.

“Marle dropped you pretty hard.” I say. “I want to make sure you’re alright.”

“Well I don’t need your help.”

Violet holds her arm as she finally gets up. Her lip is quivering as her eyes gloss over. Her eyebrows are furrowed.

“…Thanks for getting them to stop, though… I appreciate that.”

Everything starts to fade. I find myself alone again in the void. It’s dark.

I look to the side. Atlas is standing there. I purse my lips as I think.

What does that mean?

If he’s talking about Violet, then of course I recognize her. That’s why we’ve been coming to Destiny- she ran away and we need to bring her home. But there are more issues we’ve found because of Amai’s sister. But I don’t think he’s talking about her.

He’s talking about me.

I once stood up for that girl. I saw the bullying take place, and I stepped in. However, I didn’t continue to help because I was told to stand down. Even though I would still help Nova if she were in trouble…

I didn’t continue to help Violet.

“Find her again,” Atlas says. “That’s your next task.”

Oh. This took a difficult turn.

Ikimono is called to look into the past... and low and behold, she finds a hidden secret within herself. 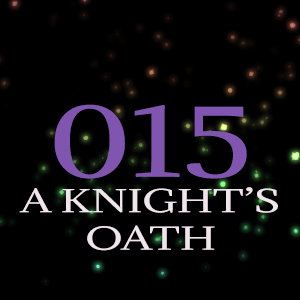