Ira kept falling deeper and deeper into the endless darkness. His eyes tightly closed and flailing with his arms, he tried to find something to hold onto. All of this seemed surreal and he didn’t know how to interpret it. He began to wonder: “Is this a dream? Where am I? Everything ... Is so terribly dark here. But it feels as if I’m falling and yet, there is no up nor down. Has something gone wrong? Am I going to die?” Ira’s thoughts formed words echoing through infinite space. They repeated themselves, becoming faster, more distorted. And with every doubtful thought presenting itself as a word, the speed with which Ira fell towards nothing increased.

“Will I be reborn? No ... For that, the parents would have to be present and I don’t know mine. So, what is left?”

I did not understand why Ira was convinced his parents would need to be present. However, he was right in one regard. He would not be reborn, rather, he was closing in on an irreversible end.

Ira tried to jerk free from the thoughts, which were competing in the background which one was darker. There was one thing that kept him from sliding down the spiral into the abyss: “I can’t let it end this way. That nag Mireska is waiting for me outside.” The first positive remark towards his situation faded away like lightly flickering candle light in a summer storm. Yet, even the smallest stone can make big waves. And so, a woman’s voice, unknown to Ira and yet somehow familiar, answered from within the darkness.

“Calm yourself. You can only slow your fall with inner calm. Be strong.”

Ira wriggled in the air, turned his head to all side, but his eyes still could see nothing but the blackness of the dark. “Who was that? Is somebody there? - No, I must be wrong.” Ira yet again gave the doubts an opportunity to take over his heart. “My imagination is playing tricks on me. But ... For Mireska’s sake, I should at least try. Calm down, Ira. Come on. I’ll just think of something nice. Mire-”

Ira didn’t get an opportunity to finish his last thought, as a sort of jetty built below him, and he landed on it ruggedly on his back. The remaining air, if one assumes souls can breathe, immediately got knocked out of him. He stared up. In pain, he began to realise his surroundings were slowly changing.

The small jetty was made of glass. And not any kind of glass. No, it shimmered with the colours of the rainbow. Around him, stars were dancing. They were the only thing lighting the darkness. When Ira straightened up, the room grew brighter. Gradually, mirrors appeared next to the jetty. Those mirrors on his left, showed a light case of “greening” and weren’t very clear. What did the mirrors mean? Ira took a step towards one of them.

“Is it true what they told me as a child? At the beginning of the ritual, one gets to look at nice and bad memories from one’s past. The old hag warned us of this.”

He stepped back and paused. “Some people have supposedly lost their lives because they got lost in their memories. My memories. My ... past.”

Ira hesitated, but then he looked further to his left and for a mirror with the oldest appearance.

I could understand his deeds. If one does not know one’s roots, how is one supposed to know oneself and how far one can go?

Finally. He fixed a mirror on the far end. A mirror, so yellowed, as if this past had taken place so long ago, Ira couldn’t have experienced it himself, had all the other mirrors not been clearer. When Ira touched it, the surface undulated like the surface of a pond that had been tapped with a finger. The mirror’s glass wrapped around Ira’s hand. He got pulled, piece by piece, deeper into the mirror. 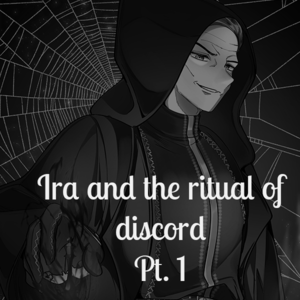