The first mirror - Rashka and Serion

“Put me down, put me down! I don’t want to go with you.” The voice belonged to a small, rather whiny boy, being carried by an older man in a dark coat.

The man paused and let the child fall like a sack of potatoes. He took two, no, three steps, before he turned around slowly with a dark, patronizing look.

“You want to tell me, you’re no longer useful to me, Rashka?” When he spoke the child’s name, it trembled. Ira could only watch. He wondered who the two humans were. He had met neither of them and this was his past, wasn’t it?

The child took up the courage to stand and brush the dirt off its skin. Accompanied by anger, and yet teary-eyed, the boy accused the man of something. Ira couldn’t understand all of it. “ ... And betrayed me. How am I supposed to ever trust you again?! You used me all this time, and my father ...”

“Your father, your father,” the man interrupted. “I’m your father now. You can call me by your doll’s name again, too. It was mine before anyway.”

Again, Serion interrupted him in a sarcastic, but impressive tone, which could have been the source of all hatred in the world. “Your best friend was made of cloth.” He laughed. “Now move. I don’t like to keep my clients waiting. After all, I have to prove, my undertaking was successful. Otherwise, my own passing could come sooner than planned.” «

He jumped the boy with a wild laugh, pulled out a knife. Ira screamed. He hoped, the boy would dodge. He wanted to tell him: “Stop! Run!” But his words didn’t leave his throat. He was helpless, just as helpless as the little boy before him. All he could do, was watch.

“Stretch out your hand.” Little Rashka shook his head and pulled his hands close to his body. But that did nothing against the strength of an adult trying to impose his will on a child of probably five moons. Serion pulled on the child’s arm and opened its hand. Ira didn’t want to look, assuming the man would cut the child, so it obeyed. It would have been better, had Ira’s imagination been true. It wasn’t simply a cut. Serion pulled back and rammed the knife into the boy’s palm up to the hilt. And as if that wasn’t enough, he turned it and slowly pulled it back and forth. With a dark look in his eyes and a smile that fed on the child’s pain, he whispered: “Will you come now, or ...” Serion paused. His gaze wandered to where Ira was standing as if he had noticed him. But that wasn’t possible. Maybe something behind him had happened, something the memory hadn’t preserved. Ira pricked up his ears when Serion turned back to the boy and continued his whispering.

But Ira was never supposed to hear the words, as he was banned from the memory from one second to the next.

After he had been thrown out of the mirror, he found himself back on the jetty. Immediately, Ira tried to return to the memory. In vain. The more he walked towards the mirror, the bigger the distance between them got. He had no other choice but to go on down the jetty ...

This is an additional chapter.
You dont need to read the chapter to grab the main story. 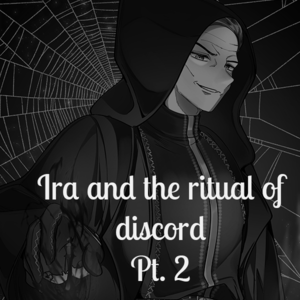