The Second Mirror - Kyle and the river

“What was that ... And what happened to the boy?” Ira scratched his forehead and stayed for a moment longer. Then he stretched and looked at the other mirrors close by, which he had ignored before.

“I think, the mirrors are connected to me. Which means, if I want to know who my parents were, I have to look into the mirrors, right?” Ira wondered. Again, he remembered the old hag’s words, that one could get lost in one’s own past. But he ignored them. Only the question which mirror he should take, remained. “Left, right, or the one in the middle.” Ira pondered and then he got an idea, only a young mind could come up with. He tapped the mirror on the left and alternated between the mirrors, followed by the words: “Eeny, miny, dragon’s tail, mule, donkey, bird of prey. Help me here today, and do it gladly, which mirror I shall clear away. Eeny, miny, shady shoe, the one announced, is you.” He repeated the rhyme until only the mirror he was satisfied with, was left. Ira closed in on the mirror, and before he could see anything, he heard his own youthful voice ...

“But I can’t swim,” his six moon old self said. Ira saw himself standing on a bridge, close to the village, stretching over a narrow river. He could barely remember this day. Or rather, he didn’t want to remember. Because he wasn’t alone on the bridge, three more children accompanied him. It was Kyle and his two best friends, Raphael and Luka. Kyle had been an asshole in young moons and his comrades did everything they could to reach his level. They didn’t want to become victims themselves.

“No wonder my papa always says: Tainted ones can’t swim,” young Kyle insisted and shrugged. “The Gods don’t want you to. And do you know why? My papa says, someday, a big flood will come and take you away. Then we’re finally rid of you.” Ira looked at his own reflection in the river and tried not to show any emotion. Contrary to the Ira watching all this unfold. He tried to encourage himself. He had apparently already forgotten, the last memory he had watched, nobody could hear him either.

Luka grabbed Kyle’s shoulder. “Kyle, don’t you think, you’re overreacting? I mean, I wouldn’t want to swim with him either.” He looked a little disgusted. “But he doesn’t have to drown. He can be useful, like, as a cattle farmer or something.”

Kyle shrugged off the hand on his shoulder and stared at his friend in horror. “Pah, now I see, how stupid you are. Do you want him to taint our cattle and for us to get infected, too? Don’t you remember what my papa said how the field they found in him looked? Black and everything was burnt.” He accompanied his words with big swings of his arms and repeated the adults’ words. “Ira, you’re tainted! Look closer into the water and at your reflection. The red scar across your face is proof, nobody wants you. Not even the wild ones dare come close to you. They are just as afraid as we are to touch your blood or your hair. Accept it and leave. It is disgusting.” 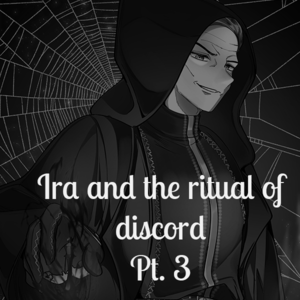