Ira knew how he had felt then, the words still hurt him today. Maybe more now than they had in that moment. He could watch his own hands tense up against the railing and his face twist in anger, but didn’t see a way to defend himself. He also knew, that had been the day he wanted to take up the courage to raise his voice against the others for the first time. But when he turned around, it happened.

He had to watch, again, how Kyle took his legs and lifted them to throw him over the railing into the river. He heard his younger self scream, because he hadn’t expected that. He watched himself drown. The stronger the emotions he felt within the memory, the more he got pulled out of the role of watcher and into his former self. He saw something out of the corner of his eyes that made his blood run cold. For a fraction of a moment, he could see the silhouette of a grown woman. Cassandra? Ira couldn’t finish his thought or watch the person, because now he was united with his former self. They both thrashed about for their lives, tried to keep their heads above water, and tasted the river’s salt before it blocked their windpipe. With aching chests, they both pleaded: “No, help me. Please. I can’t swim.”

But Kyle only grinned. “Say your goodbyes. We don’t want you here. Papa will be so proud of me. Come on, guys, let him learn how to swim on his own.”

Kyle’s friends didn’t move, too shocked by the view of Ira drowning. Raphael swallowed and tried to be open with Kyle: “But, Kyle, what if he really drowns?”

Kyle shrugged again. “That’s the point of all this. Now, come quickly, or do you really want to wait until the flood comes and takes him? Don’t make a fuss.” Luka and Raphael still hesitated, resulting in Kyle thinking how he could scare them. Then he got an idea. He picked up a couple of stones and put them in their hands. Then, he took a bigger one and stepped closer to the railing. “If you don’t want to go, make yourselves useful. We’ll make sure, he’ll be as unconscious as Mrs. Zanera’s piglet.” He laughed, and not quietly. Took two steps back to take a run-up. Sprinted forward, jumped up and threw the stone at Ira. He hit him at the temple, the same spot where Ira’s scar was. Raphael and Luka flinched when they saw the blood splatter and the river carry it downstream. They dropped their stones and ran, as fast as the could, back into the village. “Hm, cowards,” Kyle said with a last wink towards the river, before he ran off as well.

Ira couldn’t see anything. His last memory was the impact of the stone against his scar. The pain that came from it and the thought belonged to his younger self: Am I going to die? 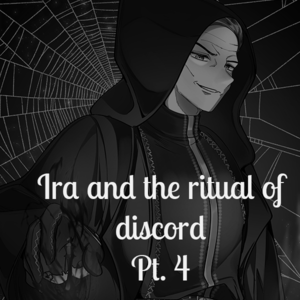