It was weeks after I met Gilbert, and he gave me a letter and an invitation for dinner tonight. He would not accept guests other than… me! I ne’er told my mother about it since my uncle told me to keep it a “secret”.

‘Twas quite unnerving that I will be going without companions other than my valet Mr. Montgomery and the coachman.

I arrived in a hall in Lancashire; and I was quite worried about my mother since she does not want to see her eldest son to be seen as lost. I met Gilbert again— he appears like a decent gentleman. He asked me if I was suitable to be Elinor’s husband, which I was not sure, but it may depend on my parents’ approval.

After dinner, I was shocked when he allowed me to sleep somewhere in this estate; but I must leave my coachman and my valet behind.

Upon wandering the walls in Astley, Gilbert taught me minuet in a position of…a lass! For such terrific nature of a man, why a lass’ position, rather than a lad’s position?

He should have taught me hitherto to dance minuet like a lad for his niece Miss O’Vile, yet he refused to answer reluctantly.

Gilbert taught me to become a lass than a gentleman. As the eldest son of an earl, ‘tis seen as giddy by the society! The eldest son should bear duties more of a gentleman than a lady, unless ‘tis their choice like Mother and Father.

I was questioned if I were either a lass or a lad or both or none, yet I refused to answer and went with “lad” upon fearing the society’s judgement.

‘Twas a week I have not arrived home; and my mother has been worrying about me. Gilbert read letters from my mother, Benjamin, his niece Elinor, and my uncle; and he called my mother “vague” and “disturbing” since He told me that I should be safe without her.

He did this to Peggy before they were married, rumoured that they were eloped in Venice, yet their marriage was not recognised by the Church of England ‘till 1803.

He does not want any unnecessary disturbance since Gilbert was writing a play which was dedicated to someone else.

Modelling the courtship of his wife huh, the vibes is strong on this one. 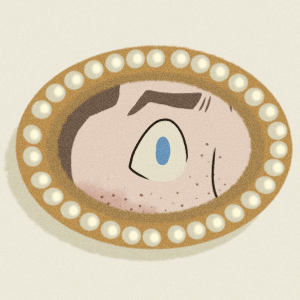