Gilbert brought a white kitten home named Hamlet. He found the kitten in an alley in London, 'twas fortunate how he was gentle towards that feline that nearly starved to death.

I have not touched a puss since I arrived home. I have several cats at home, taken care by maids and footmen. They are trained to catch mice, and they are used for comfort. I don't usually get a scratch from them unless I was in my nightwear, but they still scratched my breeches occasionally.

Returning to Penworth (for a Portrait)

Mother ordered me to return to Penworth for a portrait that she commissioned to Sir Campbell. I have met him again since I performed the play alongside Gilbert.

I had left Hamlet for Gilbert upon arriving to Penworth. I have a puss with black spots named Austen, after a well-known family. Similarly, to Bowie, a puss within a blueish shade of grey.

The portrait of mine might be contrasting, judging the colours of the great hall.

Upon looking the letter in the portrait, it was labelled as “My Love”. Not quite unpredictable for a man like Sir Campbell; Gilbert gossiped much about me to Sir Campbell and anyone he knew in society, mostly how I looked similar to his deceased wife.

I was sent back home again, yet both Mother and Uncle Charles stayed in London. I reunited with my younger brother Alexander, but I encountered a strange and familiar silhouette.

Patrick warned me about Sir Edward after a sight of the ring. 'Twas made after Grace's death, to keep her few locks of hair, but I explained that Sir Edward was lying just to poison the Marquess.

He explained that Sir Edward wanted Grace, just to inherit the Marquess' wealth. Instead, the Marquess chose Patrick over Sir Edward due to their mutual trust and affection, which Sir Edward doesn't have.

Sir Edward ended up married to Grace's younger sister, Lady Amelia. It did not end well when Amelia discovered that her husband killed her father.

After coming back to Barkham, Gilbert caught a cold after we were lying under a tree. 'Tis been twice since he caught another horrible cold during our stay in London.

I told the older housemaid to take care of Gilbert's concerning health. She doth not seem to be concerned since it happened to Gilbert twice each winter season.

After commissioning the Marchioness for a lovers' eye dedicated for me and Gilbert, I met Lady Dominique de Guerre holding a book about admiring someone's mother. She'd been seeking for Michelle, an elderly tortoiseshell puss. Michelle was clinging towards me like how Hamlet did to me.

I stayed 'till the Marchioness allowed me to read books in the library, thus making Gilbert disappointed if I did not read Iliad or Odyssey or anything related to Greek Literature or Mythology. Unlike Greek and Roman history and mythologies, Medieval history is something that Gilbert ne'er showed fondness of.

Gilbert showed no interest in "obscure" history and literature. He preferred Shakespeare and Greeks and Romans. He met Peggy during his stay in Venice 'till 1801 when they came back to England.

Not the Breaking Bad reference in this painting 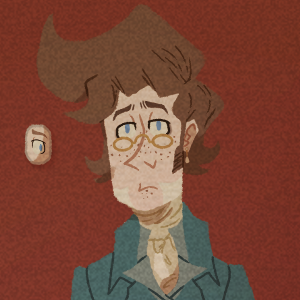