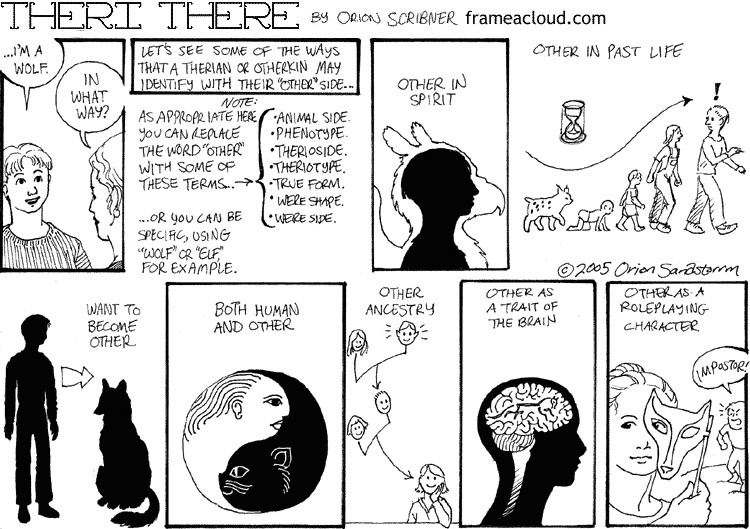 Theri There page from 2005-10-24. Transcript:
Someone says, “I’m a wolf.” Their friend asks, “In what way?”
Let’s see some of the ways that a therian or otherkin may identify with their “other” side.
Note: as appropriate here, you can replace the word “other” with some of these terms:
Animal side
Phenotype
Therioside
Theriotype
True form
Were shape
Were side
Or you can be specific, using “wolf” or “elf,” for example.
Other in spirit. [Someone’s profile in silhouette, with a gryphon-shaped outline around it.]
Other in past life. [Someone looking back at how they grew up, surprised to see a lynx in their memories from before their infancy.]
Want to become other. [A person and a wolf.]
Both human and other. [A yin-yang symbol, with a human face in the yang, and a cat face in the yin.]
Other ancestry. [Someone’s family tree that traces back to an elf.]
Other as a trait of the brain. [A brain with its folds forming a shape like that of the White Mare of Uffington, a 370-foot design etched on a British hillside in the first century BCE.]
Other as a roleplaying character. [A person lifts aside a fox mask, as an onlooker exclaims, “Impostor!”] 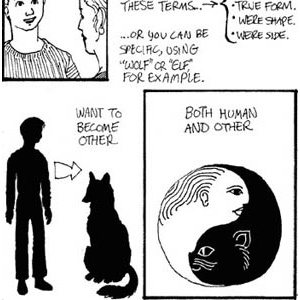