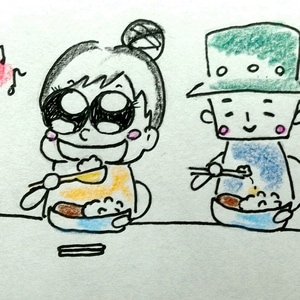 Momo is from Japan, Starr is from South Africa. Together they are MomoStarr, the travelling duo, bringing us stories of ramen, stories of adventures, stories from near and far.

Momo is the artist, creating hand drawings in her distinct style. Starr is the writer, conjuring up stories from real events with fiction sprinkled in between.

Here is a little background on the process we follow when creating our comics.

* Momo hand-draws each comic on paper and then takes photos of each frame with her phone's camera.

* She then emails the pictures to Starr, along with the text which is to appear in each frame.

* Starr then does his magic, rearranging the words, adding and removing some in the process.

* Afterwards, he emails the new text back to Momo, who then adds them to the pictures with an app on her phone.

* Once Momo is happy with what her work, she sends them back to Starr who then uploads the new comic to Tapstic and to the comic's website, https://momostarrcomics.wordpress.com/.

* Starr posts the news of the new episode to various social media network, which you then get, read, enjoy, like and share.
Reply  to conversation

Hello Tapastic friends! Let us know what you think of the comics! We would love to hear from you.
Reply  to conversation