Howdy, I'm Chiral, the writer of Rising Shards! I have a creative writing degree and I worked at a children's book publisher, and am currently a freelance editor, and of course writing on here :)

Indesign,word, and if I'm being honest MS paint and 3rd party ms paint equivalents on mac

Hey all! With Tapas' new policy on AI content, I've had to pull the goof bot anniversary special chapters. With the way AI's gone/going in relation to art I was getting increasingly uncomfortable with the chapters anyways so I fully support Tapas' decision. The only bummer for me is losing the hilarious comments some of y'all made on the first one but I made sure to save them. Sorry for any confusion or anything this may cause (there are only two of them and they're nonsensical weird bonus chapters so I hope this doesn't upset anyone losing them lol), and thank you so much for reading! :)
—Chiral
Reply  to conversation

Merry Christmas and happy holidays!! For this year's bonus Christmas content, I have two extra Evy & Stella chapters (as their story together had its big start as last year's RS holiday special, so it felt right) releasing today and tomorrow and a bonus fluffy Rising Shards chapter coming tomorrow. I hope you enjoy!
—Chiral
Reply  to conversation

I made a really long year in review post for my writing this year that may or may not be entirely coherent but it's too long for the update thing so if you're interested:

There's a few hours of Inksgiving left if you'd like/are able to donate, thank you so much to all who have donated so far! 🥰✨
Reply  to conversation

I've been meaning to get around to this for a bit, here's a link to a big info doc for Rising Shards featuring a character guide and links to all the episodes!

I've tried to make it as spoiler free as possible (the character guide is mostly pulled from the Season 1-2 interlude bonus episode but with spoilery stuff taken out). With the length a web novel gets, I wanted an easier way to jump around to various episodes as well so I hope this helps there! It'll help me at least when I wanna reread a specific episode hahaha. As a bonus, I have episode titles listed a few ahead if anyone's curious about some sneak peaks. I'd like to keep this updated with new characters as well as getting world lore/info in this as well. Now to steadily add the link into the episode descriptions which will hopefully help new and old readers!

Rising Shards: Stella & Evy is out now! There will be two mini chapters and two full chapters this week, then following that new chapters will be posted on Wednesdays. I really hope you enjoy, I'm super nervous about it because it's a new series, it's more mature and ~spicy~, I couldn't afford new cover art so I just made something on Canva (hopefully I can get some dough to get a nicer cover soon but I wanted some new character art for the main series first) and it's something people have been asking for, more Dr. Diast and Stella finally! Thank you to everyone who pushed me to write this series, and everyone who wanted to see more of the two! I hope you enjoy! 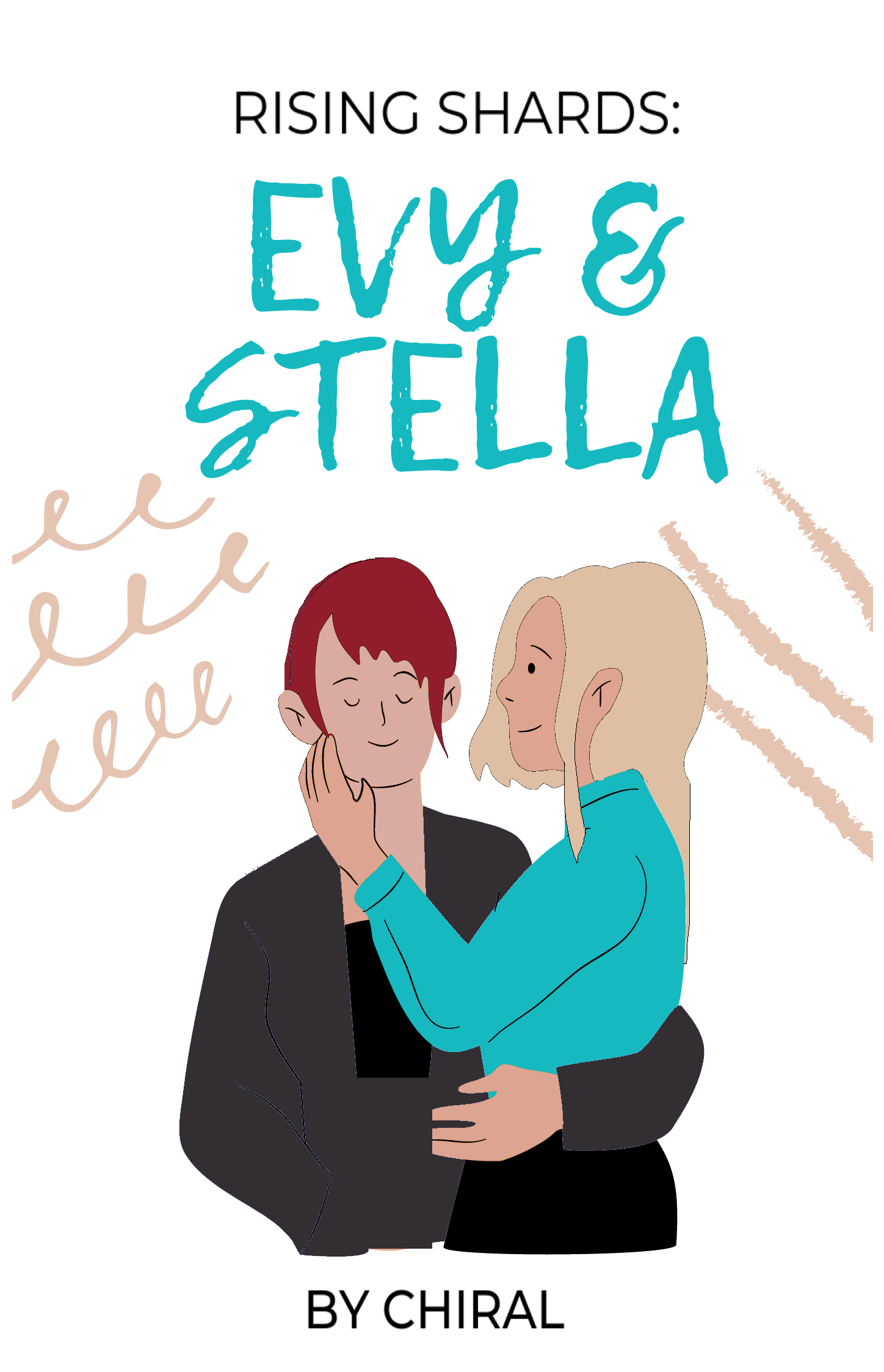 The Lackadaisy team is doing a drawing request stream fundraiser rn so naturally I asked for an OC doodle, last time I tuned into one I requested a cat Zeta in their style so this time I had to ask for a cat Oka 🥰 AND THEY BOTH TURNED OUT SO NICE LOOKING AAAHH

Check out the stream here and donate if you can! :)
https://www.youtube.com/watch?v=SLleZ1ayoDk 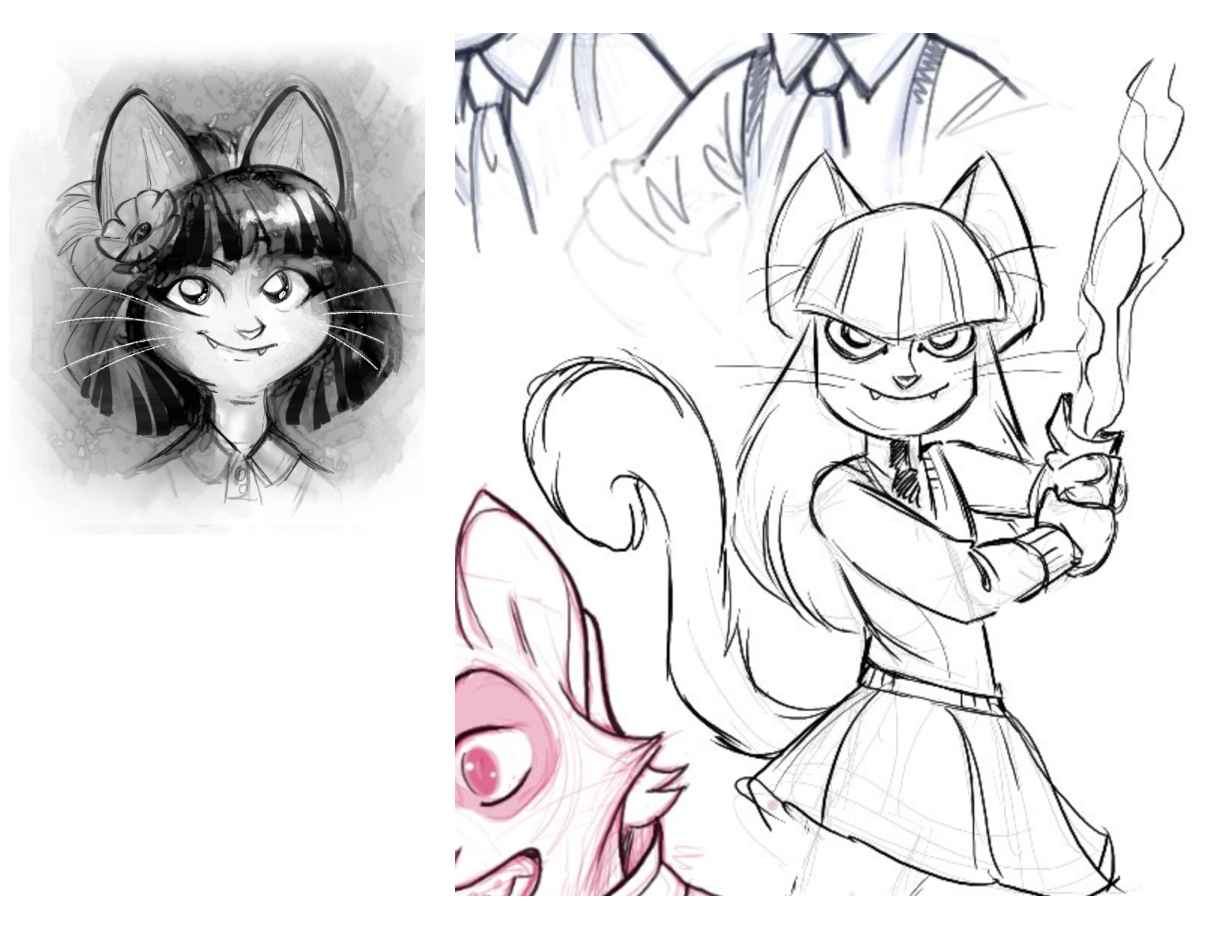 Happy 2 year anniversary to Rising Shards! Thank you so much to my readers/subscribers/commenters/everybody for making this such a great experience, I'm incredibly grateful for all of you! 🥰 Thank you to the Tapas team as well for all the features and such the last few years! ✨ Also a special shoutout to flopicas as well for the wonderful artwork, I can't see RS working half as well without it!

I remember telling myself before launching it that if I got like 10 subs I'd be happy with a longterm goal of having people theorizing and shipping. And now RS is at over 1000 subs and closing in on 100k views!

I'm also proud of myself for having a project like this that I can really put my heart and soul into. I've mentioned before but I tried for a long time to turn this into something for tradpub, but what I really wanted out of it I could only get by launching it as a web novel. It's still a long term goal to get it published in print, and day by day I hope I'm getting there.

So thanks again to everyone for a wonderful two years, and I hope you join me in looking forward to what's next. 😊
—Chiral 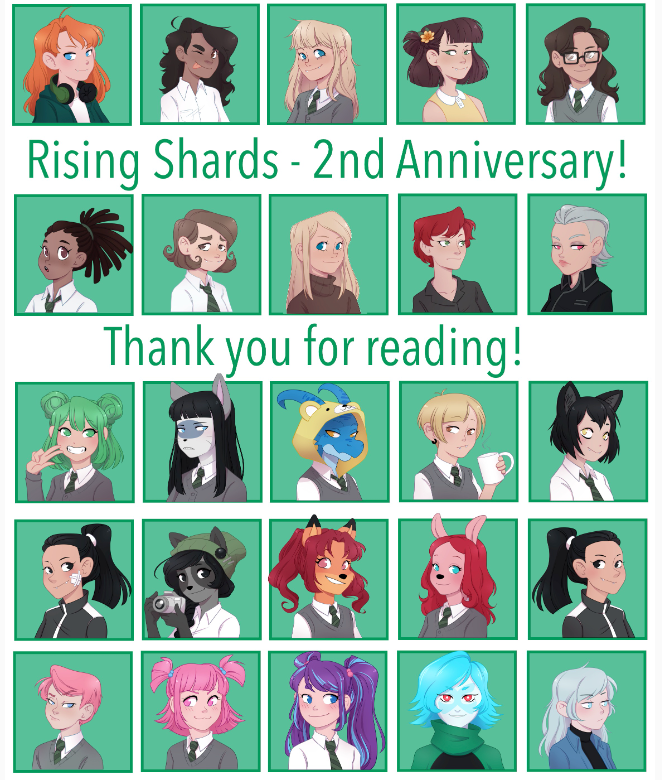 Tomorrow is the TWO YEAR anniversary of Rising Shards!! Just a heads up that there's gonna be a bundle of chapters for the anniversary so brace your notifications accordingly lol

As with last year (I'm so excited to have traditional things to do already!), there will be:
-An excerpt from an old draft
-A character Q&A
-A chapter written by a bot

And that's in addition to a regular chapter so it'll be a big day! Aaaand then a lil announcement at the end of the anniversary stuff that I think longtime readers will be very happy about 😊 (I'll announce it on here as well for those not caught up to the latest chapter of course!).

I also finally FINALLYYYYY got enough money aside to order some new character art so get excited for that!!

Thank you all for reading, whether you're just starting now, if you binge read the whole series in a week, if you've been reading all along, wherever. Really, to all of you: THANK YOU!

I set the wrong time for today's chapter so apologies for the inconsistency / enjoy the early update! If you prefer chapters going up earlier than 3PM CST let me know and I can adjust my schedule! :)
—Chiral
Reply  to conversation