Ballad of Silence and Wings

The wind was especially cold that night. It howled through the trees and the grass stalks, stirring the otherwise abandoned garden. Empty branches creaked, and dead leaves scattered in the air before winding through the open palace door.

Two cloaked figures rushed to the entrance, closing the door behind them. At once the howling stopped, and they were met with silence. Darkness shrouded the barren structure within, broken only by moonlight spilling from the windows.

The travelers walked further inside, inspecting their surroundings, until they reached a vast hall.

Years of neglect had been unkind to the palace; cobwebs invaded every corner, the wooden furniture rotted away, paints and colors of what had once been the magnificent throne room had diminished into mere shadows of their former glorious days.

"Do we stay here for the night, Princess?"

The Princess seemed to ignore the question as she explored the room. She let her fingers brush against the faded canopies, the curtains and table cloths, the sculpted pieces and golden plates, until she came before the throne.

Long deserted by its king and his people, the throne stood out as a lonesome, yet enduring, presence over the aging wilderness that is its hall. Placing a hand over her heart, the Princess bowed her head towards the throne, to pay her respects to the fallen king. She resumed her walk around the room, engraving the scene on her mind.

"I'll prepare our sleeping quarters, then." Her male companion bowed before leaving her to her thoughts.

In the earliest years of her life, the Princess had been a part of this palace. And yet, the memories that had fled out of her reach would still not greet her here. Ever as elusive, their absence made the place feel distant to her, ridding it of any sentimentality, that the refuge differed not from any other they could have chanced upon.

At length she found her companion in a small room, lying cozily on the floor with his hands under his head. Her bedroll had already been laid out for her, on a space that looked less filthy than the other parts of the room. Right then, she knew he had cleaned it for her comfort.

Kneeling down and settling her gold glaive by her side, she proceeded to undress, mindful of the dark that hid her bare form from the man. Even if it didn't, she was confident he would never disrespect her so.

The Princess took off the bandages that flattened her chest. She also removed the one around her head, revealing on her brow the golden cross that marked her as a direct royal descendant of the kingdom.

Having ridden herself of the troublesome bandage, she ruffled her short raven-black hair, relief washing over her as she did. Her hair used to be long, but she had cut it short to pass as a boy and had bound her breasts for the same reason. Though a bit reluctant, her companion had agreed her face would attract less attention this way.

"Were you able to remember anything from your past here?" the man asked. He could just make out her silhouette when she shook her head in response. It had been eleven years since the Princess had last been at the palace. She had only been a little girl, when the palace had lost to the Sorceress Queen.

Pleasant memories with her father and brothers were then nothing more than a blur. Her sorrow over their deaths, as well as the downfall of her kingdom, had drowned those memories, and the surging desire for revenge had swept most of it. The Princess had been nurturing this hate, letting it consume her.

The Queen reigned in her departed father's stead, in a mountain fortress she had built entirely of glass. That was to be their destination.

After putting her clothes back on, the Princess picked up her glaive and approached the man. There she laid down her weapon and sat by his side, folding her legs underneath her.

The torn curtains allowed a few patches of moonlight through the windows, causing them to land across the room at random. The silver blades of the man's twin scimitars, which lay by his feet, glinted from the light, as did tufts of his silver-white hair.

Sighing, the man sat up to face her. "It's a good night for dreaming. Are you sure you want to hear this tonight?"

Expectant, the Princess remained still and closed her eyes.

The man started recounting the events of when that very palace had been conquered by the sorceress. The king had fought at the gates to let his children escape, perishing that same day.

"Before the enemy soldiers could catch up to you, two of your eldest brothers stayed behind to fight them, buying you and your other brothers more time to flee.

"Your third brother also separated from you, in order to lure your pursuers away.

"When the army soldiers closed in on you and your brothers again, your fourth and fifth brothers stayed behind, entrusting you to your sixth and last brother. They defeated the soldiers and cast a barrier in that passageway, that none may get past them.

"I destroyed this barrier, left your brothers to the other troops and gave chase." He remembered that day very well. At that time, despite being only seventeen years of age, he had already been a full-fledged duelist.

"I caught up with your sixth brother, and we fought. In the short fight that ensued, I slashed off his left arm."

At this, the Princess opened her eyes. She and her sixth brother had not been far apart in age, and he had been the closest to her. They were almost like twins, as they used to playfully claim to their fourth and fifth brothers – the true twins of the family.

It was a memory she was able to retain, and this part of the recollection always awoke a pang of longing within her, though fleeting.

In the softened darkness, she could still quite perceive her companion's eyes – those eyes that saw her, the only eyes that knew her – as their gaze sought to break through her resolve.

"You suddenly appeared before I could strike your brother down. You were only a small girl, then. You came out from behind some barrels where your sixth brother must had hidden you. Your brother, as he lay there bleeding to his death, pleaded with me. He begged me to spare you.

"The Queen knew of the king's six sons, but she had no mention of a seventh child, His Majesty's only daughter. By the golden cross on your forehead, I understood right away.

"I decided I would end your life quickly. I walked towards you, and you stood there holding your ground, unafraid.

"It was then I hesitated. I could not find it in myself to slay you.

"I sheathed my weapons, bore you into my arms and took you far from this palace, this kingdom, away from the Queen's infinite wrath.

"And yet here we are, back in the Queen's clutches." The man shifted, bringing himself closer to the Princess.

"I am certain that when your six brothers gave up their lives, avenging them was not the future they had in mind for you."

The Princess took her glaive and returned to her side of the room. She lay facing her companion, aware that his eyes were still upon her. A moment of silence followed before he spoke again.

"You know I will follow you to the ends of the world if only to protect you, and not just from harm." His voice went quieter. "You know I will face any peril and fight any foe, even my own mother, for my heart is truly yours and yours alone."

The Princess looked away. To defeat the Queen, she would have to deny her heart of everything else and not be swayed by anything other than her hatred. To watch the Sorceress Queen bleed and burn, no other vision satisfied her more. Her heart must not falter for even an instant. Even he must understand this.

The heart is weak, she would say. He could almost hear her say those words. It had been years since the Princess had last spoken, but the sound of her voice was still vivid in his mind.

"My only wish for now is to hear you speak again."

The Princess peered back at the man. The vivid color of his eyes marked him as a caster, but instead it reminded her of mulberries. She hoped she could pick some the next day.

The Caster knew her all too well as he felt her stare. "I shall get those mulberries for you tomorrow, Princess."

The Princess sighed with contentment and turned the other way.

At dawn they headed out of the ruined palace. Not needing to disguise themselves as merchants anymore, they left their cart and many of their belongings behind.

"We can now travel lightly to the Glass Mountain," said the Caster. The Princess need not pose as a boy or conceal her cross any longer.

"We are within the Queen's territory, so it is unlikely we will encounter infantrymen from here on out. She knows I'm coming, and I do not doubt she knows who you are and that I am with you."

As they were about to leave, the Caster glimpsed a gold ring hanging from the Princess's neck by a chain. He raised an eyebrow at her, to which she turned her head in the direction of the palace as a reply. He nodded, understanding that she had found it within and had chosen to keep it as her memento.

The Caster spoke as they made their way. "The glass fortress is guarded by three of the Queen's circle: the Flame Contessa, the Shadow Duke and the Star Children. They are not of the human realm and therefore, will not go down easily.

"Because I am of the Queen's blood, the Star Children will lead us straight into her citadel. That is, once we make it past the former two."

By midday, the Flame Contessa's manor was in sight, its top floors rising over the trees as they neared it. Beyond the woods, the Red Hall stood in a wide clearing.

Holding her memento, the Princess thought of the palace and of the years spent in preparation and in silence. She nodded to the Caster. They would not wait any further. She was ready.

All had come down to this day. In truth, she almost could not wait for the first taste of battle. 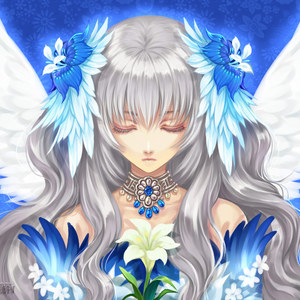 A great start to what looks like a wonderful story 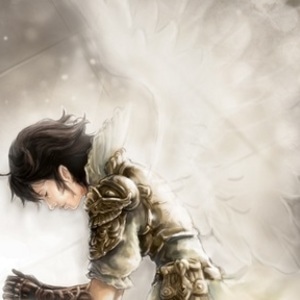 Ballad of Silence and Wings

A silence to keep and a wicked queen to defeat.

An exiled princess returns to her kingdom, bent on slaying the immortal sorceress, the Queen in the Glass Mountain. By her side is the Caster, guide and protector. Perils await them on their quest, and will test not only their strength but their hearts as well.

Yet how will such thirst for vengeance serve the Princess, if not to lead to her own ruin?

Follow the story of the silent Princess, from the fairy tales "Seven Ravens" and "Six Swans", retold as one of grief and hatred, of lost dreams, and above all, of how love can emerge from even the darkest of places. 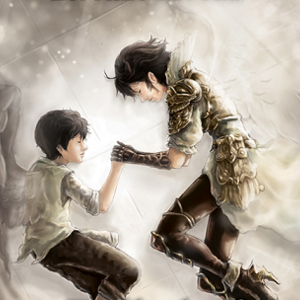