Joe was sixteen, his father was a mechanic for a major local racer and would bring him along to see how things were done. He had been in the racing scene since he was a boy and had learned of quite a few common faces. He knew many small time racers and even some blue line winners. His father was reluctant to bring him to yellow line races and only did so twice but redline? Never. They would watch the race as a live-cast on their ship. They traveled a lot and so his father had decided to purchase a small ship to serve as their home as they drove from planet to planet.

However there were not so famous faces, one would even say infamous. They were a pair of kids around his age. There they were again, James and Frisbee. Their smiled were big, and the fire of their dreams shone brightly even from so far away. How did they ever get around security in the first place? His eyes widened when he realized just where the pair were standing and what was next to them. How did they get past the security and sneak into the race!? He glanced at his father who was getting his tools ready for the moment his racer drove into the pit stop. He was hyper-focused and wouldn't notice James and Frisbee.

The beat up machine that James and Frisbee had brought up to the starting line looked a lot like the sleepers that showed up from time to time. It sounded horrible. He couldn't look. But he had to. He covered his eyes with both hands and separated his fingers just enough to see. He started to tug on his short horns, this was stressful! The sound of their motor! The screaming of the wheel bearings! That thing was falling apart as they drove and turned the corners. He knew it, he just knew it. They would crash and if they didn't the pair would be found and chased out as soon as they crossed the finish line.

But right now everything was on the race, most of the race machines glided around the turns gracefully. Others ripped through the air on their wings like metal angels. The sunlight gleaming off their sheet metal bodies. The air was hot nd the smells of burnt rubber and nitro filled the air. The screech of tires and roar of both ground and anti-grav engines on occasion overtook the cheering crowd. It was a fantastic mix of technology all aiming for one goal. To come in first.

The beat up race machine that belonged to the infamous duo came in fourth and as they slowed a crowd of security guards rushed in to chase them off of the track, making them leave their machine behind. Joe heard their laughs,

"Haha, Run Frisbee! Run faster! They're gonna get you if you’re too slow!" James shouted to his friend as he ran and leapt over the barriers meant to keep the crowds in line. The skin of his face and neck glistened with sweat. Joe could see the dampness on his shirt's chest and knew that it must have been an oven in that thing.

"James! Pull me along!" Frisbee held out his hands, wiggling his fingers as if that would help him reach further. He too was laughing from the lingering exhilaration of the race. He fumbled over the barriers but James always came back to help him get back onto his feet.

Later that night, after James and Frisbee had been run out of the race stadium, Joe asked his father to have a look around. The boys were sitting outside and were nothing but smiles, shining so bright. He could hear them talking about their machine on the other side of the barrier-fence. Their machine had been hauled out and occasionally creaked as the metal cooled. He heard their favorite parts of the race.

James made large gestures with his arms while Frisbee was more reserved in his movements. It didn't mean he wasn't just as engrossed in their conversation.

He felt his face burn as his eyes fell on James's smile. He wanted to talk to the other boys so badly but he stayed away on his side of the barrier-fence. Maybe he would feel up to it next time. 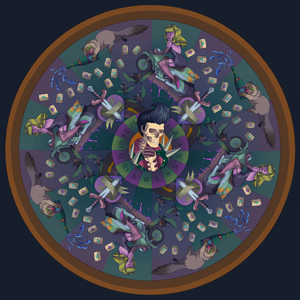 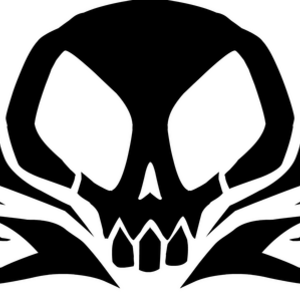 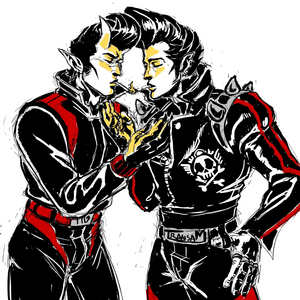