What make them different from humans are that angels and devils have powers, they are immortal, and they have wings on their back. Black wings for the devils and white wings for the angels. They can easily hide their wings when they want to blend in with the humans during their mission.

The other way to differentiate angels and devils is by looking at their eye colour. Angels have blue eyes while devils have red eyes.

The devils can control humans' desires and lust while the angels can control the humans' feelings of love. They works together as cupids for the human beings. Like in the human world, devils and angels have their ranks too. Children of angels and devils will have F rank and their rank will go up as they get old. The highest rank is S rank. S rank has the authority to give out order, they can work alone and they have the freedom to go to the human world anytime they want. Children of angels and devils will have mission to make the human children to experience first love and as the ranks go up, their missions will get harder.

Despite there are uncountable numbers of angels and devils, there are only few that are S rank. Their looks, voices and names are all unknown even to the A ranks. You can say that A rank is the highest rank of any angels or devils can have because S rank is very impossible to get.

The deuteragonist of this story is Jay the A rank handsome devil. Like always, he would wait for El the A rank beautiful angel. It has been 2 hours since El told him to wait for her. He keeps on looking at his watch while waiting for El. He is afraid that they would be late for their mission. When he finally sees El from afar, he smiles so brightly because he is glad to see her.

That is one of his weaknesses. Whatever he is feeling, he clearly shows it on his face. If he is happy, he smiles widely. Every expression and actions he does clearly show how he is feeling. That is why El always make fun of him because she finds him cute.

"Jay!" El goes to hug Jay just to make him blush and just like she expects, Jay blush so hard to point that El can see that Jay's ears turning red. Jay really cannot hide his feelings. His ears always turn red whenever he is blush. Everyone will always make fun of him because of that especially his partner, El , the beautiful angel.

"Can you stop hug me like that." Jay quickly but gently pushes El away from him.

"But I really like you. That is why I hug you like this." El gives a sudden hug again.

"Stop it, El. You don't have to tease me every single time. I know I can't handle my power really well and because you're a prodigy, you always tease me for being a failure." Jay again pushes El gently. "And because I cannot hide my feelings really well makes it worse."

Jay quickly hide his red ears with both of his hands as soon as she told him that. "Again? You mean-"

"Yes, your ears turned red when I hugged you just now." El cut his words before he even finish talking.

"You should told me that earlier!"

"It's cute to see you like that." El giggles.

"That's enough of teasing. I'm leaving you, El." Jay quickly walks away from El. He cannot stand being the victim of El's teasing. El quickly follows him from the back.

"You're always like that. You don't have to tease me everyday." His walking pace becomes quicker. "Even now, I can hear you giggle behind me."

Jay spreads out his black wings and fly to the human world.

"Jay, come on! Wait for me. You know you can't go there without your partner." El quickly spreads out her white wings and follows Jay to the human world.

"So,what is our mission today?" El asks Jay who is currently reading his mission notebook. Since Jay is so into reading his notebook, he ignores El's question. That makes El a little bit irritated. She does not like being ignored.

El has always been a popular one. She is so beautiful that every eyes of the celestial beings always look at her. Being a prodigy makes her the talk of every celestial beings. She is always being the attention of everyone so being ignore by someone makes her uncomfortable.

But another reason why she is popular is that no one really knows anything about her. Being beautiful and prodigy is all they know. She is the flower that one only dare to look at. El has this mysterious aura around her. But for some reasons, she does not give out mysterious aura when she is around Jay.

It makes Jay sometimes wonders why other devils and angels describe El differently than what he sees in El. El is just another mischievous angel who is always teasing him.

"Hey Jay! I'm talking to you right now. Are you even listening?"

"Yeah. This woman and her future husband might not proceed their wedding." Jay points to the woman that is trying her wedding dress.

"Despite her wedding day is nearing, she is having her doubts. It's usually men that always having his doubts. Well, marriage is the grave for men. HAHAHA" El laughs aloud.

"Please stop with your jokes, El."

"Okay okay. I stop. I'll go help that woman. You go talk with her future husband." El then leave Jay without even waiting for him to reply.

"Am I just your servant? At least wait for my reply. Oh, well. Let's hear the future husband's desire."

For them to complete the mission, they must create situations for the humans to finally feel love. However, after they finish their tasks, their powers on the humans are not permanent.

"Having a second thought?" El approaches her target, the young woman who is just finish trying her wedding dress. The young woman looks very surprised to see El in the same room as hers.

"Who are you? How did you get here? I don't think you are one of the workers here." The young woman slowly moves her hand to the nearest vase, hoping to use it as a weapon if El will suddenly attacks her.

"I'm just your cupid that is here to help you. As I suspected, you don't look that happy even though you are getting married in the near future. "

"Yes, I'm just a cupid. Nothing more than that. I'm here to help you. So move away from the vase and let's have a talk. Shall we?" El smiles to give hint that she is not there to harm her. The young woman put down the vase as she feels like El is not going to hurt her.

"How nice of El. She can easily convince the woman and here I am with a man is currently frighten of me when I'm have not do anything yet." Jay sighs as he tries to convince the husband-to-be to have a talk with him. For how Jay knows what was going on at the other side is because they can see what's happening on each other's side so that if one of them fail and unable to continue the task, the other one must also stop and return to the celestial world. They can also have a conversation via telepathy.

"Jay, my dear. That's probably because you haven't hide your wings yet." El laughs aloud. Seeing El talks and laughs to herself makes the bride-to-be thinks that El is crazy. "Oh no, don't look at me with disgust. I'm really a cupid. See." El shows her wings. "And I'm was not talking to myself just now. I'm was talking to my partner." 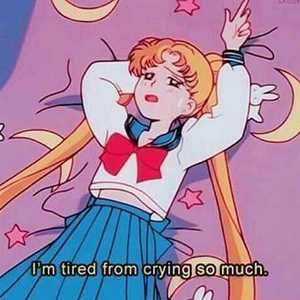 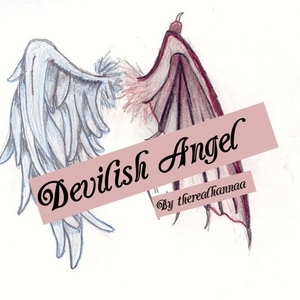 In a world where the angels and devils work together to become the cupids for human.

Jay is a handsome but shy devil that cannot control his power. Very innocent and dense that even the other angels and devils say that he should be born as an angel.

El is the most beautiful of all angels. A prodigy but very mischievous that loves to prank on Jay. Though very playful, she has mysterious aura around her and has a lot of secrets. 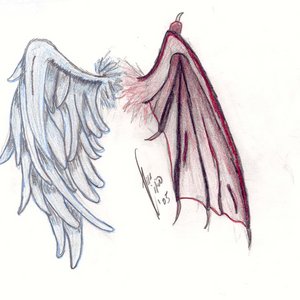