That's how I keep calling them. Even though they're a next-gen line of androids - with their visible joints, limited facial expressions and lifeless eyes, they're nothing more than dolls to me.

They were sent a couple of days ago to the company where I work at. I'm a security guard there, and I was not pleased to hear that I'll have to cooperate with them.

The company is a part of some project, taking the android prototypes in to test their abilities in performing their job properly. Or something... So the dolls I'm working with are going to be professional security guards once they pass their tests. In which it's very possible that in the near future my presence there will be obsolete enough to fire me.

I can understand why - they require no pay nor basic human needs. All you need to do is charge them, and they can go on for days. They're obedient and economical.

So you can imagine why I wasn't fond of teaming up with those damn things.

Four of them were assigned to my department, and being around them was just plain awkward. They don't speak. They don't show any emotion. They're completely focused on their job. Observing, listening, calculating.

Like a hunting animal... no, even less than that. Just a bunch of walking computers.

I wonder why their creators even bothered to give them a humanoid form, since there's nothing human about them anyway. A water dispenser attached to a tripod would work just as fine. "Mobility and presentable appearance" they say. Whatever. I still feel creeped out. Their eyes may seem lifeless, but their stare is intense...

Like right now, the little dude beside me. Yes, exactly. Only barely reaching to my shoulder. You'd think they're some kind of intimidating robocop-ripoffs, but no. With their small bodies and weird stylized hair and clothes, they'd pass as some anime protagonists. Seriously. Compared to them, my grumpy face makes me seem like a villain.

At least the one I'm with right now has a color palette that suits my tastes. Black hair, black bodysuit with red lines. Only the porcelain white skin and black irises feel so unnatural.

I glance at him. The eyes fixed at one point, the back straight, the pose motionless.

The doll nods and doesn't even turn around - it just leaps back and disappears in the dark corridor without a sound. Just like a damn ninja. I feel a bit sorry for those who will ever try to break in. The dolls can sneak up on them like ghosts, and incapacitate within seconds.

No warning, no mercy.

I light my cigarette and exhale the smoke with a loud sigh.

I want this trial period to be over already.

This seems very interesting I wonder what you're planning for this :D 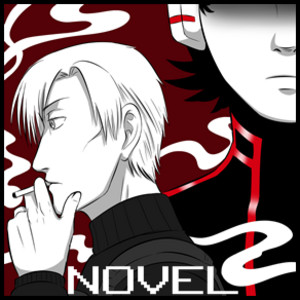 Wilhelm has a bad feeling about the androids that were assigned to his department.
There's something shady about them...
Subscribe 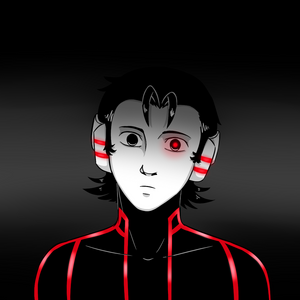