In a big cave of the huge Kaish mountain known as the gate of dragon kingdom, was a young alone sixteen-year-old girl sitting on an altar with tons of different fruits, sweets, jewelry, and raw gold bars in the 100m x 100m cave all alone in the dark with a few fire torches lighting the cave.

'Why the hell was I selected for this stupid ceremony? Aaah!! I don't want to get eaten by a dragon, I have my own dreams and goals to complete.'

'I'm sure Rishi fueled my father to put me in this situation, Why did even father agreed to this shit, I bet he must have at least received 1000 gold coins from the royal family.'

Rishi is Kavya's older sister. She hates kavya because of her zero talent in magic.

'If the dragon doesn't eat me I will definitely tell him I am not a royal, If I'm going down I will at least take one down with me.'

The Kailash Kingdom has a ceremony in which every 100 years a young girl must be sacrificed from the royal bloodline to keep their kingdom safe from demon creatures who were destroyed by dragons in return. But the royals, don't want their beloved daughters to end up dead so they selected 16-year-old, Kavya Aishwan from the fallen Aishwan family, though they have a noble title, the average annual income of the Aishwan family is even comparable to the family of a commoner, so the royal family decided to fend off the Aishwan families daughter in exchange for thousand gold coins and a Baron position for the family head. As the youngest daughter with no magic talent kavya was the perfect sacrifice as she was deemed a failure from a noble family. The family head, Kavya's Grandfather decided to send Kavya for the ceremony. No one from her family except her loving mother shed a tear on Kavya's Departure as she was deemed a failure for leeching of money from family because of her zero talent in magic. It went by an instant not her father, nor siblings said anything to her. She was forced to accept everything or else her family was deemed to be destroyed by the royal family.

Kavya now was sitting on the avatar cussing royal family, her own family, and the stupid ceremony. She was in the cave with various different types of food each type of fruit in its own particular cart. there were many carts for all sweets made in the royal kitchen in huge amounts. No one In the Kailash kingdom saw a dragon and even if someone saw it, no one told about it to anyone but the myths about dragons were told that a Dragon is as mighty as a mountain with at least 50m high and 80m wide and had magical scales which not even an archmage could scratch and a dragon could even shapeshift into a human, and the dragons who shapeshifted into humans were the pinnacle beauties of the world. Kavya herself was made to wear one of the finest Dress in the kingdom it was a  netted semi-transparent light purple off the shoulder mini dress which showed a little of her cleavage bordered with real gold embroidery, she was studded with gold jewelry.

The queen herself gave Kavya a small handbag and was told to open it in front of the dragon. But Kavya didn't give a shit about it and opened it. It contained a few pouches, Kavya opened a pouch from the bag, it contained slightly yellow colored powder. Kavya smelled a little bit of that powder.

'No, wait what if it's the aphrodisiac where it takes its effect after burned, No!!.'

'Then lets just burry the pouches'

Kavya took out the pouches in the bad and buried them in the soil using some of the jewelry from carts in different places in the cave and filled the handbag the queen gave her with the finest jewelry from the carts.

' So what if the dragon is the pinnacle of human beauty I won't allow him to touch me. I myself will decide my partner no matter what '

'So what if I am not as beautiful as my sisters but I will be my own master.'

It was wrong though Kavya was not as charming as the current princess of Kailash kingdom she was still one of the most beautiful girls, it's just that she did not receive care from her family because of her zero talent, or else she would even rival the princess herself.

In fact, after taking care of her in the royal palace, she was now very beautiful she would definitely look like an angel if she wanted to be.

Kavya always wanted to be a Magic Engineer, she dreamt of making new things for people and loved when people used them. Though she couldn't be one because of her zero talent in magic.

It's not that mana pool and mana regeneration could not be increased. Both of them could be increased with medicinal herbs and potions but they cost money, a lot of money to be precise, a fallen noble family couldn't afford those for their daughter that too for someone which could not be even average after spending lots. Compared to her brothers and sisters she was classified a useless because all of her siblings were above average in magic.

Magic is a simple thing one should know how to gather his/her mana from the mana pool to a specific location for example the palm and condense it in a spell.

A spell is nothing but 3d figure, just like a magic circle but in 3d and voila a fire would start in your hand. magic is fueled by mana it uses mana as its source. In theory, everything is made up of mana the air, the tree everything. Mana is all around us. Though Kavya had a low mana pool and low mana regeneration she had a very high mana perception she could feel mana to its depth. It was like the air she could not see but felt the denseness of mana. Kavya wanted to become an engineer because she loved how magic tools were used to help people and she was very sensitive to mana as she could feel how is the mana flow in these tools and wanted to create magic tools because of this mana perception.

It had been 4 hours since the royal family, priests, and others left Kavya in this cave after all the prayers and bullshit. Kavya sat on the altar for the first hour cussing everyone she knew for her death. The next two hours she buried all the aphrodisiac pouches around the cave in a different location. For the last hour, she gave up on life and was eating sweets from the royal kitchen made by royal chefs, thinking of having a feast before death.

Suddenly the avatar started to glow and weird lines started to pop from the altar like an active magic circle, The whole cave was lit from the light of the altar.

Kavya was astounded, Fear could be seen in her eyes it was like she was paralyzed she had no idea what to do she was dumbfounded by the sudden light. Until she grasped the moment and kneeled down to the ground touching her forehead o the ground. Her heart raced like crazy, Her whole body felt cold and even sweat could be seen on her palms. The altar remained bright but suddenly, Kavya felt a shiver through her spine as she could see a shadow and felt a huge amount of condensed mana from the altar she understood that a dragon has arrived she trembled in fear and spoke in a terrible manner.

"I bow before the almighty and great dragon as a tiny human and pay my respects."

Kavya said it in one go in a tense situation until she heard a voice.

Kavya raised her head in fear 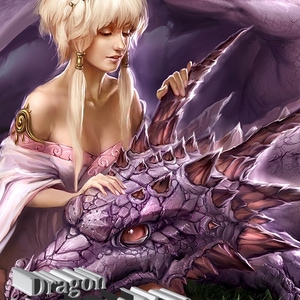 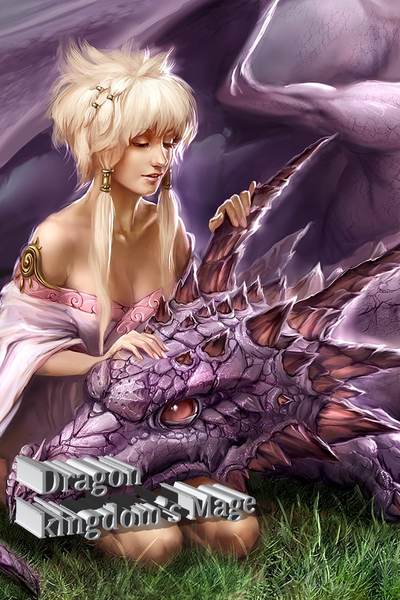 Kavya the youngest daughter of a fallen noble was picked by the Kailash Kingdom for the sacrificial ceremony to the Dragon Kingdom. The Dragon decided not to eat her but to take her to his kingdom. This is the story of Kavya in the Dragon kingdom.
Subscribe 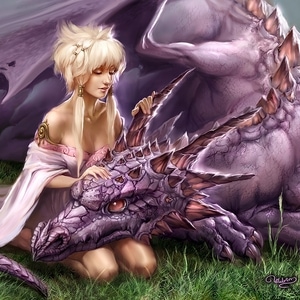