Loud sounds of footsteps pattering against the hard concrete floor.

“Hehe-” some random giggles come from all around the area. They look around frantically trying to find a way out! Suddenly, stopping where they stand and carefully examining their surroundings. Once they find where the Exit sign is. The flash trops to the floor with a somewhat loud crack.

As the day slowly follows.  Day light shines through the glass door. The sound of screeching tires pulled into the parking lot of the building.

“So are you ready to open agion today?”one of the guys slammed their car door.

“Oh come on Noah why are you always so,-”He gets cut off when Noah drops his keys looking at the ground in front of him.

“Noah-? What's wrong?”He looks over at Noah’s shredder. A young girl lays on the ground lifeless.  Blood covering Her uniform and hair.

“Uh- Gray-son?''Noah shudders while turning on the lights, almost gagging at the secne. Grayson stood thinking for a moment.

“I don't know what we are going to do about this. We will be opening in a few hours!” Grayson realized that they were running out of time.Noah put a hand on the floor looking down at the cold and breathless human.

“What do you mean we might have to shut Down!” Grayson threw his arms across his chest. “How are we even gonna get away with this?”He looked away from the dead body that Noah was now trying to find the iD of the girl.

“  I uh we could just call and say that  the health officer came to the pizzra and  put too many health violations down.''Noah said as he was able to pull out an ID card from the shirt pocket of the young girl. Noah hands the Id card to Grayson. Taking it in his hands the scent of death fills his nose. The name seems to be anonymous or just hard to see.

“Oki, so we are going to tell the people who let us open a while back that the health officer came and said stuff?”Grayson questions while helping Noah up on his feet.

“Mhm,” Noah, pulls out his phone. Grayson grabs his phone away from thim.

“What is it grayson?”

“It's just what are we gonna do with the body?”

“Just trust me on this ,I know what i'm doing.”He took the phone back. Grayson growled at Noah’s responds then walked over to the great big stage.

“ I'm sorry you two, time ends too fast huh”Grayson whispers to the stage. AS Noah was on the phone  Grayson was picking up some of the fallen over objects. Just as he hung up the phone he yelled over to Grayson.

“What is it?”Grayson yelled back as Noah pulled the body across the floor.

“What the heck are you doing! You're dragging blood all over the floor!”Grayson wasn't happy.

“Just get over here and help me gray.” Grayson growled, picking up the body on the opposite end.

Grayson helps Noah pick up the girl and put her body near one of the arcades.Grayson confused gives Noah a weird stare.

“What are you planning for Noah?” He crosses his arms once again.

“What are you even trying to do?”Grayson questions puting the lags of the body down in front of the arcade.

“Makeing it look like the wasnt murdered”He rumbled as he  putsed an old arcadied on the girl. Grayson jumped back at loss of that his friend is doing.

“Thair now it will look like it was anaxscadent.”Noah looked over and shocked Grayson as another bunch of cars pulled into the drove way.

“Grayson, boi get your mind out of the gutter”Noah sighed.

“You know why don't you get all the animatronics in one spot and start packing them up.”

He patted Grayson on the back and walked out to talk to the other men.

“Well Gray ,we're shutting down, now go on my boy.” Noah walked out the door before he could say anything else.Grayson watched as his older brother was lossing it.

“I swear, what am I going to do with you?”He sighed, walking over to the large stage in the main room. Looking over at the somewhat tall blue and black,and wight rabbit.

“Let's start with you,oki Bunyix?”He was talking to the amitronic like as if he could barely understand him.

After Garyson got both DC and Bunyix off the stage he was already sweating.

“Why do you guys gatta be, so danm fucking heavey.” He huffed,

“One more to go.”They pushed the large object that helped him move the animatronics.

Once he got all 3 of them in front of the main stage. A lot of people came in carrying the night guard out of the building to the hospital even though they weren't coming back.

Grayson looked around for Noah only to find him talking with the owner of the place.

“What's going on?” Grayson walks up to the small group.

“We're just talking about what's going to become of Dc and the others,”Noah adds.

Grayson seems a little bit upset with their responses.

“Well where going to have to shut down anyway,so?”Grayson doesn't want to have them

“We'll talk more about this tomowo, then i'll decide what's going to happen to the place alright.”The owner replies realizing how late it is. It was quite chilly out. Naohen could see his  own breath as he spoke,but he didn't pay very much notice to it.As he finished up talking to the owner Grayson leaded agents the wall pulling out a cigar out of stress.

“UGH!”I completely forgot about my kids basketball game.``Noah was in a rush to grab his keys from his pocket.

“Yeah uh-.. Can you finish cleaning up from me?”He stood outside of his car.

“Sure sure just give me the keys to the place and i’ll lock up .”Grayson groaned.

Grayson watched as he left him there to do all the rest of the work. He never liked having to be the last one there; you never really know what can happen when you're alone.

He scratched his cigarette on the concrete to put it out. He then opens the doors to his once favorite place. Luckily it was still daylight out and he didn't really need to turn on the lights. The windows gave off enough light for him to see. The main thing that he really wanted to do is figure out why the girl died. He looked around, noticing that the blue and black rabbit hand moved from his location. Grayson looked around thinking he might have  put him in a different spot.

“Crash!”something had fallen over in the back.

“What?”Grayson felt like he jumped out of his own skin.He heard it again.

“What!?,whose thair?”he was starting to freak out now.slowly crashing over to wear he heard the nose come from ,he could see the dried up blood on the carpet.

``hello?”Swapping over the hallway looking back over some of the old pitchers from when the diner had visitors around,and little kids would draw pitchers on the walls. He found what was the night guards office.

“She was such a sweet girl.”He thought in his head ,as he walked over to the desk in the middle of the room. It was empty, the tablet was still there as well as the recorder. He picked up the spinny chair off the floor. Grayson sat in it trying to imagine what it would be like for him to be in the girl's shoes.no one knew her name it was always a mystery. 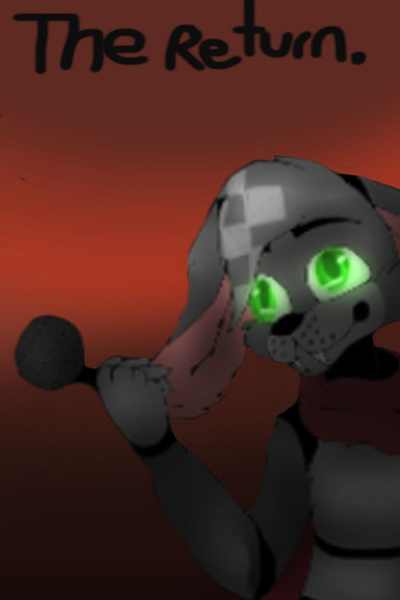 Loud sounds of footsteps pattering against the hard concrete floor.
“Hehe-” some random giggles come from all around the area. They look around frantically trying to find a way out! Suddenly, stopping where they stand and carefully examining their surroundings. Once they find where the Exit sign is. The flash trops to the floor with a somewhat loud crack.
A loud high pitch scream follows. 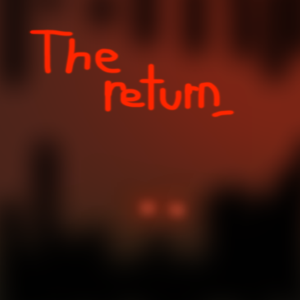