‘Father, Father, why was I born?’ asked the Fruit of the Fruit-bearer one day.

Dawn was only coming up, and the apple tree was not quite prepared for such a round of childish curiosity before his morning absorption, so he bade the little rascal wait. Hopefully, he might even forget all about it by the time breakfast is over. As is usual of youthful inquiries, however, the apple persisted with his barrage of questions until his father found it wiser to deal with the matter posthaste, lest it develop into a bombardment.

‘Well, Son, this is a very interesting question’, he began reluctantly. ’I remember asking it of your grandfather when I was your age myself.’

‘Well, Son,’ said the tree reflexively, ‘it has been since time immemorial that all fruits will fall to grow up in their trees’ images, and will have fruits of their own who too will one day continue the line into posterity.’

The tree was growing impatient. ‘What do you mean “why”? It just is. Always has been and always will be.’

‘But, Father, that would mean we are the same.’

‘And we are’, replied the tree tartly.

‘But are not I me and you you? If I am not you then why should I ever be like you? Are we not different from one another, Father?’

‘We’re all apples’, roared the tree tremorously. ‘Apple fruit falls and grows up to be apple tree. That’s the way of life!’

After a moment lost in excitement, the tree noticed his fruit shaken in fear and composed himself, and softly said:

‘Listen, Son, you will definitely become a tree one day, so you had best grow up and get those childish notions out of your head as soon as you can.’

‘And then you can even be just like me’, the tree added with a laugh.

After this round of fatherly counsel, the tree attended to his earthly nutrients, and left his fruit sitting by himself. The apple, however, still was not convinced of his purpose in life. Why was he born? For whom does he fall? He then noticed a bird landing upon the branches.

‘Mister Bird, do you know for whom I will fall?’ he asked the bird. ‘What is my purpose?’

The bird was amused to be asked such a thing by a fruit. So he decided to humor it. He cocked his head to one side for a while in meditation and said:

‘That is what my father says too. But to begin with, aren’t we all different? Even my father and grandfather are different. Why should a person grow up to be like their father?’

The bird was ruffled. He was beginning to find this much more difficult than he’d originally anticipated. He cocked his head again and began to tap his foot angrily on the branch. He did not want to be bested by a fruit’s question. Upon exiting his reverie, he said:

‘I’ll be back with reinforcements.’

And so he took off to ask and invite any animal he can. Soon enough the entire wood’s inhabitants were assembled and they discussed the problem together. Beasts and birds and bugs and all wondered and pondered at the matter, but arrived at no conclusion. Why was anything born except to become like its predecessors?

The debate grew slowly more explosive, and the debaters exchanged barks and growls and squeaks and screams, but grew no closer to any answer. Everybody was losing hope. Then voices began to sneer. There were two of them. The snake was letting out short susurrous bursts, and the fox was contorted in a fit of chuckling.

‘Why are you laughing?’ asked a little rabbit who stepped up to represent the remaining animals.

‘Why, because you’re all so hilarious of course’, replied the fox as best he could hold himself from laughter. ‘The answer is so obvious.’

‘Do you know why things are born, Misters Fox and Snake?’ ringed the hopeful apple.

‘Yeah,’ the rabbit joined in suspiciously, ‘do tell us. We are all dying to know.’

From behind her, the snake slithered and drew its snout close to her head and gently hissed:

Then he pounced upon the rabbit. Luckily enough, she leaped in time and blended in with the crowd of animals.

‘What!’ exclaimed the fruit.

‘Not specifically by us’, the fox added. ‘But yes, to be eaten. By some bird, or squirrel, or even by a human. That is your fate, as that rabbit there will eventually come to us.’

The animals were greatly offended by this performance, and expelled the two of them immediately from their midst. But it was too late, for what had been said had already planted itself within their minds; now they were summoning all their wits to refute it. Surely things are not born to be eaten? Some of them began to despair, and the sound of weeping could be heard from afar.

This invited the curiosity of the cat and dog who both left for the woods to investigate the matter. Upon their arrival at the source of the sound, they were surprised to find an assembly of woodland creatures joined in public lamentation by an apple tree. And they asked:

‘What is the cause of your suffering?’

The apple slowly gave an account of all that has happened.

The dog and cat looked at each other solemnly for a moment and then at the surrounding animals.

‘What they said isn’t wrong’, the cat began.

And the animals started again in agony.

‘But it should have been said differently’, he quickly added.

‘How?’ asked the apple. The animals paused to listen.

‘Animals are the same. When we die we can be eaten by other animals or we can return to the earth. In the end, we are all helping our environment.’

‘Though we don’t have to die to do that’, inserted the cat.

‘Yes, right. We can help others while we are still alive. Trees give shelter and food to animals. Flowers give nectar to insects. Parents give their children guidance and protection. I and cat, we give our services to humans and in turn they give their reward to us in the form of shelter and food of a sort that we cannot make for ourselves.’

‘We live to help each other, simply’, the cat summarized.

Everybody was amazed by this revelation by these two enlightened ones. They were no longer lost without a meaning in life. They existed to help each other endlessly.

‘I exist to help others’, he said to himself.

‘Or do I?’ In the end, he was not very pleased with the answer he had received from the dog and cat. ‘Other people are other people. If I exist to help them then what if there’s nobody to help? What am I then?’

In darkness as he mused to himself, a sweet sound called out to him from underneath. He looked around but saw no one.

‘Who is it?’ he asked with a quiver of fear.

A swirling mist arose from the earth and took the form of a woman.

‘It is to become one with me. You will fall from your home, and you will come to me, and our flesh will become one.’

‘Because we were destined to be’, she said as she held him near her bosom, where it was warm and sweet. ‘And because it is the greatest thing in this world. You will pierce into me, and we will melt into each other, and we will experience otherworldly joy.’

The apple was pulled by an irresistible urge towards the ground.

The fruit was shaken, but it would not fall yet.

‘But perhaps this is all a bit too soon. Your time has not come yet. Nevertheless, it soon will. I’ll be off for now.’

The spectral figure blew a kiss into the wind, and disappeared.

After a moment, the apple regained its calm and gazed into the night sky thoughtfully. If only the stars can answer him. Despite how charming the Earth was, is what she told him truly reality?

‘Why then are there all these other things that I have experienced?’

Within his contemplation he lost awareness of his surroundings, and darkness had given into light. It was late in the day that he finally awoke to the world around him. He then felt that his stem was finally giving in, and it was soon his time to fall to the ground.

‘I suppose I must go on, with or without an answer’, he concluded bitterly.

From afar a young human approached and seated himself in the shade of the apple tree. He had an inward gaze that told that he was thinking very hard about things as well.

‘I wonder if he’s discovered his purpose in life.’

Suddenly, the fruit was parted from its branch and made towards the ground.

‘Ah, I might as well let things be. Let me be eaten by this young man, and let my core return to the lovely Earth, and let me continue the line of my kind after my father and his father before him and let my children continue it.’

‘If only I could have found out the purpose of my life though.’

Upon hearing a thud, the young man looked to his side and found an apple, which he pensively picked up in his hand. And then he queried:

‘Why does the apple fall?’ 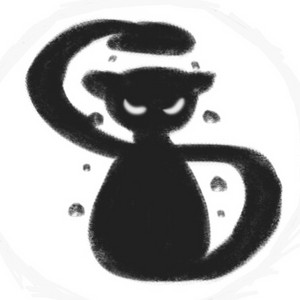 Written when I was 17, which is admittedly too old to still be interested in fables, and yet too young to be making a subversive one. 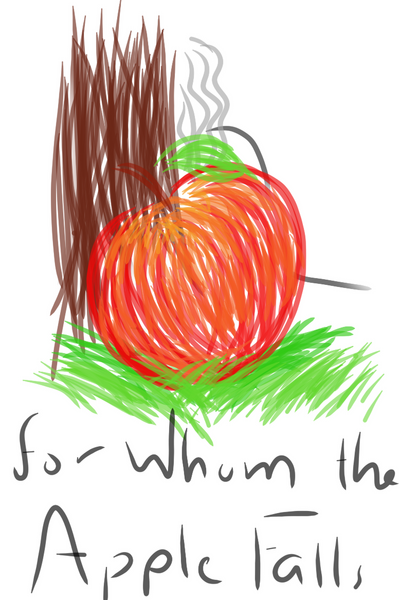 A series of whimsical shorts, headlined by the eponymous piece about an apple who begins to question the purpose of his being.

Each story has its own personality and style, and qualifies for different genres, but because of their shared mystical inspirations, I have put them together under the 'fantasy' category.

A brief description of each story:
- For Whom the Apple Falls (tongue-in-cheek soul-searching fable)
- The Solar Emperor and the Lunar Princess (a highly researched reinterpretation of the Japanese folklore)
- Beneath the Snow (raw comedy dissection of a famous fairytale)
- to be announced (greek tragedy)

Feel free to read out of order! 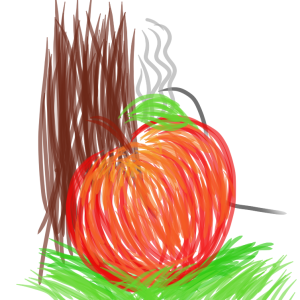