Thank you for reading. I currently plan to release chapters every Monday and Thursday for now. Have a good day!

On the last free day of Erin’s life, she started the morning by becoming the temporary backdrop for a ‘cute’, little scene for some Protagonist asshole at her favorite coffee shop.

It was her favorite shop because of its cozy, no-frills environment and the usual morning barista, a disheveled Arab kid named Kalim, had the same ‘don't talk to me before sunrise’ attitude that Erin bought in bulk. Just ahead of her, there was a nurse at the cream and sugar counter growling unintelligibly as a mess spread before her. Everyone politely ignored her. She probably came from the hospital a block or two away, trying to get away from work, but instead feeling a spectacle. Behind Erin was a heavyset man in a suit, accountant or lawyer, Erin guessed who stood too close for her comfort.

The barista clacked Erin’s three-shot Americano onto the counter. Before she could reach for it, however, the shop’s door opened with a sweeping gust. As if carried by the wind through the door, a creeping, silent, electric sensation seemed, to Erin, to seep into every surface, including herself. She turned around, drink abandoned, to stare at the front of the coffee shop against her will. She was not alone.

A clatter and splash followed a small shriek from the nurse. Someone sitting at one of the small tables in the tiny coffee shop stage-whispered “Beast Hunter!” into the silence.

The reason that everyone was frozen in staged shock was the gruff, middle-aged man with long, black hair and heavy stubble filling the morning twilight dappled doorway. He was wearing deerskin pants, a large, grey wolf pelt cloak, and ribbons of drying blood. He seemed to wait for everyone to register the words, before sneering and swaggering towards the counter, where no one stood in his way.

Everyone's eyes were focused on the streak of crimson across his bare chest. She wished she could roll her eyes, but the Plot wouldn’t let her while she could be seen by this 'superhero'. Her role was ‘silent onlooker’. Beast Hunter was reputed to be a glory hound, thus the audience and theatrical entrance.

She knew not to resist. The scariest part of this was that Erin’s thoughts were completely uninhibited even as she was paralyzed by the force putting on the show. Being Puppeted was only a physical loss, like watching a first-person perspective movie, but without the motion sickness. Erin’s - and all the other temporary puppets - body simply moved independent of her mind’s intentions, and refused to respond to any willful attempt to fight it.

She had learned not to struggle before she was thirteen; panic was one of the worst things you could do when in the grip of the Plot, because the longer you struggled, the more likely it might need to make you permanently docile. Panic attacks were best swallowed until after the Plot and Protagonist had moved on.

Another few moments lapsed as the spell held for dramatic effect. Finally, Beast Hunter stepped towards the counter.

The usually-disaffected Kalim scurried over to the register, asking brightly, "How can I serve you today?” He was bright and grinning and was nothing like the dour, fewest-words-possible demeanor he offered to everyone else who ordered. Still thrall to the scene.

The electric buzz of Plot receded from full control for Erin, but it bristled at the back of her neck, it’s menace a threat rather than fact. She abandoned her coffee on the counter next to Beast Hunter. Instead she turned to grab more napkins for the poor nurse who had been doomed to drop her drink for impactfulness.

The nurse's face was bent low as she placed napkins to stem the tide of her coffee and milk across the floor. Her face, currently hidden from view of Beast Hunter, was a rictus of fury, a contrast to the wide-eyed shock forced by the Plot. She broke her cold, silent rage to give Erin a thankful glance as they piled napkins. Erin offered a sympathetic half-smile back.

Erin might have just left, but then there would still be a mess to clean up, by someone else who would be just as threatened by the Plot.

Behind them, Beast Hunter said, "Mint berry smoothie. No whipped cream.” His voice was as gruff as his appearance.

Oh, how funny Beast Hunter must have thought he was being. Two more people fled the coffee shop’s small lounge area while they weren’t being trapped.

This was not a chain or some big outfit with twelve machines for a hundred types of sweetened vaguely-coffee-flavored liquid. They did espresso and coffee, and sold baked goods from a bakery down the street. After a slightly long pause, Kalim answered, "Sure thing! Just give me a moment. No charge for heroes!"

A second employee - one Erin didn’t know as well - came out from somewhere in the back of the shop and had brought a mop. They muttered quietly that the shop would remake the nurse's drink. Her body went subtly stiff again, and the Plot forced her to offer a nervous laugh and declined reluctantly, and the pair of them traded soft insistences. They were both within eyeline of the Protagonist, who was surveying his damage. He turned away as a smoothie machine suddenly whirred from the back of the counter. Erin passed by, unharassed by his gaze and the Plot.

The nurse turned away to hide her fury again, but seemed to firmly be unable to leave until the drink was remade.

The rest of the coffee shop was going about their business slowly, cautiously, like they were afraid of being caught in the baleful stare of an angry god. The place was already nearly empty of everyone that could leave, now that the Plot did not need them to pose for the superhero’ grand entrance and scene. The man that had been standing too close behind Erin was long gone.

Erin turned to her abandoned Americano on the counter. Keeping her face as neutral as possible, knowing the blood-spattered protagonist could turn towards her at any moment, she pulled out her wallet and left the last of her cash - ten dollars - in the tip jar. The Plot buzzed harder for a moment as she pulled the bill out but it did not stop her mild gesture of defiance. Was that a threat? She’d had only passing experiences with the Plot in the past, and just dismissed it as wariness rather than pettiness from the all-powerful, unseen entity.

The boy behind the counter didn't appear to notice as he frittered about - usually, his default speed was a trudge - trying to gather the necessary sprinkles and whipped cream; all to support the Plot, which had a punchline to finish. Beast Hunter went to sit at a nearby table, assuredly waiting to be catered to, like this was some diner.

Erin noticed that the nurse's face was simply nervous and fretting as she apologized again for spilling the drink to the second employee. For the third time, she was being controlled to appear as the clumsy nervous nurse who started and stuttered at the presence of a city ‘superhero’.

Erin kept her face neutral as she added some half-and-half to her steaming Americano and left before the Plot decided for something silly to happen to her for Beast Hunter's benefit. As she stepped outside, Erin didn’t bother keeping the annoyance off her face.

The nurse would continue to be a nervous wreck, rather than an overworked grouch. The cashier would brightly greet every other customer, if there were any more. The smoothie would be made because that was what happened in the presence of the Protagonists, or Outsiders, or Player Characters, or whatever term became popular this year. They took control of a scene and changed the physics of the world for their own game, so that their Plot could move forward.

Erin made it to her office with no other mishaps, trying to enjoy her coffee without running into any more annoying reminders of her world’s failings. She only ran into a minor reminder, where a corner store advertised the latest front page of the Meridian City Times. It showed the outline of a hulking figure with the caption, 'New Villain Arrives in M. City?!?'

She didn’t bother reading the papers. They were heavily censored to protect the writers from becoming Puppets. The internet was not so restricted, because Protagonists seemed to have little interest in spending much time on online communities outside the big social media sites.

Erin had read all about the story on her websites already that morning. The new villain was expected to be a robot, or an alien, or a shape changer, or some cryptological creature…really, no one knew anything right now. Everyone was certain, however, that this new villain, currently without a nickname, would get a big dramatic reveal in the third act of the newest story arc for the Cavalry.

That was how the stories were supposed to go. That’s how Erin’s should have ended in an emotional beat to someone else’s story, woven by unseen hands. 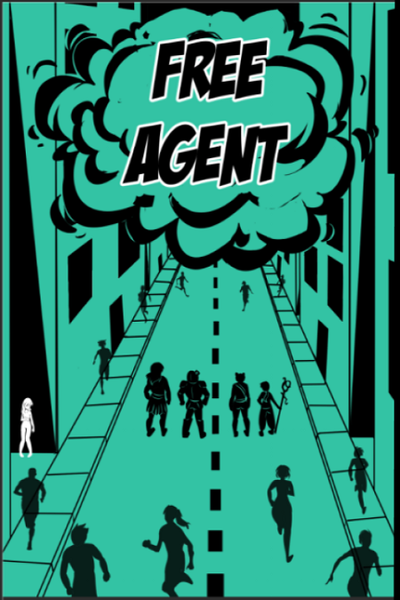 Erin Razor uses her coffee to get through the day, her motorcycle to get around Meridian City, and her constant research to survive what she - and most of the world - is pretty certain is a computer-generated reality.

Had she known a career in programming would put her in an office with Tyson, one of the Outsiders joyriding in her world, Erin might have sought isolation on a rural commune.

The mind-dominating system that controls the world now seems determined to force Erin to make friends with Tyson and his cohort of Outsiders. Erin quickly realizes she’s in a fight for her own mind as she tries to contain the havoc wrought by their ‘fun’, which starts with events as a seemingly low stakes date and morphs over their friendship into spectacles like Erin’s own live- streamed kidnapping.

Either she must resolve to absolve herself of the guilt of enabling these Outsiders and their deadly superheroic games, or else Erin will need to stand up to the system that has kept everyone, including the Outsiders, ignorant of the scope of its conquest to make any difference.
Subscribe 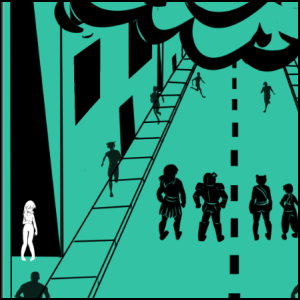