Iron: The Art of Loneliness

My mind has become a trapeze artist with memories: I can’t seem to remember the road that got me where I am, and I definitely have no idea why I’m straddling this rope of questionable decisions. A population of strangers and compatriots are watching from every corner of the physical and the virtual, and I remember that part of the reason I’m exposed on this slender line of pavement is to stop caring what they think. I hold onto the balancing stick stacked with all my fantastically organized internal baggage and I start to feel as if I may tumble mentally; no, physically.

I jerk my body to alertness and pull my bike level with the seething hot pavement, reaching clumsily for the mouthpiece to my water bladder jerry-rigged to the inside of my armored jacket. I can't even imagine the scene I must be with my bulbous water sack shoving my already bulky jacket up in a turtle shell fashion, accentuating my oddly shaped spine protector. My previously gorgeous brown leather jacket was now charred with brush strokes of wear and ripped seams, leaving gaping holes between my chest and my arm. I snaked the brightly colored tube up through my full-face helmet and sip the disgustingly hot liquid.

<God, hot water is gross. Too gross. But if you don’t drink, you won’t make it to Los Lunes. Sip up, bitch.>

I don’t even remember where this water came from and figure it’ll probably give me raging stomach trauma later, but for now it’ll maybe keep me from kissing that angry radiating pavement.

NM 6 has been shutdown for at least twenty minutes now, for the second time in ten miles. It’s late June and the sun is letting all its fury hit the perfectly tilted planet while I sit sandwiched between two semi trucks for an indefinite amount of time. There is no shade aside from the NMDOT master of the key up the road, with his magic radio to let us know when this torture will end and his high-viz colored umbrella. I start to wonder why they need an electric yellow umbrella in the daylight. My thoughts quickly turn to if I can maybe look pathetic enough to walk away from my bike and sit under it with him. Maybe I’ll even flirt with him, except at this point I look more like a boy than any sort of mildly attractive woman. The weight and insulation of my armored leathered jacket and kevlar pants are roasting me and the sweat is sliding down my body to places I’d rather it stay out of. I can only imagine at this point that I smell like a rescue mission. I think for less than a second of my audience watching from the proverbial bleachers and decide I give no fucks about their opinions, as I rest my alien shaped head on my motorcycle’s tank bag.

I’ve been on the road with my motorcycle for over two weeks now, with nothing but a hilariously tall stack of camping gear and personals behind me. Like something out of Mad Max, my bike’s comical tower makes it hard to leverage with gravity, a mistake I’d been regretting as I weaved through the country on roads built for the limber. Still, regrets being simply what they are, I confessed I honestly needed every knick and knack in those bags, even if it meant that one poorly timed gust of wind would send me onto my side.

I came out here probably for the same reason most ambitious people in their twenties and thirties do: to see the unseen, in both country and mindscape. With nothing so noble as Kerouac, I left on my olive green Harley Sportster 883 from northern Alabama en route to Utah with a terrified spirit and more privilege than I deserved. For me, the journey was more than unveiling things I didn’t know about myself - it was to fix things I did know about myself. I knew I couldn’t stand myself; that despite my accomplishments, I had moved myself lower than my enemies in my own mind. I had developed a mantra that I laughed about with friends, “No one can hate me more than me - I am the best at that.” As if that was some sort of trophy I should be proud of. Not that I could play fifteen musical instruments well and regularly performed for crowds eclipsing two thousand; not that I had published two graphic novels of a story that I had been writing for over fifteen years; not that I had released multiple records; not that I had nearly finished my degree in atmospheric science; not that I could sum any of these parts into a desirable human being who deserved friendship or kinship of spirit. Lord, no. Thou shalt not humblebrag. Except it was more sinister than that and rooting itself so deep within my psyche that the dysphoria was becoming an unavoidable part of my everyday existence. Luckily, I had at least enough intuition to realize how profoundly ridiculous these things were. Even at my worst, I didn’t think I deserved to be treated the way I was treating myself. I certainly wouldn’t let another human treat me this way. So why the fuck was I allowing my own mind, which doesn’t pay goddamn rent, assault me in such a fashion?

I stacked my luggage on my bike at 10am on June 4th and then sat on the porch of my one hundred year old Huntsville, Alabama mill house staring at it, sipping my chicory coffee.

<You’re going to die out there.>

The route was set to take me from my home in northern Alabama to Zion National Park in southwest Utah, an intense 1800 mile trek, in four days. Originally, I had planned to take ten days to get to my most westernly destination, but my drunk job of being a gigging musician delayed my departure. When you perform for a living (a truly unstable profession) you don’t get the luxury of turning down your mortgage payment, especially when you plan to take a month to go on a vision quest. But I had reservations! Reservations at the most coveted of campgrounds: the Zion National Park Watchman campground. They were mine and booked many months before. They were unmovable and mystical. Safety, sanity be damned - I was going to get to my site. In four days. In June. On a setup I’ve never ridden.

I had never been more than one hundred miles in a day on my motorbike, much less with fifty pounds of towering luggage. I didn’t even have a passenger pillion. My bike’s shocks had been tightened to support the Tower of Questionable Life Decisions on its poor back and me, being a mere 5’5 pear on good day, could only set my feet flat on the ground if my hips and back were magically where biology intended them to be at that moment. I knew enough physics to know that if Flynn, my ironclad life partner, started to tip… well, we’d both be a little more than physically bruised.

I stared from our handy-down metal lawn furniture piled with stuff I didn’t recognize of my partner’s sprawl. I found a place amongst the chaos to nestle my coffee cup, continuing to look out at Flynn.

“This is a terrible idea.” I said to Nick, who was glued to his tablet. “I shouldn’t go on this trip. This is so stupid. I’m going to die out there.”

“You can do this. And you’re going to be fine.” he replied without glancing up from whatever it was he was doing. Probably Final Fantasy. We were in a secret competition to get our parties the most leveled up they could be before the other, something I would clearly lose by leaving. With that as a ridiculous and loose firestarter, I quickly came up with innumerable relevant reasons why I shouldn’t go.

“What if Angus passes away while I leave?”

My elderly, sassy fuzzball of a cat had been diagnosed with mast cell disease nearly a year prior. We had been together my entire adult life and man, had we seen some shit: every love, every heartbreak, ten moves, multiple colleges, and just an endless tirade of not knowing what the hell I was doing for fourteen years. The cancer had eaten his fat and muscles so that his little hips jutted out like dull knives. His eyes were still bright though, and he continued to yell flamboyantly for special treats and water from the sink. I had honestly thought that he’d pass away before I left. The vet had only given him a few months, as he had developed ascites and anemia, his abdomen swelling with nearly a pound of blood contaminated fluid from his hemorrhaging masses. Here he was a year later standing at the edge of the drag of his life, flipping his attitude like a Queen letting the world he wasn't finished yet, my fluffy fool.

“He’s a ‘Gus. He’ll be fine.” he replied in the same manner as before.

Puffy cumulus clouds began to tower above as warm saturated air flowed in from the gulf, the dewpoints already in the 60s. It was that time of the year in the southeast where I knew if I waited, the rain would delay me and I could stay home.

“You’ve been planning this trip for months. You want to go!” He looked over at me with his slate blue eyes, adding to the list of reason I didn’t want to leave. With my situation on the spectrum, the fact that I could look another person directly in the eye and not want to scream or vomit was a huge deal. It helped that we shared space on that spectrum of being not neuro-typical. We had been together two years, but friends for nearly ten. He was my person. I reminded myself, what partner would let their significant other just jump on a two wheeled death machine for an indefinite amount of time to see the country? Certainly not my hyper-controlling ex-husband who had all but stripped me of my ability to ride both mentally and by actually taking my previous motorcycle. My only comfort was that I knew that it was too tall and he was too round to ride it. I was stupid with luck to have someone who understood my spirit, my wanderlust; Nick understood that my mind was off its rocker and that this behavior was normal business hours. It’s why I made such a good touring musician; somewhere in my blood, likely from my biological truck driving mother, was a nomad. 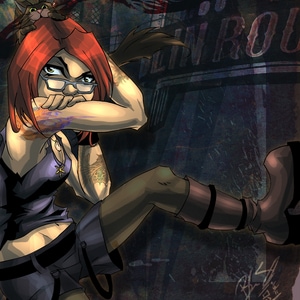 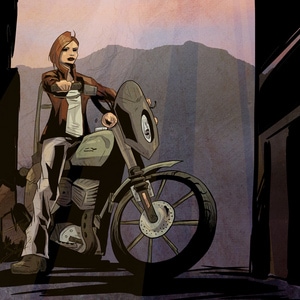 Iron: The Art of Loneliness

At 32, the profoundly introverted Melinda Lee found herself in the ruin of near decade-long marriage, graduation from a degree that took far too long, and more fear than any one person should have. That summer, she strapped her worldly possessions onto the back of her Harley 883 Sportster and set out for Utah from Alabama, completely alone. Told with sparkling wit and humor, Iron captures this terrifying journey across America's heartland by a young woman who persevered against all odds, finding joy and strength in being alone on the road.
Subscribe 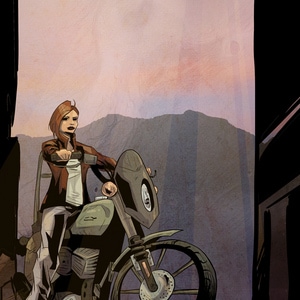