It was fall, but the day was hot like in summer. Cold beer in the shade of a porch would be perfect right now. But fate had different plans for Wilhelm on that day.

There was no beer and no porch, there was no peace nor scenic landscapes to admire.

There was an execution instead, and he was about to experience it from the worst side.

It wasn't even an official execution, no, he didn't have the luxury. Extrajudicial punishment was what they called it. What a way to go.

Wilhelm was known for speaking his mind, and usually he got away with it, but this time he wasn't so lucky. Getting into an argument with Reinhard, a fellow general was a grave mistake. Wilhelm knew this would end bad, but he didn't expect this kind of punishment.

He was standing there in the sun. His beige hair ruffled and the uniform disheveled from a fight he put up as the other soldiers were dragging him to this secluded place. His hands were tied behind his back. Instead of cold beer there was a metallic aftertaste of the blood in his mouth. Instead of a porch, there was a ruined brick wall behind. And there was no scenic landscape in front, but five soldiers with rifles, ready to shoot at any given time. And right next to them, a bit to the right, Reinhard with his ever so annoying little smirk.

They all were once on the same side. Now he was treated like a traitor. Amazing, how fast one can fall from grace, how fast people you knew would be willing to stab you in the back.

In a situation like this one would lose their cool. But Wilhelm wasn't afraid. Granted, his breath was fast and he was trembling. But it wasn't because of fear. It was wrath resonating in his body.

He didn't pray, he didn't beg. He just stood there with a frown, his stare was focused and cold, piercing his former comrade.

That bastard. How he loathed him.

There were rumors about Reinhard in the army, about his indecent "hobbies", however everybody decided to ignore it, as long as they weren't involved. Wilhelm never wanted to be put in the same squad with him, but orders are orders. He did well enough to endure the harassment for a while, but he reached his limit.

And this was the result of it.

"Stubborn as always. Even in a situation like this. Charming."

Reinhard twirled a strand of his jet black hair, looking a little bored.

"As much as I love your little pouts, it won't help you this time. However..."

He slicked the hair strand back and adjusted his hat.

"...if you value your sad little life, I'll give you one last chance to... redeem yourself. I'll make it simple, really."

Reinhard chuckled staring with his cold blue eyes in the hazel eyes of his cornered comrade.

"Well then. If you fall on your knees and give me a nice blow job, I will call my men back and forget our little strife."

He smiled creepily raising his head, in a sense of twisted superiority.

"FUCK YOU, AND YOUR DIRTY DEVIANCY YOU FUCKING SONOVABITCH!!"

"What a pity... really... Oh well, it doesn't matter. I'll find myself a more willing doggy to play with. Like always."

He shrugged "But it would've been fun to tame such aggressive mutt as you to my... dirty deviant needs."

The balck haired general said mockingly and raised his hand, a sign for his men to prepare to fire. Wilhelm was grinding his teeth. The twisted comrade continues his talk.

"But then again, aggressive dogs need to be silenced. I'm sorry, but I have to kill you now, Willy. Any last words?"

Wilhelm shouted his face twisted in fury, almost like a devil. The five men felt a chill running down their spine.

Reinhard just sighed unaffected by the display, and waved with his hand gently, giving the signal.

Five rifles fired at once, sounding like a single blast.

The bullets pierced Wilhelms torso, the impact causing him to sway tilting his head back.

However he didn't fall just yet. He growled and managed to stand for a little bit longer, making a step forward,the demonic expression still on his face. It scared the men and made even Reinhard blink in surprise.

But the pain and the crushed, bleeding organs got to him, and the blonde fell on his knees first, then dropped on his front, drawing his last breath.

The men sighed at the relief that it's finally over. Reinhard waved at them to go away.

"Dismissed. Report to the HQ that Wilhelm is dead, fell in battle or something, whatever seems fitting. This execution never happened. You know how it goes. I'll take care of the rest."

The men saluted and left the scene in a rush. They may be loyal to Reinhard, but even they didn't want to be around him for too long. Questioning his actions was madness, and Wilhelm was a good example of it. And if the rumors were true then they really didn't want to witness what would happen next.

Once they were out of sight, Reinhard approached Wilhelms body with a slow step. He stopped for a moment, looking down at his dead comrade. Using his boot he turned the body around, so that Wilhelm was now on his back. His eyes were closed and blood dripped from his lips. Blood stained the places where the bullets pierced him.

Reinhard crouched near him, cradling the lifeless limp body in his arms. He took a white handkerchief from his pocket and carefully wiped the blood from the lips.

"That's what you get for opposing me... if only you weren't so rebellious..."

Reinhart mused, then leaned over and placed a soft kiss on the Wilhelm's lips.

He whispered in his ear, and chuckled.

"Dead or alive, it doesn't matter, I WILL have you one way or another."

With that said, Reinhard picked his dead comrade up bridal style, and decided to carry him to some place where no random passer-by would disturb them.

Critique: Dude, your stories are awesome. 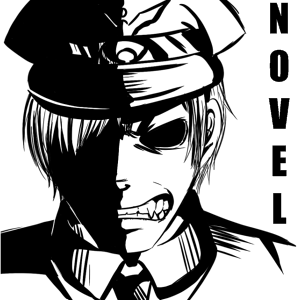 "I died, got revived, been to hell and back. Now I spend my nights as a vigilante. Protecting the weak, and delivering justice in the way I know best. So remember... Karma is watching you."
***
This is a work of fiction. Any resemblance to actual persons, organizations, places or events is coincidental.
This novel contains violence, sexual themes and strong language. Intended for responsible adults only.

Thank you to UltraLiThematic for coloring the banner. 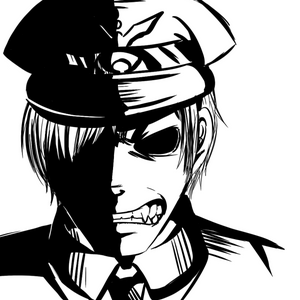