My Classmate's Father Whom I'm in Love With

Mera reaches out to the space beside her, and her hand knocks onto something. That wakes her up. She opens her eyes, usually expects to see no one there anymore. However that night, the man’s still there. He’s sleeping in the prone, his naked back rising and dropping in rhythm.

The girl doesn’t expect to see him still sleeping, to find him still hasn’t left. She immediately holds out her hand to get his cellphone, to check the time. It is 4 AM.

“Mr,” she calls him quietly. She knows her voice won’t get through his dream or his snoring, but she still did it anyway. Besides, he looks tired – she convinced herself. What’s the harm in staying just one night out?

Mera stares at his face, her fingers stroking his thick eyebrows. There’s wrinkles among the two eyebrows and the side of each eye. His breath doesn't smell too good and his beard has grown. The girl leans her cheek on the stubble and rubbed it.

His hoarse voice entered the girl’s ear, making her tremble. “You’re up.”

“Doesn’t it hurt? Don’t hurt yourself,” he stretches his limbs, then strokes the girl’s cheek, making sure there’s no wounds. This man is usually soft, but turns out he’s softer when he first wakes up. Mera places his hand on the other’s neck, then pulls him forward, continuing to rub her cheeks against his beard.

“Why didn’t you leave yet?” asks her.

The man reaches for his cellphone, but the girl’s one step beyond him, “it’s 4 AM.”

The girl grins. The man seldom curses, so she enjoys it when he does. “Just tell them you’re too tired and immediately sleep at the office once the work’s done.”

“Will do,” he picks up his messy shirt on the floor, his pants, his tie. When Mera tells him to just wash himself up while she ironed them, he leaps into the bathroom.

She wants to ask again why he sleeps here with her, but he’s in a hurry, so she can just swallow all her questions. As she irons through the shirt, she recalls, the man always leaves after they done it, no matter how late it is. He would always leave first, paying for the room and breakfast for her. He could just leave the money with her, but he didn’t. It would make her look like a whore, he said.

Despite having said that, still, he would sometimes tuck some dollars into her school bag.

But she doesn’t need the money. She sleeps with him because she wants to.

She wants to find out more about this man whose age is twice hers. Find out more than the fact that he’s a senior employee in a tech company, that he has a family, that he has a pretty wife and daughter about her age. More than any of that. At the same time, she’s afraid to go beyond that limit. All she wanted to do was to be with this man, despite just being a friend, or a sex friend. It doesn’t matter. She could even agree to have a role as the man’s daughter’s friend to get close to him. Or as a whore.

But the man is the type to never sound his own mind, so she’s taking her time to figure him out.

He always looks tired every time he goes home. He’s always a model husband and father – works hard, never drinks, goes home straight after work. But one time, she found him drinking alone in a small restaurant, looking very wasted. The man remembers his daughter’s friends, so it wasn’t that hard. On the way home, he puked twice, apologized that Mera had to clean it up. She offered him her water, and he obediently drank it up.

She asked him why he got drunk, and he answered. People tend to get honest when drunk, and he wasn’t an exception. Work sucks, he said. And he didn’t want to go home either. But the restaurant had closed, furthermore, Mera had accompanied him this far so he couldn’t not go home.

So she asked him if he wanted to keep her company since she, a female student, is home alone tonight. The man had always been a protective father, so it wasn’t that hard.

She lives in a small apartment, with only one piece of every necessities. Despite his drunken condition, the man still realized that in fact, the girl actually lives by herself, and not just this one night. She grew a little afraid that the man would immediately leave, but he didn’t.

He slept only for two hours. For the rest of the night, he acted as if he was a personal technician. He fixed her sink that had been clogged forever, her crooked bathroom and cupboard’s door, her broken fan. She watched him as he worked, as he slept, and she decided she likes his looks best when he’s working.

The first time she hugged him, he was done cleaning her air conditioner’s filter. He might have thought she saw her own father in him, so it was easy. She got to hold his firm hand when going home, tasted his home cooking, got to see this side he never showed his family.

The first time she rejected his offer, they were going to his family’s house, her classmate’s house for dinner. The man must be seeing her as his own daughter, so he invited her to his own house, ignoring the fact that she might spill the truth about their husband and father going to a certain female student’s apartment every one or two times a week. Or he might have told them. Sometimes she envies men for being too carefree.

I don’t see you as a father, she said to him. That time, the one reason that made him keep seeing her was that she’s his daughter’s friend, and that she lacks a father figure. Mera knew the consequences very well – he might never see her anymore. But, instead of letting the man bring a girl to a family gathering that could end up ruining the household, this option seems much better for her.

He was always a model husband and father. She never wanted to ruin it for him. She always thinks that it’s not his fatherly figure that made him attractive, but it might be that way after all. Since she never had a family, she opted for stealing one. But she never wants to drag that man into the same hole as her.

She never asked about why that night the man didn’t wish to go home. She had a hunch. She just knew that it was right, when the man she expected would turn away, instead remained, waiting for her next word.

She didn’t dare to think highly of herself. She just knew that he in fact, doesn’t really love his wife, maybe it was a forced marriage. Maybe that was why it was easy. He cares about her as a father, much or less. Therefore, she collected all her courage. They were already this far, she thought. She had nothing to lose, she prepared for the worst already.

The man once said that kisses are for those who are in real love, he told her not to kiss someone randomly.

So, she only did that to him.

That was their last kiss. Afterwards, no matter how many times they clashed flesh and sweat, he never took initiative to kiss. Mera also didn’t try to – she felt too greedy. After their relationship became intimate and he saw her as an equal footing, she didn’t dare to ask more.

But sometimes, she wondered if he kissed his wife. But it’s obvious that he had kissed at least once. They must have kissed in their wedding.

His outfit has done ironing. Mera thinks for a while whether it’s best to put some perfume to blur the fishy smell or would the perfume make it worse instead. After some thoughts, she opts for the prior. The shower’s noise has stopped, thus she walks in.

The man has just got out of the shower. He has his towel with him, but water is still dripping down his body. He admitted that he seldom exercises, but she can still see the faint muscle all over his body.

“Old man, wipe your body thoroughly. You might slip otherwise,” she hands him his clothes.

“If I were to fall, surely this lad would catch me.”

The man laughs. First time they were together, he didn’t laugh this much. He would always look guilty. But they kept meeting.

She steps backward, planning to leave. But then her waist is held, the man turns her around. He tucks her wavy hair behind, looks at something around her neck. “Wear a scarf today,” he says softly.

“Okay,” she answers, her focus is on buttoning the man’s shirt

“I know you wouldn’t wear it. Just tell them you have a cold,” the man is a bit unhappy.

“Then they would ask for a doctor's prescription,” she looks up to his unhappy face and laughs. “What are you worrying about? It was just a small hickey, my hair will cover that.”

That kind of plan doesn’t reassure him even a bit.

She sighs. “Do you know that this kind of thing isn’t weird anymore? There’s this girl in class who came with a neck full of hickeys. No one questioned her. If they asked me, I’ll just have to say it was bitten by mosquitoes. You worrywart.”

In the bathroom, they still have this glaring competition, fighting over their own stubbornness. She likes this unpredictable childishness this man sometimes has, she likes this competition of staring at each other. If she could, she would happily banter with this man for another five minute, so he would stay even just for a bit.

But she promised herself not wanting more.

“Why don’t you give me the hickey in the mouth as well? That way I’ll have to wear a mask as well,” she muttered. “A perfect disguise, don’t you think?”

She meant it as a joke, so before the awkward silence fell, she laughs it out, “what, I’m joking.”

The man doesn’t laugh, or return the joke. He just stares at her face. She can feel her chin lifted, her lips rubbed. The man’s face leans close, their breath slowly intertwining.

“Should I?” she hears the man whisper.

Her hands are on the man’s tie – his chest. He must not be very skilled at kissing, she thinks. He breathes in an irregular pattern – he doesn’t know the right time to suck on air, the right time he should just let himself out of breath, then stop, separate for a while, for separations would resort to much meaningful unification.

This man only kisses the person he loves, that must be why.

She wants to ask him why. Is it because he wants her disguise as a cold patient to be perfect? Why does he keep worrying for her, after all the crucial thing is now that he still hasn’t got home this late? Why doesn’t worry about himself?

But as he leans closer and closer, sucks her lower lip as if it were a delicious meal, Mera’s mind returns. She dares not to get greedy, but if this man needs her, she would be there for him. 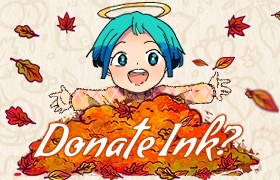 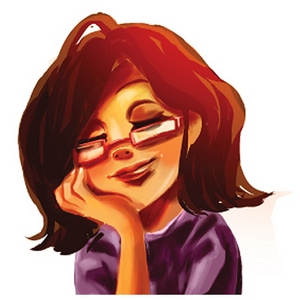 Suddenly I had an urge to write another secret love born in an improbable situations. I'll remake the cover when I have time. Hope you like it. :) 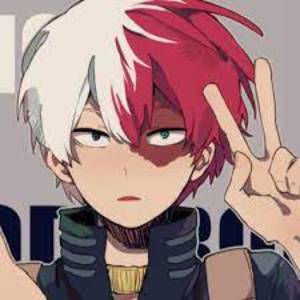 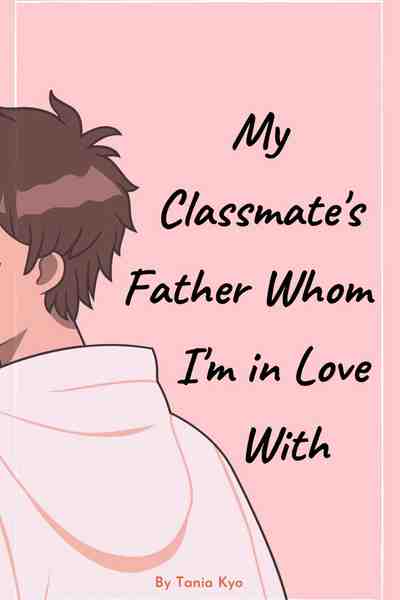 My Classmate's Father Whom I'm in Love With

Mera who had always keep her feelings tight, one day kissed her classmate's father.
Subscribe 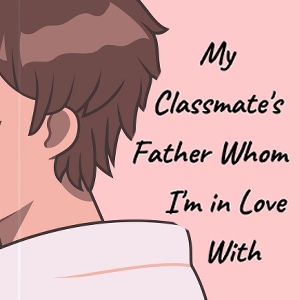