Chapter 1
"Luna..." Nym blurted out.
"Yea?" I replied.
"Could you tell me the story about the Sun?" She purposed with a glimmer in her eye.
"Of course I'd love to," I agreed and began to tell her my story.
"Earth, well what was left of it, had become a pitiful wasteland. Completely destroyed by humans, left in a state of ruin. Moths had spent many years trying to understand and figure out how the Earth had become of this, but alas couldn't exactly pinpoint the cause. Before I'd go to bed at night, my mother had always told me the story of how we came about, now I'll share that same story with you Nym".
Nym's face brightened up, she looked so intrigued with what I was about to tell her.
"In the beginning, a time before time, when the universe had only just begun its expanding, our Sun had been given her own solar system. She was only a child, restless and eager to go off and about into the universe. This was a big deal for her as she'd been asking for so long to become a part of the universe. Once she was given this gift, she was transformed into the giant star humans called the Sun and she ruled over all the planets in the solar system, her most important duty being to bring light to each and every one of the planets. She particularly had a special love for Earth as it was close enough to her to observe and she watched as life formed upon it. This was also during the time in which she fell in love with the Moon. They couldn't always see each which made her sad, but only more excited for when she could (during a solar eclipse). She wanted nothing more than for those eclipses to last forever, they always seemed like fleeting moments. They loved each other for eons as they watched over Earth together, always in a constant battle to meet with one another, but nonetheless still in love".
"They were in love?" Nym whispered with excitement.
"Aha, yea they were, for a very long," I giggled.
"Anyways, back to my story. The Sun had always been fascinated by humans, they were constantly changing and never seemed to stay as constant as she had been all this time. When they had destroyed her planet, she didn't know how to feel about them anymore. She was so hurt and couldn't understand how they'd possibly be able to destroy her creation, seemingly without guilt," I continued.
"I guess now you can understand now how upsetting it must have been to see her world completely crumple and not have the power to be able to intervene". I chimed in.
"That's awful... I have a feeling this story doesn't have a happy ending?" Nym said with a look of sadness.
"Well, She cried endlessly, her tears falling down to Earth and scattering across the solar system. Completely soaking the Earth, like a flood of golden droplets. She was so heartbroken that she eventually stopped shining. Just like that, it was complete darkness, the ultimate light source seemingly gone forever and what was left was a vast and empty solar system with a dead star. Of her tears that had landed upon Earth, they embedded themselves into the soil and laid dormant for eons," I further explained.
"After a long while, Earth had begun to adapt to life without light and started to form flora and fauna that could survive without the light from the Sun. The Earth, while still in darkness had completely transformed into this beautiful world that didn't even seem possible without the Sun's light. Then we were formed, The Sun's tears that had laid dormant in the ground for eons, shot up into the sky almost like a sky full of stars. And with that, we hatched, beginning to live in this strange new world".
"The Moths had spent many generations building up the kingdom we live in now and began to explore these strange lands, but not all that of love and light came from the Sun, with the Earth being in darkness and inhabited for so long, the dark creatures had emerged as a result of the Sun's disappearance and they seem to be interested in us or perhaps something that we have. They suck out all the light that's left on Earth and that includes us".
"You know first hand what the dark creatures are capable of," I added.
"Yea, unfortunately, I do... However, I'm forever grateful that you were there to save me that day". Nym admitted, She had a look of guilt on her face. I know she's always held onto a feeling of shame because of that fateful day. It was never her fault though. She was only a kid and she didn't know any better, I think she wanted to prove to the other Moths that she could be brave and go venture out into the darkness, past the boundaries of the kingdom, where the dark creatures lie.
"H-hey Nym, it's okay! I'll always be here for you... but only for as long as you make me those yummy herbal teas," I teased.
"Oh HEY! That's not fair, what if I run out of tea?" Nym proclaimed, eventually catching on to the fact that I was teasing her.
I burst out into laughter, she's so cute when she gets all worked up.
"Hey..." Nym asked.
"Yea, what is it?" I replied back. 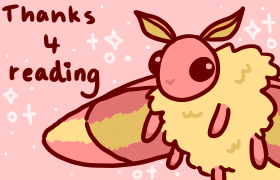 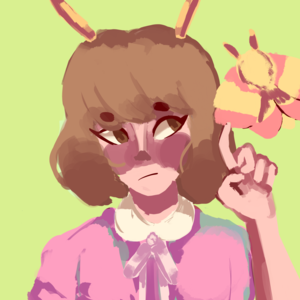 This is the first chapter of Night Butterflies! I've decided to create a novel instead of a comic series as I just have so much I'd like to share with you and I feel as though a comic would limit me. I will include pictures in my novel series and I hope you like them. Thanks for reading <33 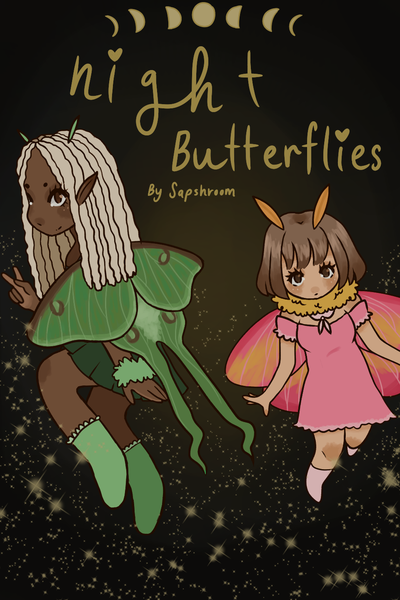 After the death of the beloved star, The Sun, an entirely new form of life begins on Earth. Moth creatures that were formed from the very essence of the Sun are perhaps the last remaining hope for Earth. Night Butterflies is a series comprised of short stories following along characters; Luna, Nym, Attie, and Cinnabar on the ongoing fight to protect the Moth Kingdom from the Dark Creatures who seek to absorb the light from everyone and everything.
Subscribe 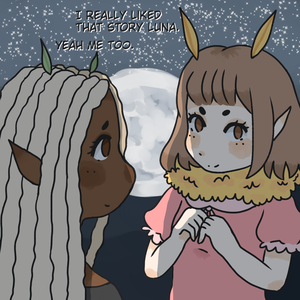