Priestess of the Dragon Tree

In the center of the lonely realm sat a majestic tree. It towered over the land like a mountain, its boughs casting shade across the desolate city and lake at its base. Most of the people of this land left centuries ago. Only the dragons could be found, living in their cities built within the mountains encircling the great tree.

The dragons have always ruled this small realm, and in this era, it was solely the dragons who remained. Thus, the realm was named after the great tree at its center and the dragons who guard it fiercely.

The Realm of the Dragon Tree.

Verene trekked across the land to arrive at this realm, to the Dragon Tree at its center. She evaded the dragon guards at the opening in the sky wall to the east and avoided their sights as they flew overhead as she traveled across the plains, crossed the lake moat, and walked the hollow city. And arrived at the grand tree's base.

A former knight of the realm bordering the Realm of the Dragon Tree to the east. The Realm of Avanin. Verene was a member of a species named after her home realm, an Avanian. Built similarly to the human and elves that populate the realms to the far southeast, past the Ashlands. The Avanian stood out with their feathered ears. Verene's ear feathers were a pale spearmint color, nearly white, with a single grey barring passing through. Some small markings made up of downy grey feathers formed several sideway crescents beneath her dark purple grey eyes. Her long hair was a darker, more vibrant green color than her feathers.

Verene took it upon herself to travel here to have the chance to be welcomed home. Or at least to wait out the temporary banishment placed on her by the king. As atop the Dragon Tree rested a temple, built by the people of this realm millenniums ago. Records of the people who left this realm three centuries ago for Avanin showed that a special artifact might be located within the temple.

An artifact that could cure many diseases. If Verene could find it. She might be able to cure the sickness of a dear friend, and also pacify the king should his fury yet to abate after she returned home.

She donned her mottled ashen grey and brown cloak. Her journey was far from over. Any passage up the tree was long gone with time, overtaken by the tree without a nature mage to redirect its growth. The former passage at the base was blocked by wood and fallen stone. Fortunately, the bark was rough and filled with crevasses for Verene to hide or rest in as she climbed. Should a dragon pass by. Verene would blend right into the bark.

After two days of climbing, Verene neared the summit. The tree swallowed segments of the walls of the temple at this level as it grew around it. Amidst the bark an opening appeared, showing an aged stone window, fragments of glass still tried to cling to the frame although much of the glass lay shattered within. The window was large, so Verene hoisted herself through, taking her first steps into the temple.

The sound of wingbeats outside startled her. Her heart froze as she darted behind some rubble. To make it this far and be found would be an embarrassment for all the effort Verene put in to make it this far. Even if Verene could fight them off with the large sword tied at her waist, not even a former knight like herself could dare to fend off the dragons if they called for reinforcements and swarmed the temple.

“Did you see any movement there?” A voice sounded alongside the wing beats.

“I did not. Is there a problem, Sevna? Perhaps it was a bird?” Another dragon flew nearby.

Sevna hovered outside the window.  Plants covered the rubble, from the openings amidst the stems and leaves, even from her hiding spot, Verene could see a dragon with cream and brown markings like a sparrow land just outside the window. The dragon was covered in feathers with a body built like a wolf, its head a mix of beast and bird with a beak-like muzzle. Tan horns sprung from its head with several prongs going back. Its bird-like feet clasped onto the stone, and sharp talons held it in place as it stuck its head through the window.

The window was large enough that Verene could fully stand within its arch, but the dragon could only fit its head inside. As the dragon was too wide to fully fit through. Its wings spread out to balance itself as it looked around.

Verene curled up, shrinking herself behind the rubble, and waited with bated breath.

“Was it a bird?” The dragon still outside asked.

Sevna looked around but saw nor felt anything astray. "Nothing amiss. Fioni, I really thought I saw something."

“We’re right next to the Holy Tree. If anything meant ill here. The Tree would have allowed us to sense it. A bird or beast will do no harm within. Let’s go. We still have our rounds to finish.” Fioni commented

“Right.” Sevna felt reluctant but pulled their head out from the temple.

The sound of Sevna and Fioni’s chatter faded into the distance. Verene let out a sigh of relief as she left her hiding place.

The temple was vast. Verene needed to start her search immediately. The sooner she finds the artifact, the sooner she could return home and her friend be healed.

The building was barren. A discovery that worried Verene as she walked through the halls. But her venture within covered a small part of the temple. Only the intricate carvings within stone and plant life filled Verene’s sights. She walked deeper into the temple. She aimed to reach the temple’s center, directly atop the tree’s trunk.

Verene arrived at a large, circular room. Giant arches rose up from the edges, meeting in the center, high above. The gaps between each arch allowed sunlight and wind into the interior. The sound of the Dragon Tree's leaves and the trickling of water emitted all around.

An ornate fountain furnished the middle of the room. The water still ran even after all these years of abandonment. If the water was sourced from the lake at the base with plumbing that managed to remain functional all these years or originated from some form of magic, Verene could only guess as she walked up to the gaze at the crystal-clear spring water.

The water of the fountain slowly spread out through cracks in the tiles. Once a pristine and elegant pattern carved out to lead water to other parts of the temple. Now cracked and feeding moisture to the moss that grew within every portion of shade in the chamber.

With a freshwater source and centralized location, this would function as a good place for Verene to begin her search for the healing artifact. She gazed up to the several stories of balconies along the room’s rim and pondered if she should begin at a higher level and work down.

She paused. Verene spotted a movement amiss from the small creatures she had seen within the temple’s interior so far. A woman, an Avanian like Verene, walked along the balcony just one story above. She had emerged from the halls and had yet to witness Verene.

There was no place to hide in the room's center. Verene watched the woman. She knew she would encounter dragons when she ventured into this realm, but not one of her own species. Was this another who sought out a treasure of the temple? Verene might be able to work with her, as she likely would not be too terrible if she could wander so casually under the noses of dragons who could sense dark emotions.

The woman above had yet to take a glance towards the fountain as she silently walked. Verene decided to leave the chamber and observe the woman before confronting her. As Verene took a step, the sound of her footfall upon stone, yet quiet, disturbed the melody of wind and water.

The Avanian above looked down. Even from this distance, Verene could make out the look of surprise amidst the woman’s eyes, colored a gentle brown like honeyed amber. The woman gripped the handrails of the balcony as she stared a Verene. Verene resisted the urge to grab the hilt of her sword, she should wait and see what the stranger does. Anyone who could ascend the Dragon Tree was not someone to be taken lightly.

As the woman watched Verene, she suddenly jumped directly over the balcony railing and descended to the lower level. 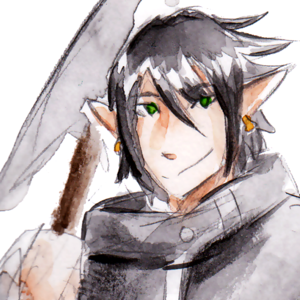 Adagsddhj, I'm super pumped to be back to storytelling. Finally convinced myself to try writing instead of drawing comics two months ago, and here we are with a finished story (well finished for me at least :p). Anyways, I'm excited and bit nervous since its been years since I last really tried my hand at writing prose, so I hope y'all enjoy this short little adventure. 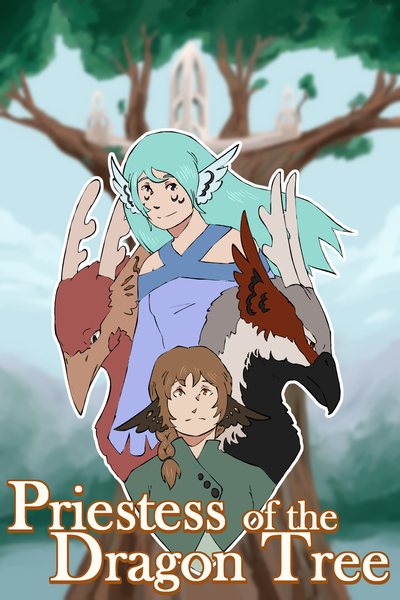 Priestess of the Dragon Tree

Verene travels to the neighboring realm to seek a powerful artifact of healing rumored to be located in the abandoned temple at the top of the Dragon Tree. 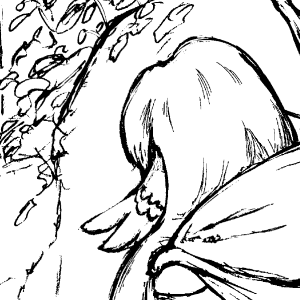