Tales for an October's Eve

Arthur Watson swore softly as he stepped out of the pickup truck, pulling his jacket closer against the early November chill that instantly slipped through every small gap in his clothing, and even some places that there weren’t any gaps.

“I reckon it’ll snow soon,” Angie commented as she stepped down from the driver’s side. “I’m kind of surprised it hasn’t already. Well, it has. But just a couple of overnight dustings that melted off as soon as the sun hit. Still, reckon it’ll be a cold one this year, had to have my husband out covering the geraniums a lot earlier than normal, and I tell ya he didn’t like having to go out and do that one bit.”

“What do you make of these tracks?” Arthur interrupted. He’d already moved off and started inspecting the ground in the small clearing where they’d parked off the side of the dirt road, really nothing more than two strips of bare ground with a bit of knee-high grass in the middle, that branched off the highway and wound through the forest. It was the fifth such trail they’d followed so far. Arthur hoped it would reveal more than the others had, and if his hunch about the tracks was correct, then it might be what he was looking for.

“That much, I figured,” Arthur replied, suppressing a sigh. “I was hoping you might have some insight into what type of vehicle. Judging by the size, I assume it was larger than your pickup.”

“Probably,” Angie replied, shifting the holster on her belt as she squatted down to take a closer look, “Most likely from some logging machinery or a trailer. These dirt roads we’re following are logging trails, you know.”

Arthur did know. Angie had mentioned it three or four times on each track they’d followed that morning.

“But then again,” Angie continued as she stood and looked over the rest of the large clearing, “considering there hasn’t been any logging in this area for the past few years, that’s doubtful. And there’s another set of ‘em there. And there. Huh, all the way down this clearing. And look there, looks like someone parked their car there.”

Arthur, who had continued walking down the clearing, pointed to the ground. “There’s a bit of oil here. Looks like a whole row of cars was parked here."

"Could have been a bunch of high schoolers having a party out here, but they usually use the fire trails on the other side of the highway, out west of town.”

“The spacing of the big tracks, lines up with where the cars would have been parked. Got some drag marks there, too.”

“Tow Truck,” Angie agreed. “But why would they need to tow so many cars from here? And if they towed those cars, what happened to the people who were driving them? I’d have heard an earful about it if that many people had come into town after losing their cars out here, so they never went into town, which they would have; there’s nowhere else out this way they could have gone for help. So it’s possible that they never left. Which means they’re still out here.”

Arthur had come to the same conclusion, though his thought process was of an internal method, rather than talking it through. “So, now do you believe I have valid reasoning on my missing person case?”

Angie nodded, but answered negatively, “No,” then paused, still nodding, “I think you brought me a whole mess of missing persons.”

“I hope you have more experience tracking in the woods than I do,” said Arthur, “I’ll admit I’m a bit out of my element here. Shall we get started?”

“We’re gonna get started by sitting right here,” Angie said. “We’ve got possible multiple missing persons out here in the woods, we’re going to need more than just the two of us to conduct a search. Being as they’d have been out here what, three days?”

“Four days. If we find anyone, they might need medical attention. I’m gonna need to radio this in, bring out a search party, Deputy Jimmy, and an ambulance, just in case.”

In the end, they’d had to drive back to almost to the highway before they were able to get a strong enough signal to call out.

“Now,” said Angie, once she was finished, “How about we go over what brought you into this case one more time?” She pulled out a small recording device. “For the record this time.”

Arthur nodded. “A Youtuber who goes by the name JSkel is known for his livestream. He’s not extremely popular, but is considered one of the rising stars. Personally, I don’t watch his channel, but I know several people who do, one of whom brought this case to my attention. It appears that JSkel’s livestream suddenly stopped four days ago, on Halloween. Now, that in and of itself was no big deal. He was in the middle of livestream out in the woods, and it just cut off. Most people figured he’d just hit an area with no signal; it happens. But his video channel never resumed. The thing is, he’s on constantly, whether it’s via webcams in his home or Gopro or cel phone video while he’s out and about. He hasn’t missed a day in four years, and that includes when he had a surgery two years ago. There is some speculation that it’s all a stunt for publicity, but two days ago he missed a meeting with some potential sponsors, big name companies, and the rumor is that he was looking at a deal worth a couple hundred thousand dollars.

“My friend, who is a fan, contacted me yesterday and brought this to my attention. Based on the geotag off a couple of photos on his Twitter account, and viewing the last few hours of his livestream—- they’re all still up on Youtube— I was able to place him in town, filling up his tank at the station on Main Street in the evening on Halloween. There’s a little jump in the video, it picks up with him leaving his car, quite likely here in this clearing, and setting out on a trail into the woods. It’s not long after that the video cuts out.”

“Deputy” Jimmy turned out to be the detective of the day. As they’d been combing the woods, he’d suddenly veered off through the underbrush for a short distance, stopping as he reached a large pine tree, and waiting.

“In there?” asked Jimmy’s handler.

“Angie?” the handler called out, “I think Jimmy’s got something, might want to come check it out.”

Angie, Arthur trailing behind, met Jimmy and his handler at the outskirts of the drooping pine branches. Angie pulled a branch aside, and Arthur followed her, ducking into the small hollow around the bole of the tree.

Arthur breathed out heavily, and looked up, away from the decapitated body.

“All of my cases have been petty crime and… shenanigans,” Arthur groaned out, intent on the branches of the tree above. “This is the first time I’ve seen a body. A live one, anyway. I mean, a dead one, but in real life, not just in crime scene photos.”

“Think this is your guy? Grayskull?”

“JSkel,” Arthur corrected, looking back toward the body. Angie thought he looked as if he might throw up, but he managed to keep it in.

“The clothing matches what he was wearing in the video as he left his car, but that’s not a positive I.D.” Arthur turned back to the tree branches. “What’s that?” he asked a moment later.

Angie looked up from where she crouched at the side of the body, following Arthur’s gaze into the branches above her head. She reached up with a gloved hand and pulled the small action style video camera from where it was tucked in the branches. It was about the size of her palm, in a waterproof case.

“Were you looking for this up there?” she asked.

Arthur looked a little sheepish. “No, I was just… trying not to look at the body.”

“Battery’s dead,” Angie said, pressing the power button. “We’ll have to charge it up back at the station, see if it can tell us anything.”

In the end, it told them just about everything. 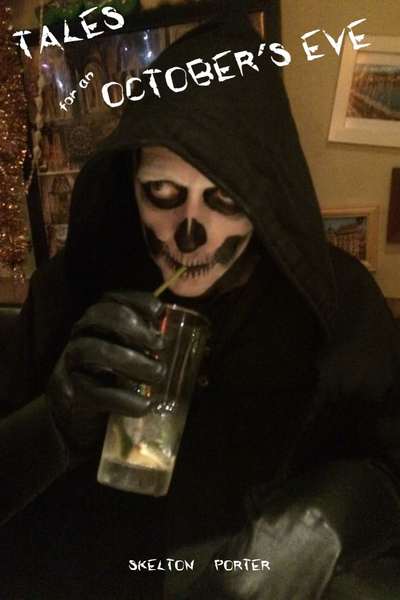 Tales for an October's Eve 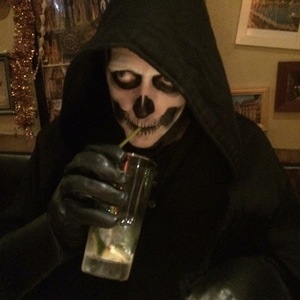