Oh fuck, are you the original creator? If so, I wanted to tell you I fucking love this comic. I'd passed over the website years ago and finished it all in... two days? Something like that. Anyways do you consider ever continuing this comic? 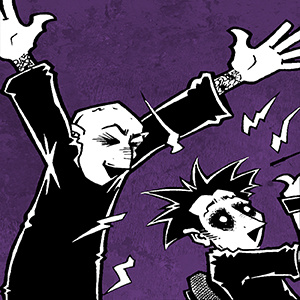 Did you ever wonder what it was like to go to that one spooky club in your city? You know the one. The place packed with “creepy” guys in the top hats and frilly white shirts along with those hot girls in vinyl corsets and not much else.

Now you can catch a glimpse into that world with Writhe and Shine and enjoy laughing with those people [instead of at them] whether you’re Goth or not.

The Bastille, the coolest goth club in the country, is where Writhe [the new deejay], Shine [the sullen barback] , Boo [the sensible bartender], and Sven [the drunken owner] work and pass time. Coffee, clove cigarettes, scene politics, bitchy ex-girlfriends, and bad song requests are just a few of the aspects of their daily lives in this amusing and heart-felt look into the goth scene. Even though this comic is based in New Orleans, it accurately reflects any city where the kids wear black on the outside to show you what they’re feeling on the inside.
Subscribe 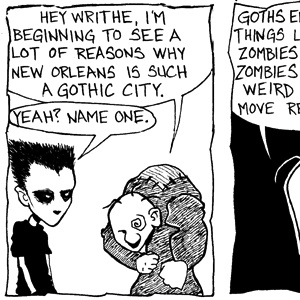