Running is as close as humans can get to flying. At least, Red thought so, as she flew her way from what should be a humble abode, a protection from the darkness and horrors of the deep forest that it borders, a ticket to a new world. Instead, it was dripping with a whole new red, and Red couldn't stay there any longer.

The burning in her lungs may have distracted her temporarily from the heaviness of her heart, from what she just saw. She didn't even know if anyone else survived the incident. She didn't know if she deserved to be living, able to find a way out.

It shouldn't have turned out like this, Red thought. Just under two hours ago, if she guessed correctly, everything was fine, how it used to be. She was safe, in her village, talking to the others and staying with her mom. Two hours was all it took for this to happen.

Back at the small village, Ruby Vanderwood (otherwise known as Little Red or Red, because of her particular attachment to all things scarlet) was known for her nimbleness and speed. She was the one you'd go to if anyone needed someone to run errands for them. As long as they made sure she didn't get distracted by the many things going on, such as different animals, plants and the other villagers, their job would be done.

She loved it too. The wind makes her hair feel like a black velvet flag, her scarlet hooded cloak flowing behind her. To her, it was the best feeling in the world, being able to outrun any sadness and embrace freedom. Sometimes, Red would wish to be a bird, and to be able to fly in the sky anywhere she wanted.

One day, Red's mom asked her to drop off some desserts she made. Red's grandmother at the border where the plains met the deep woods, and not everyone could make the trip there. Ms. Vanderwood worked long days as a baker, making sure that everyone could have her delicious breads and pastries. In the end, Red became the bridge between her mother and her grandmother, as only someone like Red would enjoy regularly taking the trek to the house near the woods. So, just like any other day, Red kissed her mother goodbye and, basket in hand, started on her way to Grandma's house.

She didn't quite run until she knew she was getting close. The plains were calmer, and Red knew that as long as she went faster later, she could take the time to walk through the plains. Once Red saw the familiar sight of the oak and birch trees over the horizon, she she broke into a sprint, letting the familiar background colours blend, starting to look like a painting that her neighbour would likely created. However, Red could have sworn that she saw a dark figure in the corner of her sight. She had been through the plains for years, and she never seen any animals other than the occasional bird that would fly over. Red started to be more cautious, looking around more to make sure that whatever that was didn't follow her.

Red slowed to a stop when she reached her grandmother's house. It was a smaller, but cozy abode, with red brick walls and a grey roof. Grandma's clothes were hung on the laundry wire, so Red could tell that she was home. She knocked, three firm taps, but there was no sound. It was strange, Red could see Grandma's laundry and the chimney letting out grey smoke. Red shrugged it off, assuming that Grandma must have been too into one of those really thick classic novels that Red's mother gifted her. Red used her (usually emergency) key to come in, and placed the basket of sweets on the kitchen table. However, Red noticed that something was off.

Grandma's shoes weren't at the door as it usually would be if she was inside, but her tap was on (Grandma was a stickler for water conservation) and the oven had new firewood burning. Red then turned to call for her. Maybe if she heard her granddaughter speaking, then she would reply. Besides, Red would do anything to quell a feeling of dread that was washing over her. "Grandma? Are you home? It's Ruby!"

Red heard a faint voice say, "I'm on my way dearie, just wait," and she realized the voice was way too forced to be her grandmother's. Grandma's voice was akin to twinkling bells, dainty and as sweet as the desserts Red brought. This voice was rough, sounding more like rocks being scratched against each other, and like it was putting on a show. Red turned towards the bedroom's entrance and saw a dark figure, dressed like her Grandma but way too tall and way too furry and with big bloody teeth and eyes and everything, she turned around and bolted. She couldn't help but scream, her grandmother, a wolf, it was too much to see, to bear.

Her screaming attracted the attention of a nearby lumberjack, and she hears the sound of an axe chopping something hard, and she doesn't know what happened behind her, but she knows it was dangerous. Red also knew that it was something she didn't want to see, as she continued on.

Red didn't know where she last turned or what route she was even taking, but she knew that wherever she was, it's better than there. So she continued on that path, taking twists, turns, and getting herself even more lost, but that didn't matter. Red needed to get away, and even though it was dumb and most likely even more dangerous, her fear overtook her logical and smart side. She would turn back eventually, but she didn't want to see what she saw again. 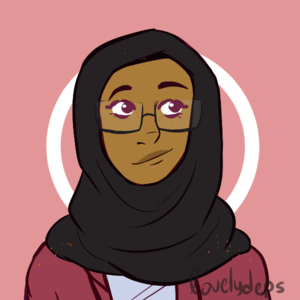 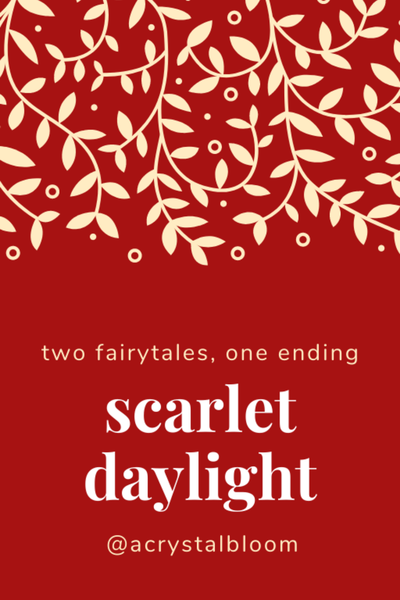 Ruby Vanderwood thought this day would be like any other, living life in her small village on the outskirts of Enchantia. She never expected to find herself in a secluded home in the woods with seven dwarves and the most beautiful girl she's ever known.

An extension and retelling of two common children's stories, where Little Red finds a new story, Snow White finds companionship and both find love and a place in the world.
Subscribe 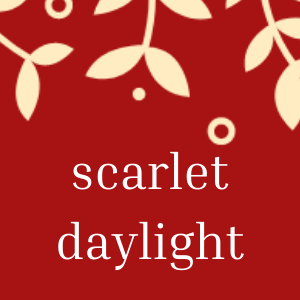